Things have been pretty quiet on the hobby front recently, with work pressures taking their toll. I've managed a few Friday games with Keith and the gang, but there's been all too little time to post on the blog. There's been some painting going on, and with the most recent bases completed today I realised I'd managed to make good progress on the current project - a DBR Ottoman army. I  bought the figures quite a few years ago, and painted up a DBA army, with plenty of figures left over. I'd promised myself for all that time (at least 10 years) that I'd complete the DBR army at some stage. So here's the progress so far (not including the bases that I'd painted up for the DBA army.

So far, 7 bases of Feudal Sipahis, 6 bases of Janissary archers, and 2 artillery (s). 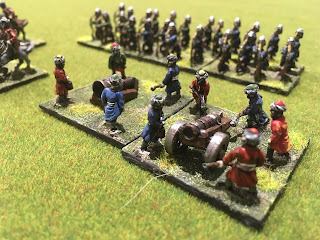 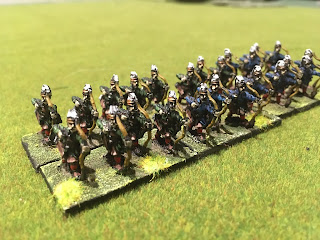 How do you complete any and all such 'gaming army projects? One base at a time.

In our evening of HotT gaming, Andy and I now pulled out two different armies. For me, the Pirates, for Andy, his Undead.


The Undead had now lost their general and more elements than the pirates...  but what a great game.

Our first HotT games in a while, and Andy brings along a new army - Martians. The figures are strictly 15mm, but .. hey.. maybe it';s just that Martians are shorter beings than the humans. We decide to pitch my Weird World War 2 Soviet army against them.
The Soviets are:

I can't recall Andy's composition, but it included a behemoth in the form of a 'tripod' al la HG Wells, and a Hero. 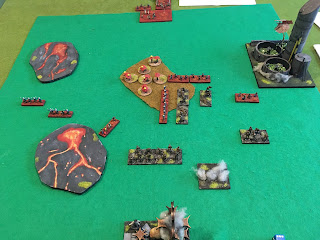 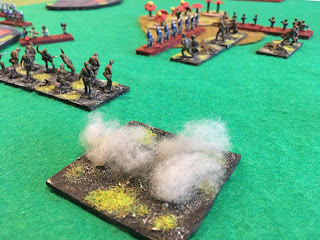 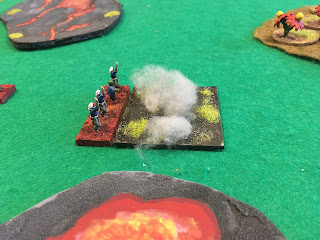 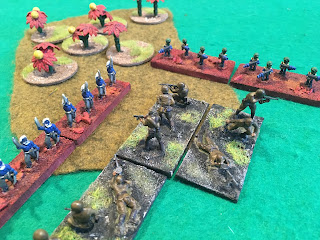 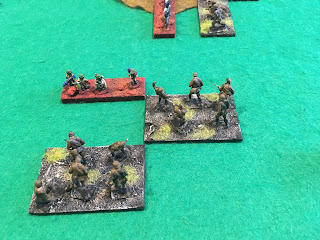 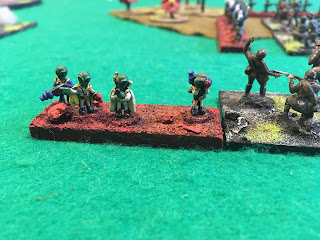 Finally the Martian army defeats the Soviets.. description is a little thin as we played the game over a week ago, and the memory 'ain't what it used to be'... but what a battle..

We don't get to play Great War Spearhead games very often. This week was an exception, with four of us coming together to fight the historical scenario 'Action around Mallwischken' from the 'All fine men' scenario book published by Shawn Taylor and Robert Dunlop.


However at this stage, the 3rd German regiment is forced to take two consecutive morale checks (it's casualties took it past the 50% and 66% marks all in the one turn), passes the first but fails the second.

While the German reserve had been committed to shore up the left/centre, the attack had clearly run out of puff. Withdrawal is the only option.

So, clearly Keith and I (commanding the Germans) had forgotten how to 'attack' in GWSH. I have to take the responsibility for that, having drawn our attack arrows too long, too far. This drove the attacking regiments onto the Russian defences, and the casualties were basically catastrophic. I know that I was cursed with poor die trolling with the attack on the right, but that is hardly a 'get out of jail' excuse. The attack was poorly planned.

But what a great game. We had forgotten that the simpler range of weapons systems inWW1 games means that games play faster than their WW2 and Modern equivalents. The game was played with my 6mm forces, all modelled using figures and guns from the Irregular Miniatures range.