Now and then we all probably become motivated by the 'f' word in 'gaming: 'finishing'. 'Finishing' has been my bye-word for the past few months, so those 6mm WW2 Brits have been painted to give me a full WW2 Spearhead British Regiment. The remaining few 1982 Brits bought to pad out the BAOR army have been painted and based, so the Milan teams have their FV432s, and the Blowpipe teams now ride in their long awaited land rovers.

And I finally got around to seeing Stan to buy that box of HaT Austro-Hungarian heavy weapons to finish the regiment of 1914 Austro-Hungarians for the Eastern Front Project. Now the AH regiment was never intended to be more than a nice visual supplement to the Germans, although I may be tempted to add some field artillery from the Hat Range, and there are the mortars in the box that could be painted up to morph the force into 1915/16. But at this stage the project has taken that next step towards completion, towards 'finishing'. There are now 4 stands of MMGs (I only need 3 for the regiment, but it seemed silly to only paint 3 of the 4 in the box) and a FO stand (and that in itself may be an argument for buying some AH artillery as well). 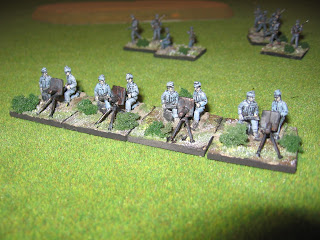 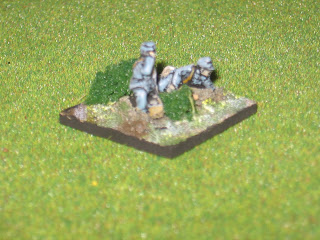 So here is the full regiment in Great War Spearhead terms. 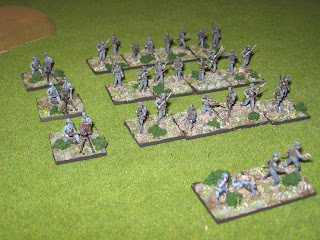 There are more Russians to be painted to flesh out the first Russian division to full strength (and then another division to allow for an 'attack' force under the scenario generation system), but at least this is another milestone along the way. I am determined to play out some games set on the eastern front 1914 in which I don't use proxies in place of the correct figures.

And the 1944 British are ready to go (although there is the Typhoon air support, and another couple of AT guns, and the Sherman regiment to replace the Cromwells and.. ). But the BAOR army is pretty much there finally. It just needs an opposing force .....

Currently on the painting board though is a batch of assorted dwarf figures that I bought last year to act as unit fillers for the Kings of War Dwarf army. And this is all leading somewhere: last month I bought the figures to start a Kingdoms of Men army for Kings of War: some of those lovely Perry '100 Years war' infantry, and some Fireforge Medieval knights.

And I may have to do something with those very old painted but badly based 20mm WW2 Russians so that Nick and I can try some mid war eastern front Spearhead actions. Base the infantry, and, oh, there isn't anywhere near the amount of armour I thought I had, so a few more vehicles and AT guns etc....