I recently finished reading the second of the two Mark Urban books on the early history and development of British army tactics and the modern British soldier. Having read ‘Fusilier’ several months ago I managed to buy a copy of his book ‘Rifles’  too. 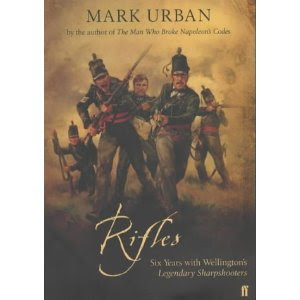 Urban writes in an eminently readable style, using primary source material to build his case. As with the earlier book ‘Fusiliers’ he has accessed primary source material that has possibly not seen the light of day before, and describes the progress of the 95th Rifles through the ‘Peninsular’ campaign to Waterloo. This is not a history of the campaign itself, and so Urban provides only general information on facets of the campaign that did not involve the 95th Rifles.
From his Preface to the book:

‘In recounting the six year journey to Waterloo with them it is also my aim to give the reader a great deal of information about the realities of life in Wellington’s army and to establish the 95th’s pivotal role in creating what we might now recognize as a modern British soldier. It is not a general history of the Iron Duke’s campaigns nor of soldiering in the Napoleonic era, so the wider themes are always tackled through the experience of soldiers of the 95th Rifles. I make no apologies for dispatching the Battle of Salamanca, perhaps Wellington’s greatest battle, in a few short sentences, since the 1st/95th played almost no part in it.’

I can do little better than to quote several of the review quotes form the back cover.
‘If you like Sharpe, then this book is a must.’ Bernard Cornwell.
‘War unplugged – vicious, chaotic and raw.’ Gerard DeGroot, Scotland on Sunday.
‘As dashing and unconventional as the legendary unit itself.’ Andrew Roberts, Literary Review.
As with the earlier book, if you have any interest at all in the development of tactics in the Napoleonic wars, then this is a "must read".
at September 18, 2010 2 comments:

Email ThisBlogThis!Share to TwitterShare to FacebookShare to Pinterest
Labels: history, Horse and Musket

Ypres, and the Menen Gate

Another day in  and around Ypres in Flanders, and another day for insight and understanding. Visiting the cemetery on the Messines Ridge was not only the usual moving time with too many names on head stones, but also as we'd already seen, a good demonstration of how the ridge dominated the surrounding countryside. This first photo taken from the cemetery looks down onto the low ground that the allied forces occupied. From this vantage point an observer can see everything that goes on down on the flat. The vulnerability of the British army is very clear. 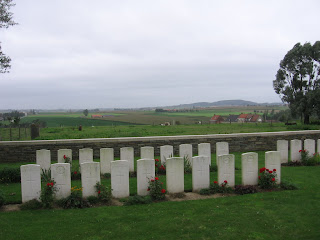 The entrance to the cemetery. 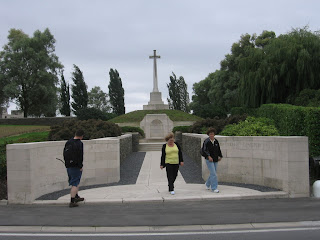 We spent most of today 'stooging' around in Ypres itself. This is the famed Menen Gate in Ypres (Iepers in Flemish), seen from outside the old mediaeval ramparts of the town. 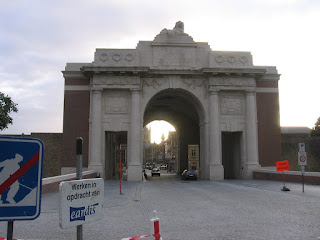 We made sure we stayed on for the 8pm ceremony. Here the crowd is gathering, this is less than one quarter of it. 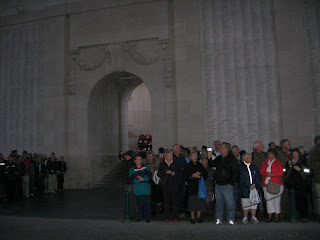 On this night four buglers marched out and played Last Post, and Reveille. 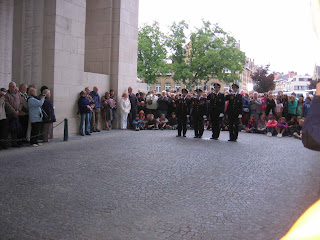 I was going to take some video, and many more still photos, but frankly it felt inappropriate. The ceremony is a genuine attempt at honouring the memory of the hundreds of thousands who died defending the Ypres salient; I thought that I should honour their memory too, and so I put the camera away.
at September 16, 2010 1 comment:

We spent yesterday (Tuesday) traveling the length of the Ypres battlefields, from Messines to Passchendaele with Robert and Angela Dunlop. It was fascinating. It is really only when you walk the ground that you can really appreciate what this was all about.  I had never realised just how significant the Messines ridge, and the high ground on which Passchendaele Village, are. When you are down in the low ground the nature of the terrain is so subtle that it is hard to realise the significance of the high ground. It is only when you get onto the ridges that you can see how totally they dominate the low ground below, and therefore the town of Ypres (Ieper). It was little wonder that the commanders of the time thought that these piece sof ground were worth so many lives (it is easy to sit in judgement of that belief with the benefit of hindsight of course).

We ended out ravels for the day by visiting Tyncot cemetery, on the Passchendaele Ridge. It's the largest CWGC cemetery in the world, and holds graves, and far more memorials carved in stone, for so many names. 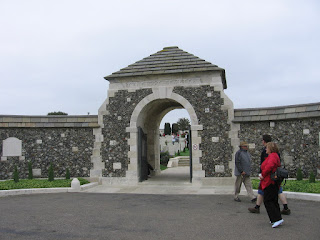 The view from the cemetery out across the plains below. The spire of the Cloth Hall (as it was known) in the centre of Ypres is between the two trees close together about a third of the way across the picture from the left. 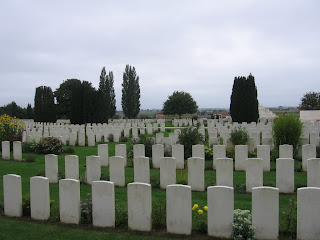 We left Tyncot pretty quietly. The last time we felt this way was when we saw the memorial at Thiepval. While I started the visit with the clinical interest of history, it seems impossible to come away without being profoundly affected why the scale of human a\sacrifice that was involved.
at September 15, 2010 No comments:

Journey in memory of a tunneler...

When we began our current trip we had a specific personal goal in mind: to re-visit the grave of a great uncle of mine who had died in World War 1. I blogged some time ago on Uncle Jack, and we first visited his grave in 2004. He was a New Zealand tunneler who is buried in Arras, at Fauborg d'Amiens in Arras. Jack died on 2 October 1917. We made a personal commitment to getting back there to do two things: to place a poppy against his headstone, and deposit a photo of him in the Commonwealth War Graves Commission register. We managed both of these. 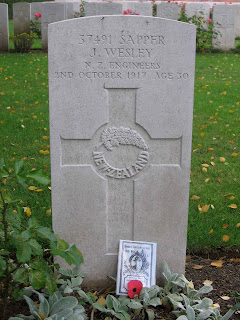 What we hadn't noticed on our first visit was the headstone of another tunneler from the NZ Tunneling Company who died on the same day. 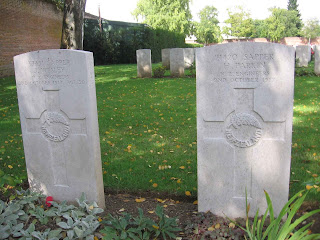 You see, I am intrigued to know how Uncle Jack died. Why? I'm not really sure; perhaps morbid curiosity; perhaps it's just that I will feel that as one of the millions who died, he would at least like his family to know what happened. And now there are possibly two men involved in this puzzle. I have looked at official records and unit diaries, but at this stage have no idea what happened.

It was poignant to stand there again, and yes Jack and I had a wee chat I guess. It was hard to walk away actually, and I have to admit to having placed a hand on the stone for a few brief moments before we left.

In 2007, on the 90th anniversary of the Battle of Arras, a special memorial was opened that paid tribute to the work of the NZ Tunneling Company. These men were given the task of taking the centuries old tunnels that had been used to extract the chalk rock, and develop these into rest areas for 20000 men prior to the Battle of Arras that started on 9 April 1917. The NZers added 20km of tunnels, and built caverns that were capable of holding these 20000 men. The memorial (it';s not just to the kiwis) included the opening up of some of these tunnels, including the 'Wellington' chamber that held 1500 men (the 'Christchurch' tunnel was apparently capable of holding 4500 men.. wow!!)

The entrance to the memorial 'Carriere Wellington'. 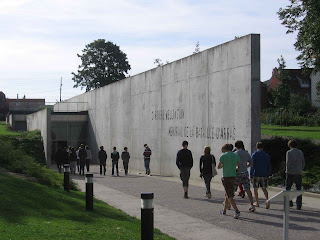 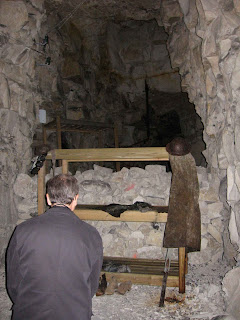 Lorraine standing at what is believed to be the site of an underground church service held before the assault on 9 April. 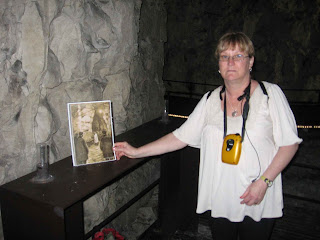 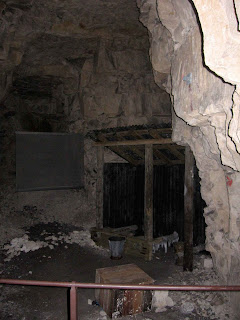 One of 15 'exit' points from which troops emerged very close to the German front lines to start their assault. 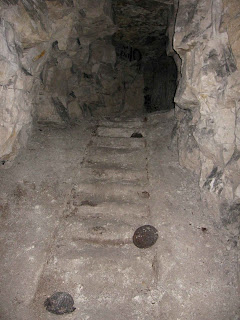