Workload and flat camera battery (the one that powers the clock) have both meant not much 'gaming and not much photography these past few weeks. But... we are back, with a Kings of war game, Humans vs Dwarfs. And brought along his Humans ad they faced off against my dwarfs, both armies sitting astride a river.

This photo of the battle field shows  a little of the initial deployments, the Dwarves on the right, and the Humans on the left. I secured my left flank with a Warrior regiment and a steel behemoth, and m y right with a Horde of warriors. Andy held his centre with a thick line of bow bolstered by a couple of units of foot guard. His flanks were taken by his three units of knights. 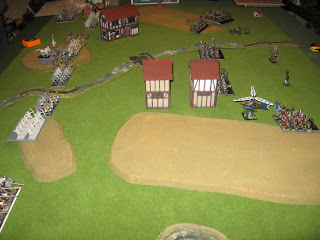 The Dwarf centre advanced to a position where it's left flank was guarded by one of the two villages on the battlefield. 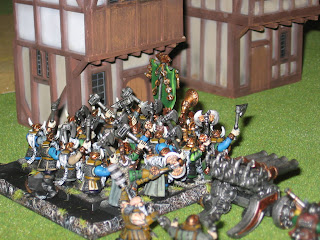 Andy decided to try a flank switch and move one of his units of knights from his left to is right. Arguably it cost him a victory because this unit was out of the game until the last move.
The gap in the human line marks the position of a unit of Foot Guard that was shot away by concentrated dwarf fire. Two of the supporting archer units had also disappeared under the weight of dwarf fire. 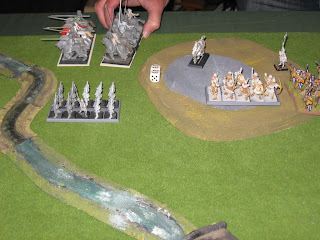 He advanced his right wing knights unsupported, and for the first time ever my steel behemoth was able to get its flame cannon into action.. YES!!! 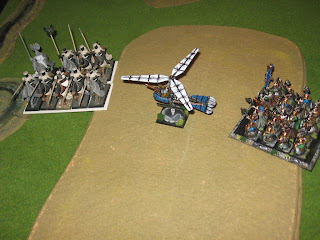 Andy attacked the steel behemoth, but failed to break it. The behemoth and a unit of warriors then attacked the knights and destroyed the unit. This allowed both units to swing further around onto the human flank. 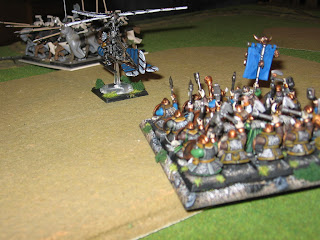 However a late reinforcement (the wandering unit of knights) finally arrived, attacked the behemoth and finally destroyed it. 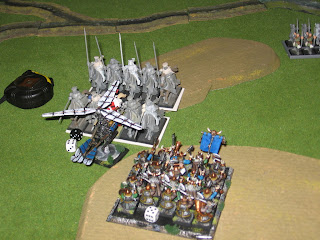 The main battle lines never met, and after six turns, the game was  a draw. 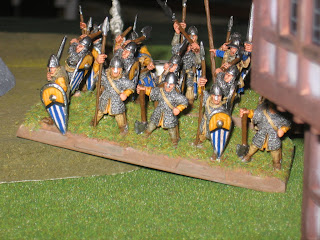 The Dwarf king was slightly annoyed that his troops hadn't given him the victory he'd wanted .. next time!! Grumble grumble!!! 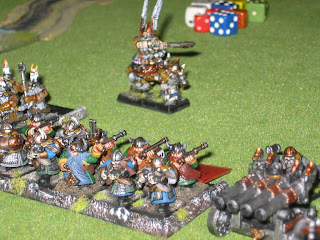