More as evidence that I haven't altogether stopped painting, here is the latest batch of work: some Orx for Warpath (or 40K for that matter). These are 2nd Edition Games Workshop Orcs that I picked up second hand at a briong and buy a few years ago and, having tried a game of Warpath before Xmas, I tough that adding these to the existing Orc army would give two matched table top armies.

The larger Orc at the back was a free giveaway with White Dwarf magazine several years ago, and has sat on my painting table ever since, begging for attention. He'll be the troop 'leader' for a Warpath platoon. 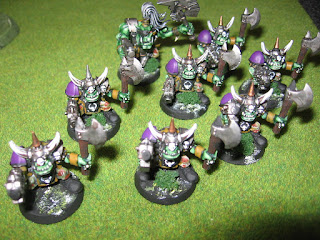 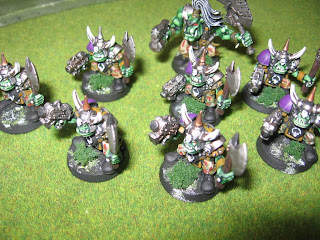 Mind you, not sure how much longer I can hold out, with the Perry and Fireforge figures (for the 'Kingdoms of Men' army designed for play with the Mantic 'Kings of War' rule set) sitting there waiting since April 2012, and me all fired up after reading the first of the George RR Martin novels "A Game of Thrones'... damn this inspiration thing.
at January 26, 2013 3 comments:

The 20mm WW2 Russian army for Spearhead has been in its final throes. In the context of the Russian army in Spearhead, artillery is not very flexible in terms of its immediate response to battlefield needs (as distinct from pre-planned fire etc). Consequently I tend to take artillery s on table rather than off table. This means that at the very least judicious positioning can mean that the guns at least see action, and so scenario army points aren't wasted. To do this I had to model two on board artillery regiments (the number I'd need for the largest 'Attack' list I have tried so far), in Spearhead terms modelled by two stands of 76mm guns, and one stand of 122mm howitzer.

The only kit we could locate for the latter was the PST kit, so I bought one to give it a try. This may not have been my best buying decision. The kit parts often didn't fit, there was  a lot of brittle detail, and for some reason the plastic didn't seem to glue as well, meaning that I would have to glue one part, leave it to harden for a day, and then try the next etc. When assembled, the gun position was really only suitable for the towing position rather than appearing as deployed, and so I had to doctor up a base with a hump at the front in order to try to represent an even partly reasonable firing position (it's still wrong though). I began assembling this single gun before Christmas, and have only just finished it mid January. It feels as if I've been making this one gun for an age!!! As the average teenager might say, 'I'm so over it!!'.

All in all, I'm unhappy with the end product, and won't buy a second kit. For 'gaming purposes I'll proxy something  else. 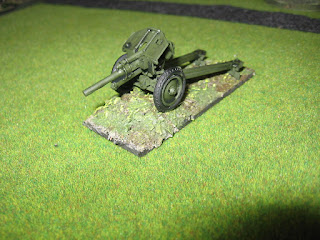 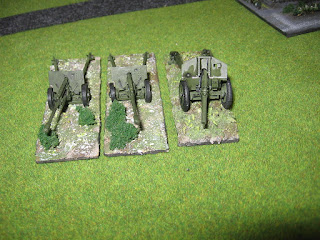 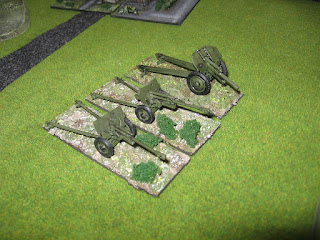 Armies have met and clashed along the Aisne, and stalemate looks to be on the cards. The British and German armies have begun several months of attempts to break the deadlock by trying to outflank each other as they race towards the channel.

This set the scene as Nick G and I met for Nick's first Great War Spearhead game after our diet of WW2 Spearhead. The game was a 'Mutual Encounter' shaped using the scenario generation system, fought with 20mm figures. We used largely 6mm terrain - something a little experimental still.

The first photo illustrates the battlefield looking northwest with the BEF forces trying to race northeast (playing from left to right) to take the Germans in the flank, and the German army trying to do likewise (playing from right to left).

Both sides had understandably concentrated their forces on the more northerly part of the battlefield, each also trying to include a northern flank match in order to gain some advantage on the other. 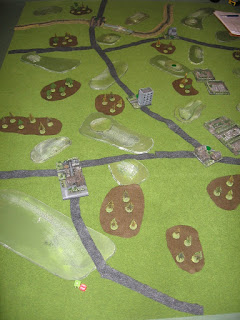 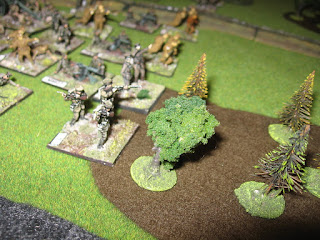 The Fourth Division's First Brigade was pushing forward astride the stream, largely dry in the early autumn heat, its objective the bridge crossing. The German commander took the risky option of a deep flank march, the risk paying off and his regimental commander stormed down the road towards the bridge. For both commanders capturing the bridge was obviously a significant part of the plan. 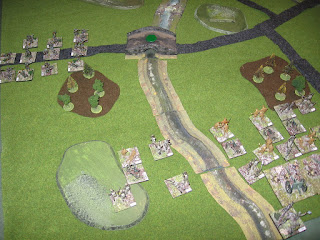 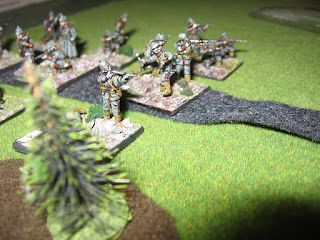 Action quickly unfolded around the copse to the nor'west of the bridge. 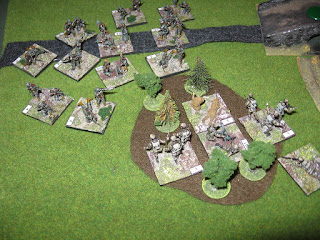 In the meantime the remainder of the German forces paused in their advance as they secured key villages and terrain feature. 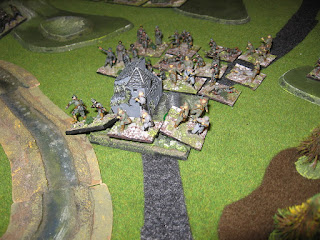 The First Brigade commander called for artillery support and the Divisional 4.5" howitzer regiment responded with heavy accurate fire. The German regiment, caught in the open working its way forward towards the copse, took heavy casualties.


A general view of the northern action from behind the BEF lines. 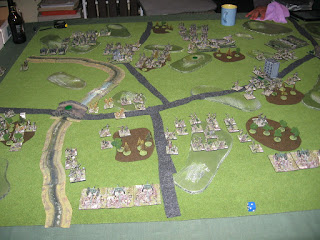 The forward elements of First Brigade had (perhaps rather foolishly) taken up position on the high ground to the west of the bridge, and began to take casualties as accurate German artillery and MG fire came down on them. 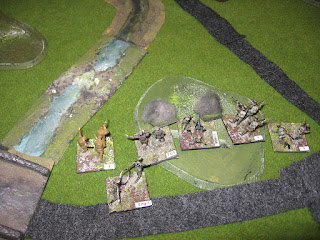 On the southern flank, Fourth Brigade of 5th Division had secured the village and was pushing around the flank of the German attackers.


The BEF commander had attempted his own flanking attack, planed to come on at much the same position as the German Regiment. His Brigade commander struggled to manoeuvre, cramped as he was with an unexpected German Regiment to his front, and finally (3 game turns late) was forced back to his start position, coming on back along the BEF table base line (per the Scenario Generation System). 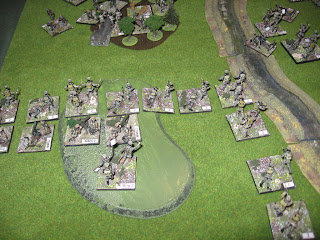 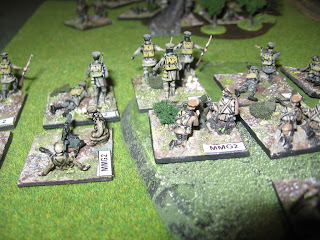 The flanking German Regiment was joined by a company of Divisional cavalry who quickly dismounted ready to join in the struggle for the copse. 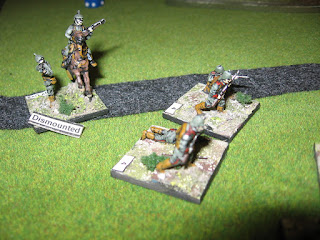 Artillery fire came down on the BEF reinforcements as they pushed on forward to try to dislodge the German Regiment on the flank. 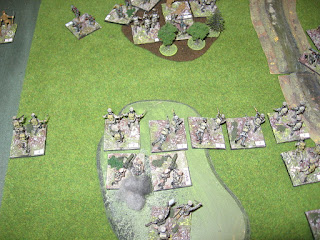 At this stage we had been playing (and talking) for three hours (obviously far tooo much talking and not enough playing) and had to call time on the game. The battle still had plenty of opportunity for one side or the other to gain advantage.

Nick had proven himself a quick learner, taking the Spearhead basics that he has acquired from our WW2 games, and adapting well to the WW1 from of the game. His plan was sound, with a judicious piece of daring, and he had supported each key piece of his attack with appropriate Divisional assets.

He was impressed with the different feel to the game. For my part it was good to push the WW1 plastic around the table again. I've forgotten a lot!!!

It's been a while since Adrian and I played a game. The decision to  a last minute affair, we decided to try out Adrian's newly completed and as yet unblooded 1850s Bavarians. We fought a game based loosely on a small part of the battle of Solferino, 1859. I didn't record it as an AAR. This is simply a chance to show off some of Adrian's newest 15mm figures. 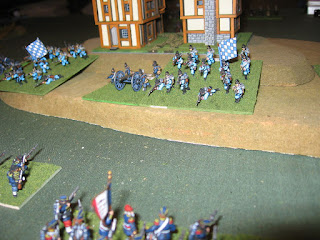 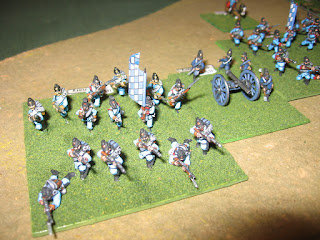 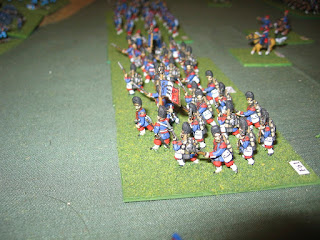 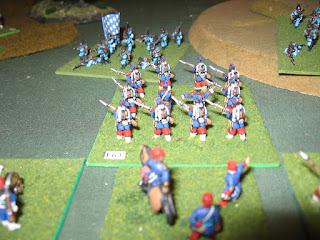 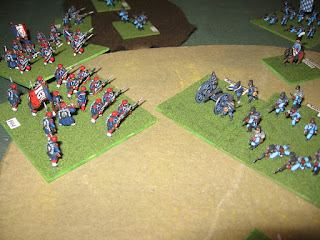 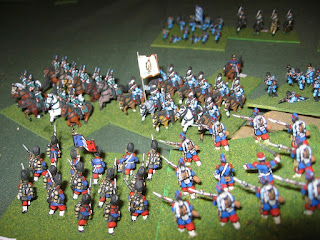 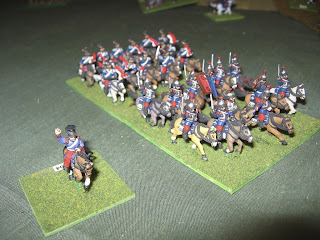