The Battle of Neufchateau August 1914

The Battle of Neufchateau saw the French 5th Colonial Brigade run headlong into the German XVIII Corp consisting of the 11th and 12th Divisions. This game was fought using the Great War Spearhead II rules, and the scenario comes form 'Marching to War', the first scenario book written to accompany the rules. It was fought between Andrew, Jon and myself using 6mm figures (mostly from the Irregular miniatures range).

The German Corps commander expected little or no resistance and planned to push hard through the open terrain towards the village of Cousteumont with the 11th Division. The 12th division was to probe carefully into the wooded valleys on his right, guarding the flank of the division.

The commander of the French Colonial division's 5th Brigade was pushing forward, unsure of what to expect as reconnaissance had revealed little of German intentions. He believed that the most likely route for any German force was through the more open terrain towards the village of Cousteumont, but he was cautious of the wooded valleys. 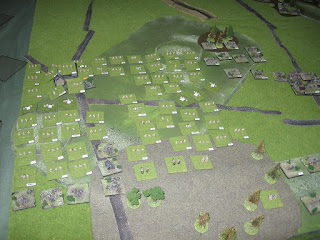 The opposing forces had spotted each other and action was joined. The French commander has a regiment of the famous 'soixante neuf' deployed holding the centre of his line, and these began causing casualties on the advancing German infantry 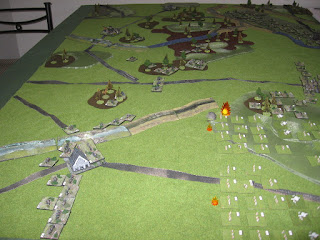 The German infantry on the German left halted in preparation for the ensuing fire fight, awaiting then support of their artillery regiment, rapidly deploying behind their front line. In the meantime the supporting HMG companies began to bring effective fire down on the defending French. 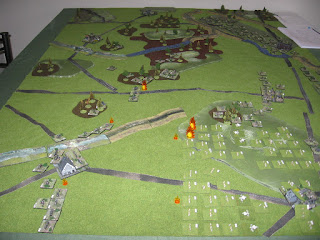 The firefight on the German left grew in ferocity. 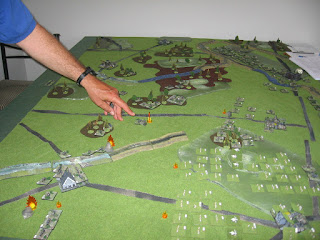 The German commander ordered one of the 12th Division regiments on his right wing across the river to apply pressure on the French left through the woods. 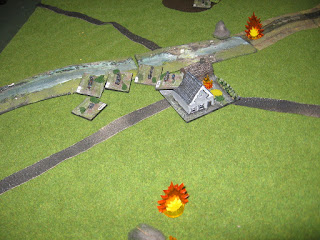 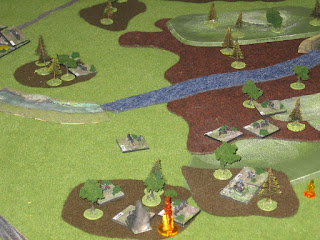 The German left has now pushed forward. The gun lines of its supporting artillery are now revealed as the infantry waiting in front of them have pushed on. These guns were vital to winning the firefight that has allowed them to push the French away from Cousteumont. 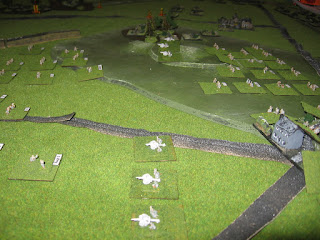 Fire continues across the battlefield, but the pressure has now become almost irresistible for the French Brigade 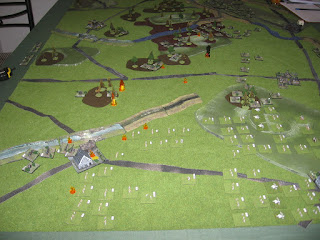 Finally the remnants of the veteran French regiment pull back from the battlefield, leaving the way open for the german division to push on. 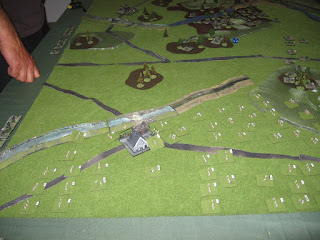 The fighting in the centre takes on an even nastier complexion as two German companies rush in to melee with a suppressed French company. 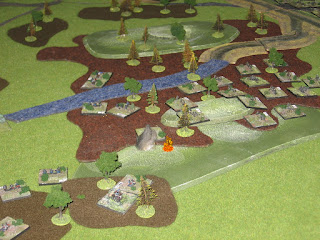 Outflanked, and under growing pressure from its own front, the French left wing regiment will need to retire.

The German pressure has been irresistible, as it was historically. The French 5th Colonial Brigade has fought valiantly, but as occurred in 1914 this was not to be their day. That would come.

We chose to refight the historical action rather than take the scenario book option of fielding a complete French division. This meant that the French commander was defending with two regiments rather than an entire division. The game was however exciting, a lot of fun. And that's what we want in our games.

I did however set up the game and not participate in the planning. Andrew and Jon did not know which battle they were refighting and so neither was aware of the strength of the other, the morale status, nor the victory points conditions of the other when drawing their plans. I simply commanded the German 11th (left wing) Division once Jon had drawn the command arrows.
at January 02, 2016 4 comments: Links to this post 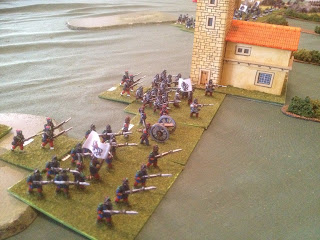 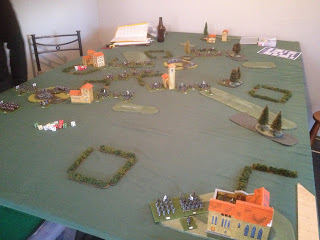 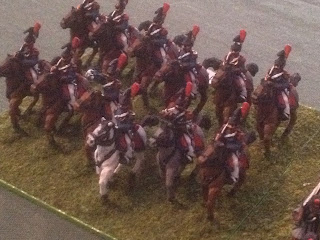 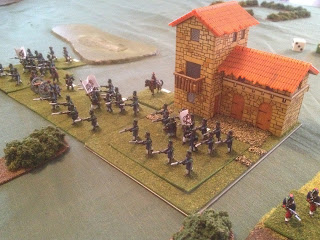 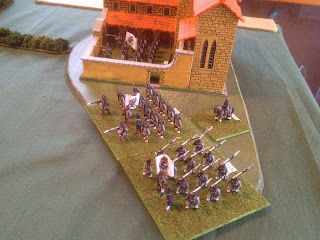 
There are another three regiments (plus some cavalry) to go. I'm hoping to have these ready for the forthcoming eastern front scenario book that Shawn and Robert hope to have out soon. Of course I think I may need some Austro-Hungarians, and some Turks, to match up against these guys in addition the Germans already completed.
at December 29, 2015 1 comment: Links to this post