"The Gathering of the Lost"

I wrote a short while ago about the origins of our fantasy wargames in the fantasy fiction  genre, describing 'The Heir of Night' by local Christchurch author Helen Lowe. Helen's book 'The Heir of Night' was the first in a four part series set in a fantastical world of her creation, and in May the second part of that story, 'The Gathering of the Lost', came out. 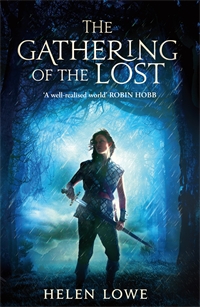 The front cover of my copy has a round grey and black sticker on it that says 'A richly told tale' - Robin Hobb , and frankly you'd have to go far to find truer words. In the first book, Helen created an original and believable fantasy world (I hope that's not a contradiction in terms), an engaging world filled with action and magic. In this second book she pushes our 'world view' out from the original scenes of the first book set initially on the 'Shield wall of Night' and the 'Keep if Winds' , into a world that is more than strongly medieval in nature, a world of knights and tournaments, of cavalry charges and lances. This is a world filled with action, magic, intrigue and betrayal. It is a story of a complex world, a story that demands attention yet is easy to read, a story that is fantastical yet 'plausible'. It may even be a world that those of us with a 'gamer's imagination might just wish had existed somewhere so that there was an historical basis for our games.

From the 'gamer's perspective, this book could firmly support the world created by Mantic Games with their 'Kings of War' rules, or Games Workshop with their 'Warhammer Fantasy Battles' rules set. I could easily imagine the battle at The Leas unfolding on a tabletop with HotT Human figures battling Werewolves.

I had the pleasure of meeting Helen and sharing coffee with her last month, and I found her to be as engaging and interesting in person as you'd expect when reading her books.

I can only repeat the sentiment I expressed in my first post. Even if, like me, you haven't traditionally been an avid reader of the fantasy genre, these books are well worth reading.

As a footnote, it is worth mentioning that local Christchurch artist and wargamer Peter Fitzpatrick created at least some of the graphics for the novels (including the maps). Good work, Fitz!!
at May 08, 2012 No comments: