Great War Spearhead.. half time in the action

Nick and I are currently playing a Great War Spearhead game set in France 1914, created using the scenario generation system. We had to pause in the game as we ran out of time to finish it in one evening (too much talk, and we are a little rusty with the rules), but here are a couple of photos to keep you interested.

The action is looking a little hot here as one of the attacking German Regiments takes casualties from supporting British 4.5" Howitzers early in the game... but were the BEF battalions able to maintain the edge? (The figures in this post were painted a long time ago.. can you tell?) 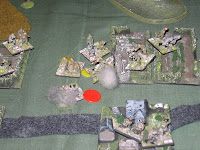 The British artillery are right there, deployed here behind the Divisional HQ in support of the fighting Brigades. 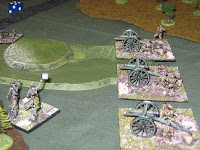 As we had to call time for the evening (at the end of a move) Nick announced a flank march, but wouldn't tell me which flank these troops will be assaulting... the suspense will be the end of me!!!
And you will just have to wait until next week to see the final battle report, coming to you on 'The Great Adventure'.
at February 06, 2010 3 comments: