Last week saw two evenings of 'gaming, a sure sign that the end of year work load is tapering.

The first was a Boer War engagement (well, we fought two actually) using a variation of Chadwick's VnB rules as devised by Adrian. The rules variations revolved around representation of the Boers as sharp shooting skirmish stands. These photos are of Adrian's 15mm Boer War figures. 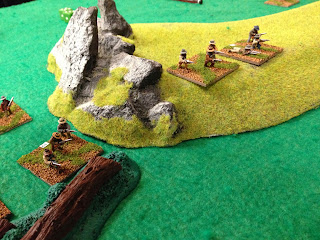 The second game was a 6mm Napoleonic game set in 1815, fought as keith's place. The Prussians were Keith's, the French were Jon's.

No attempts at AARs, just a few photos... proof that I really do actually play these games?? Yeah nah!! Actually I hate that current speech affectation, but you get the idea!!
at November 24, 2013 No comments: