Fleshing out the Firefight rules tests.

Another go at Firefight, the skirmish level sci fi game from mantic (and their answer to GW's 40K game). This time we upped the size to 1500 points, and added in a vehicle, some walkers, a flyer, and the use of orders to see how the game played.

Andy took the Marauders, and I took the GCPS. The mission was 'Violent encounter'. VPs are accumulated for each 5% of the enemy's strength destroyed.

This unit had been nominated under secondary objectives as a 'meat shield'. This meant that their loss did not give VPs to the enemy. 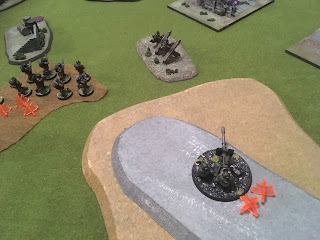 At this stage we realise that the special ability of each side's commander meant that units within 12" can't be Grounded. However both sides have several units grounded at this stage, unable to shake off sufficient suppressions. This proves to be crippling for both sides. The Marauders however still have a unit of Goran auxiliaries, and several units of Goblin snipers very much intact and able to take the initiative on the battlefield.

Secondary objectives included the Marauders gaining 3 VP if their commander is alive at the end of the game. For the GCPS 1 VP was gained for each time an order was rolled for and the number of successes exceeded the number required.

The Marauders were ahead by 1 VP.. a minor victory, and so GCPS pulled back for the night.

I was surprised at how quickly units became grounded. We tended to stick to the terrain, and so I was also surprised at how little manoeuvre there was as a result. It may of course be because we haven't mastered the nuances of the rules yet.