For Brigadier Sommerville life had been one case of bad luck after another. Thank goodness for the inheritance, otherwise he'd have been the oldest Captain in the regiment. Still, with family money, and the sponsorship of the highly esteemed Major General Caruthers, life had looked up with recent opportunities. A shame about those levantine swine spoiling the party though. The cheek of it, bringing flyers to the show; a little like taking a gun to a knife fight.

Breaking the news to the General about his favourite Winstanley had been hard, and to have seen the wonderful Doctor go down beneath a tumult of Turks was no fun either. However things were looking up with the late arrival of Lord Chelting and his wonderful flying machine. He now felt an air of confidence as reports came in of a Turkish horde approaching the encampment.

So his first order had been to Lord Chelting - push forward on the right. "Take the fight to those damned Turks" he'd said. Lord Chelting had raised the corner of his right eyebrow, sucked in a breath through his teeth, and gone to object, but clearly thought better of it in front of subordinates.

Sommerville had struggled to hide his surprise when the Turkish hero had come right out and attacked Lord Chelting. Damnednably unsporting. 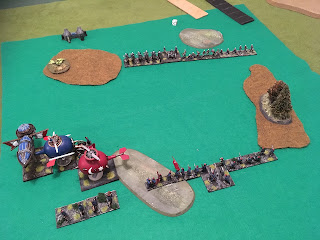 The Turkish hero bounced off, and Chelting ordered the airboat around to support him. 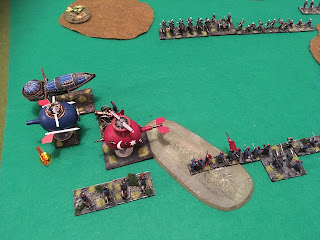 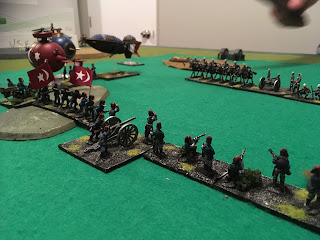 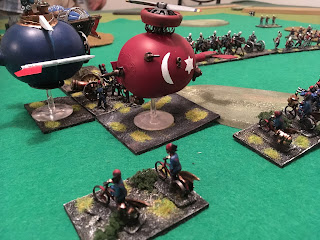 The Turkish general called in additional support from his other flyer, and a unit of cyclist riders, and ... 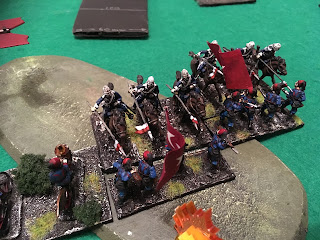 The other Turkish flyer attacked the British airboat.. an optimistic attack in the spirit of self sacrifice, trying to keep the airboat off the blade. 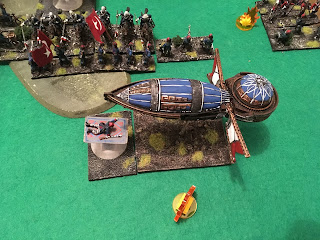 Caruthers lay the second despatch down on the table next to the now empty coffee cup and lowered his head into his left hand. He squeezed his thumb and forefinger across his eyes and pinched the bridge of his nose. The brandy hadn't helped. He looked up into the faces of his waiting officers, their looks expectant and as yet unknowing.

"This looks grim, gentlemen" he whispered, his hand instinctively reaching for the brandy glass. "We have another fight on our hands."