We don't get to play Great War Spearhead games very often. This week was an exception, with four of us coming together to fight the historical scenario 'Action around Mallwischken' from the 'All fine men' scenario book published by Shawn Taylor and Robert Dunlop.


However at this stage, the 3rd German regiment is forced to take two consecutive morale checks (it's casualties took it past the 50% and 66% marks all in the one turn), passes the first but fails the second.

While the German reserve had been committed to shore up the left/centre, the attack had clearly run out of puff. Withdrawal is the only option.

So, clearly Keith and I (commanding the Germans) had forgotten how to 'attack' in GWSH. I have to take the responsibility for that, having drawn our attack arrows too long, too far. This drove the attacking regiments onto the Russian defences, and the casualties were basically catastrophic. I know that I was cursed with poor die trolling with the attack on the right, but that is hardly a 'get out of jail' excuse. The attack was poorly planned.

But what a great game. We had forgotten that the simpler range of weapons systems inWW1 games means that games play faster than their WW2 and Modern equivalents. The game was played with my 6mm forces, all modelled using figures and guns from the Irregular Miniatures range.

We don't get to play Great War Spearhead games very often. This week was an exception, with four of us coming together to fight the hist... 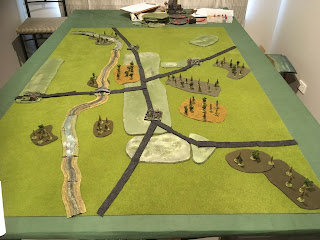