Carruthers at your service Ma'am!!

Nick Grant and I have talked for quite some time about playing a Big Battle HotT game. We both have a British VSF army, and an army of the Undead, so the plan was to fight a double sized game with the two VSF armies arrayed against the forces of the Undead.

Who was sought out to command the forces of the British Army but Major General Carruthers, encouraged out obscurity and the clutches of numerous 'Mayfair Ladies' by offers which included a bin load of cash (and the chance to redeem his honour - after all only the previous evening one of those ladies had offered her honour, and he had honoured her offer, so all night long it was .... but that's a different story ..).

So Carruthers lead his forces, a vast array with a great aerial armada deployed on his left, and clanking steam powered behemoths scatterd amongst the troops. 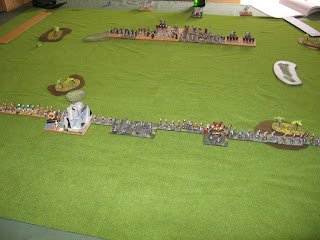 Carruthers began by sending the aerial forces on his left to attack the right flank of the Undead.  The airboat accompanied by two smaller flyers lead out. 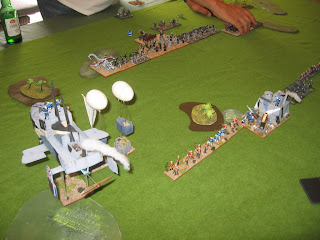 After much 'argy bargy' and general pushing and shoving (something decidedly un-British) the aerial battle had been pretty much won by the Undead dragon that had swooped out of the skies, leaving the entire British aviation service a series of wrecks littering the ground. Meantime a hideous UNdead God had appeard on the Undead left flank, but had apparently not liked the look of the British forces facing the remainder of the Undead hordes, and had frankly decided to leave them to it!! 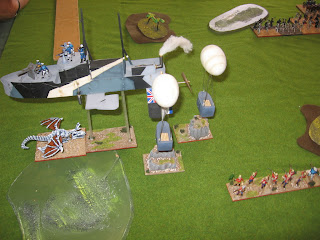 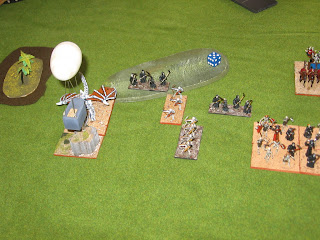 The British left would have to be held by the British riflemen supported by the fiendish scientific magician and his Zap gun, and a clanking steam tank. 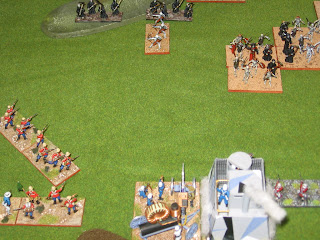 Carruthers pushed his right wing forward, expecting his riflemen, supported by groups of bayonet wielding Welshmen issuing blood curdling screams, his massed artillery, and a clanking robot, to win the day for him. 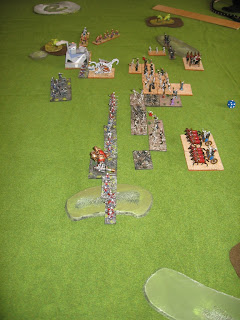 In the middle they were confronted by hordes of skeletons and spiders.. uurrrggghhhhhh!!!!

But these were stout men!! 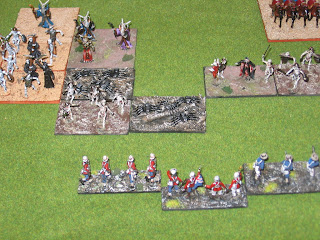 The cursed dragon, fresh from its victories over the British aerial flotilla, soared over the heads of the British troops, but was brought down by a devastating salvo from the mad scientifist and his fiendish Zap gun!! 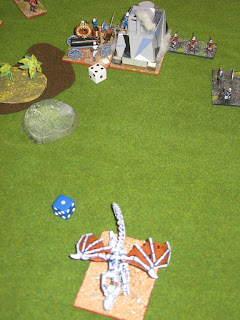 Meanwhile the Undead chariots advanced on the Undead left, but the British riflemen were waiting, shooting the chariots and their ghostly masters away!! 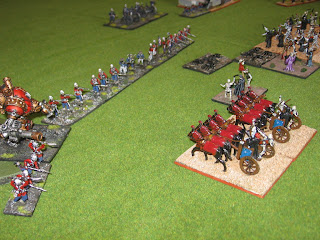 This demoralised the Undead left flank.

The Undead hero finally advanced on the Undead right, supported by his Grim Reaper minions, carving their way through the British riflemen, and demoralising the British left, so the score was even again!!!! 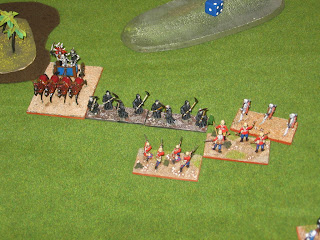 The Welshmen continued their relentless advance ... the sounds of sharpening steels scraping on bayonets could clearly be heard across the din of the battlefield (actually the clink of coffee cups, and slurping of Christmas mince pies, but you get the idea!!!!). 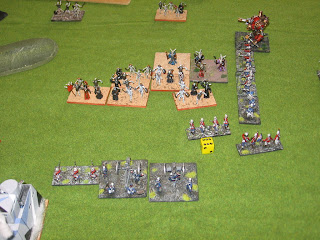 Back at the Undead Stronghold magicians were furiously trying to raise more Undead hordes to take to the battlefield. 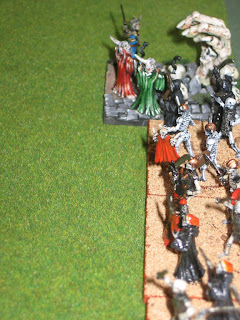 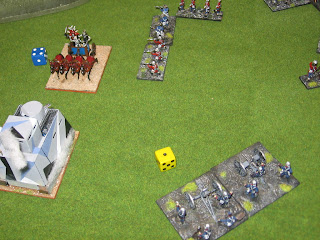 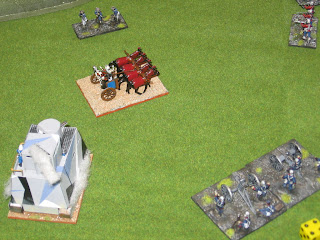 Finally however the Undead hero fell beneath the hail of fire, as the terrifying Welshmen issued forth their blood curdling battle cry, plunging bayonets into the  ghostly skeletal forms of Undead magicians desperately trying to cast hideous spells of curruscating energy upon the daemon-like Welshmen!! 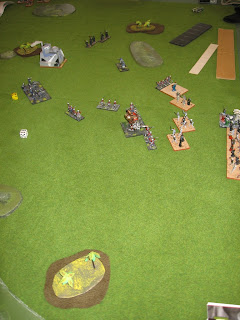 Finally the Undead minions fled the battlefield. Carruthers sat down amongts the piles of bones, pondering the good broth that his army cooks would brew this day from the battlefield spoils, dreaming of  honours and wealth untold, and a life of influence amongst the 'Mayfair Ladies'. His name would once more be spoken with awe and respect in Horse Guards!!

I'd have to say that doubling the size of the game, and playing on a 6'x4' table (bigger than we should have, according to the rules) made this a very different game from the traditional HotT games. It would have been even more spectacular had we played the full triple sized (72 army point) game that is Big Battle HotT. The game was thoroughly enjoyable, a great way to fill a holiday afternoon, and we'll be playing games of this size again!!!!!
at December 30, 2010