More Soviet HotT elements off the painting blocks. As I mentioned in the initial post, a HotT Soviet armyshould have Hordes - riflemen from a seemingly inexhaustible population stock (we now know of course that this was far from true, but this IS a fantasy game system!). So six elements of Hordes to start with. 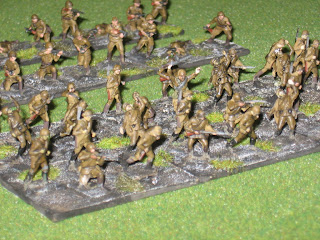 I thought that Soviet hordes should have riflement marching forward, being shot away, but with always more ofm them to come. So I dug out of that miraculously little box of bits all of the marching figures I could find, and also those figures you got with men stumbling forward having been shot.. remember the ones in the Airfix boxes? 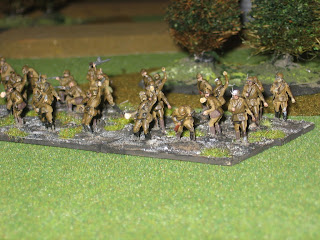 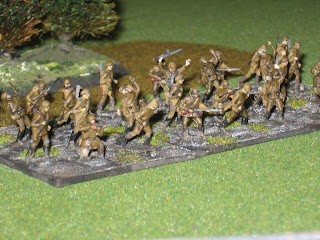 Now I had also planned the next stand to be a Hero, but Stan's advice that a commissar should be a Cleric, and the fact that the central figure here looked stern and Commissar-like, just seemed too much  like a good idea to pass up. The figure was a head swap I did 35 years ago, putting a Soviet helmeted head onto a general figure from those delightful WW1 Germans. What's with the flag? I know Soviet troops didn't go into battle with flags flying, but.. hey! This is HotT.. I can have a flag if I want one!!!! 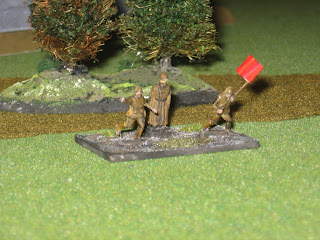 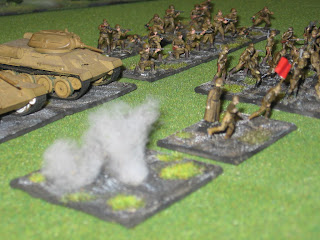 So here is the Soviet HotT army so far:

More than enough to be going on with, with a few choices to make up the 24 army points. 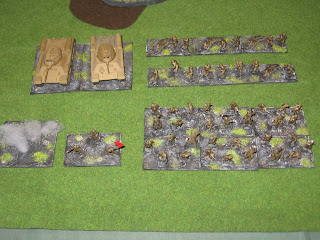 I'll potter with a few more ideas (Stan's suggestion that a sniper would make a Hero is too good to pass up!!). I think this will be relatively easy to push up to a double army for some larger battles; I've got the taste for these larger battles after Carruthers' first foray.
at January 07, 2011