Here is the preliminary Soviet World War 2 HotT army, an exercise in re-using existing figures. The infantry had previously been block painted, so I gave them a couple of coats of the Citadel wash (Badab Black) and based them up.

The composition with these stands is: 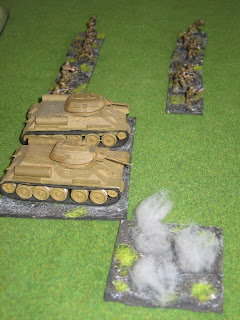 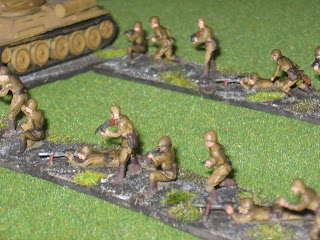 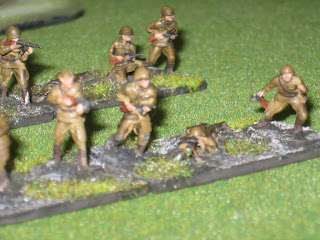 A close-up of the behemoths and the God. The classification of the artillery as a HotT God seemed logical to me. Artillery was mostly controlled at Corps or Army level, and so lacked local command control. It was therefore likely to be hard to get, and as easy to lose (unless being used in the deliberate attack of course, when even then it's use was carefully pre-planned).  This sounds like a HotT God to me. 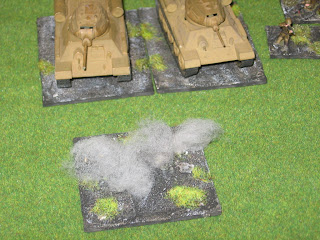 This initial composition is not quite as I'd envisaged the complete army, and I have enough figures to complete some Horde bases (Soviet Riflemen).

However I'd initially seen the T34s as knights, and they will revert to that classification once I can complete enough additional stands to compose the 24 army points required for game play.

I was also on the look out for a Sturmovik, or a Pe2, in 1/144th scale to use as an airboat, and maybe a Yak 5 or two for flyers. A quick foray today to a local model shop hasn't provided anything suitable, so this may be one of those acquisitions that requires  a little patience. The discovery will be all the sweeter!!!
at January 06, 2011