Dwarves and Humans at it again: more 'Kings of War' action.

"Kings of War" game number four, with the forces now scaled to 1550 points as we dug deep into our reserves of figures. The theory: the game gets more and more interesting as you scale the forces towards the suggested 2000 points.

Andy fielded his Humans, while Adrian and I commanded the Dwarves, in a 'Kill' scenario. We agreed to play for twelve turns (six turns each), having previously played games to the other option of a two hour time limit.

Andy deployed with an infantry centre, including five units of archers. We deployed the Dwarves with a solid centre of Ironclad infantry supported by two cannons. We refused the left, holding the flank with an Ironguard Regiment supported by an Organ gun. The right was held by a full regiment of Shieldbreakers supported by an Ironwatch troop, and a Berserkers Half regiment. 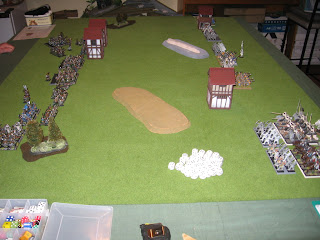 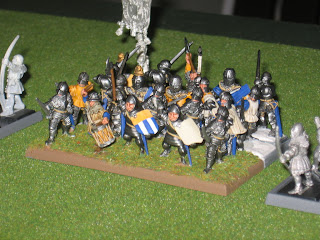 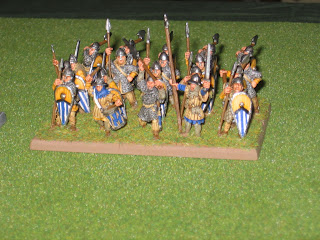 Just one turn of fire on the right flank Ironwatch troop (from two units of Human archers) saw them break and flee from the field. Hmm.. this might be tougher than we thought. 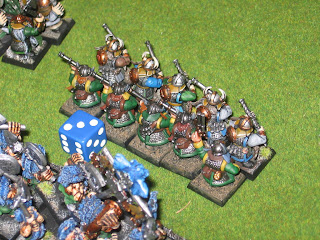 Andy pushed around the flanks with his cavalry. Two units of knights supported by some pistollier light cavalry approached the Dwarf right flank, while ... 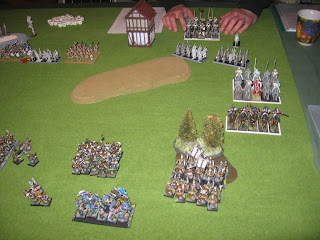 .... a single unit of knights moved to threaten the Dwarf left. 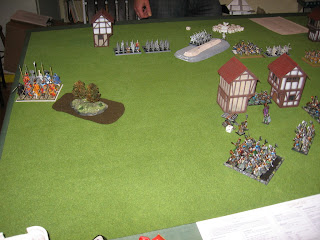 The Dwarven Shieldbreakers holding the right flank moved into the forest on that flank, hopeful that this would make them a bigger bite than the knights could swallow. 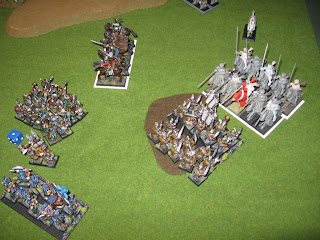 Meanwhile on the Dwarven left the Ironwatch troop fled the field after a very uneven fire fight with two units of Human archers. 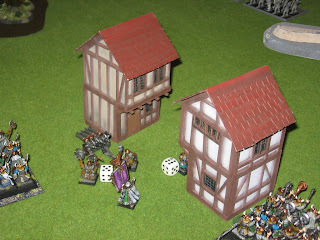 The forest on the Dwarven left was witness to a two turn swirling melee, as axes and lances raised and fell, thrust and parried. Eventually however the accummulated casualties took their toll on Dwarven morale, and the Shieldbreakers 'broke'. 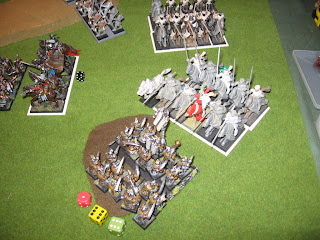 Not to be outdone, the supporting unit of Berserkers charged into the fray and, supported by the Dwarven King,  forced a waver result on the knights. 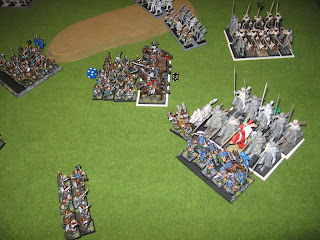 The Human centre was looking shakey, with both units of swordsmen having fled the field after a prolonged bombardment from the Dwarven artillery. The archers no doubt felt just a little exposed as the Dwarf Ironclad regiments now advanced against them. 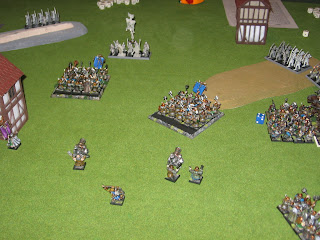 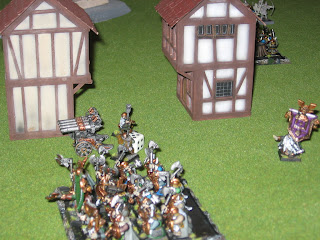 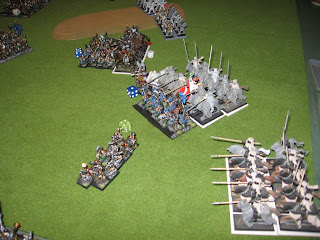 Meanwhile on the Dwarf right, the second unit of knights now entered the fray, attacking the Berserkers in the flank. This definitely was not pretty from the Dwarf side of the table, although for Andy this was one of those glorious moments: 32 attacks on a Dwarf unit with a defence of 3 (less one for the Knights' 'Crushing Strength'. Yep, that hurt!! 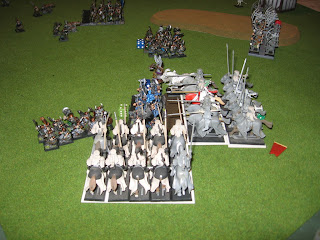 Meanwhile on the Human right, the third unit of knights attacked the Dwarf left flank held by a regiment of Ironguard. It was the last turn of the game, and the knights bounced off, inflicting very few casualties. 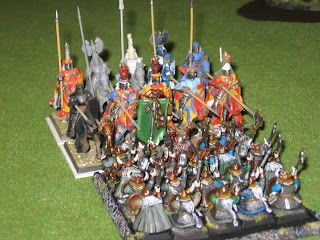 The game ended in a draw. The Dwarfs were in a position to exploit the shattered human centre, while the Humans must have felt that they were onto something here with their knights in a position to hammer the Dwarven flanks. The game continues to be easy to play (although with plenty of tactical challenges). We have the rules pretty much sorted now, so the game mechanics present no real difficulties.

The scale to 1550 points made quite a difference. The additional points allowed for reserves exactly as you would expect.

I'm not sure that we were as keen on the six move turn limit as on the other option of a two hour game window. The battle was hanging in the balance. I'm not suggesting that games should be fought to 'last man standing'. Rather, the game probably needed another couple of player turns each to allow one side or the other to establish its dominance on the battlefield that day.

Of course the rules don't need to be taken as so prescriptive that players MUST abide by the six turn, or two hour, play limit. Regardless, the game was an enormous amount of fun, with it's interesting tactical moments, and its cinematic moments.