So today was it.. my Dwarfs had their first big game of WFB. It was a practice game for the Warclouds doubles tournament in February, with my Dwarfs combining with those of Gabriel against the Dwarf/Empire combo of Darryl and his partner James. As this is my first AAR for a WFB game, I thought I'd write a slightly fuller account than usual.

I took the left opposing the James and the enemy Dwarfs, while Gabriel took the right opposing Daryl's Empire troops. I positioned my warriors and Longbeards in my own centre, with a Cannon holding my left, and an Organ Gun set up to support either unit. To my right was a unit of Thunderers set up to help Gabriel hold the centre, and bring down a fair mass of fire against any troops advancing against us there. 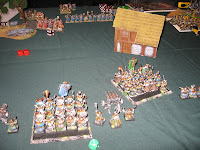 The enemy Dwarfs advanced a unit of Warriors out from their line, and it took a fair volume of fire from the Cannon and the Organ gun in the first turn of its advance. 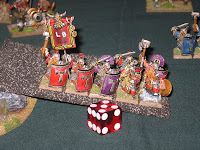 The first turn of fire from the Organ gun saw a 10 rolled for casualties.. OUCH!!!!.. this would make any commander's eyes water. At the same time, fire from the enemy Dwarf Cannon, and a Grudethrower, all managed to inflict no casualties at all.. a series of misfires from the Cannon, and deviations from the GrudgeThrower, all contributed to a dismal performance. I'd have cried if they had been my own war machines. 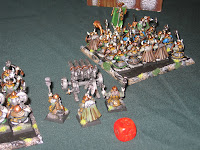 Darryl advanced two units of State Troops with sub units against Gabriel's troops, but my favourite would have to be his unit of Flagellants advancing off their own hill at deployment.. I love the whole concept of these units.. and the figures are great. 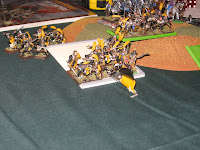 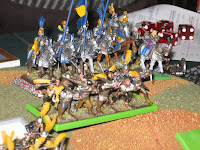 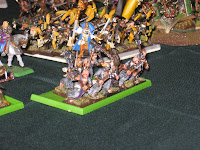 Having reduced the advancing Dwarf warriors advancing against my own centre and left to just a half dozen figures, I advanced my Longbeards out from the line to threaten the flank of Darryl's Empire troops advancing against my Thunderers and Gabriel's line on my own right. The Thunderers had taken several turns of fire from some opposing Quarrellers, but had managed to save every wound... amazing die rolling for me!! 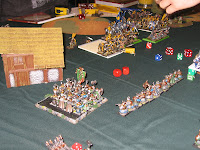 Darryl was however a little quicker and moved a unit of knights to threaten the Longbeards. 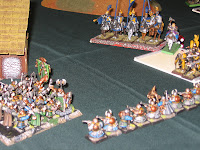 The Flagellants went in .... but lost the combat... I did figure that on the basis of looks and concept alone they deserved to win, but there you go... However they were unbreakable, so the combat continued until all of the Flagellants were eliminated a couple of turns later. 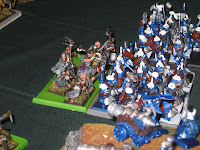 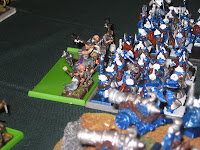 Flanking fire from Gabriel's cannons, and a round of fire from my own Thunderers, reduced the knights to two figures plus a character, and forced a panic test, which they failed.. back they went. 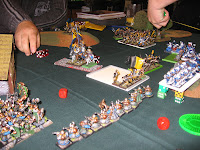 Darryl put his State troops into my Thunderers.. as I'm knew to the game, I wasn't sure what would happen.. thought this might hurt... but he had lost too many troops on the way in ... even so it was close.. whew!! 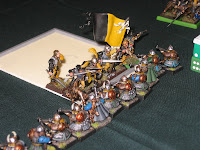 The sub unit of those same State troops went in to Gabriel's two cannon.. 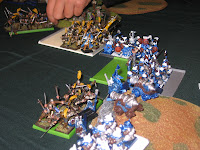 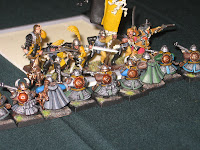 My Warriors finally charged James' unit of advancing Dwarf warriors, and forced them to flee.. we didn't catch them though. 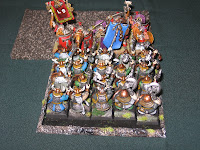 Meanwhile the Longbeards charged the flank of the State troops locked in combat with my Thunderers... On this turn my own Miners managed to charge into James' Dwarf Cannon, having come on the move before on their flank, and then taken some serious casualties from the Cannon firing grapeshot.. ouch.. Dwarf eyes watering about now (mine, that is). 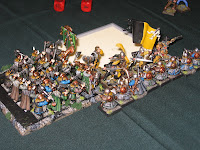 The flank attack did it.. the State troops fled, and were caught. In the meantime Gabriel's own Warriors had been charged by another unit of State troops, but were held to a draw....
And my Miners managed to defeat the opposing Dwarf cannon, but with a Master Engineer in residence, it was going nowhere.. damn!!!
Overall a Dwarf victory, but what an enjoyable game, with my three gaming colleagues (Darryl, Gabriel and James) coaching me along the way.. many thanks to everyone for a good time. I don't think we'll be as lucky next time.
at January 17, 2010