"Yes yes quite so,  Nicholas my boy", and the air whistled from his half blocked nostrils.

"There we were toe to toe with that damned greenskin general in 'is chariot, and some mad maniac orc in the weirdest of flying machines bally well hits us from behind. Dashed poor show I thought. Poor form and all that. Just not British.".

"Yes quite, my boy. Damned tricky chap the mad green skin maniac type. Odd sort to get a handle on. Know just how you feel. Got badly smacked around by one of those odd eastern types in some damned saucer flying machine meself the other month as you'll recall."

"Ah yes, but you still managed to take the day eh wot Sir?"

Caruthers gave a self satisfied smile at the acknowledgement of his own marshal prowess.

"Yes yes. No matter. Those evil types seem to have gone quiet. No follow up after their victory. Rumour has it there's been a falling out between them. Not surprised of course. Old Johnny Green skin ain't likely to get along with anyone for very long eh wot" and the waxed tips of his moustache wiggled up and down with his smirk. He took another swig of his pink gin."Best to get right back on the old horse eh Nicholas my boy? Seems to be a bit of pirate trouble down on the coast. I want you to take a small detachment and sort the blighters out."

"Too right sir" came Nicholas' quick response. "Can't let three breaks in the old arm get in the way eh" and they both laughed and clinked their gin glasses together in toast.

So Nick and I set down the makings of a standard 24 point HotT game with British VSF versus Pirates.


The pirates lined up, with some drunken hordes making for the cover on their left, and their mystical airboat sailing off around their right. 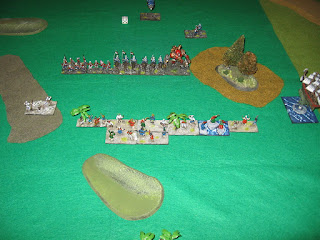 Then the lines hit, and the clash of stolen naval steel against bayonets is heard to ring out across the island. 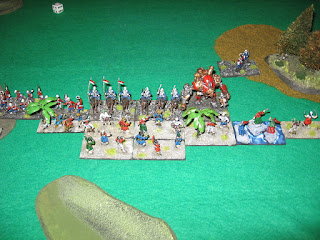 The airboat finds a fair wind finally and swoops in behind the British line. The lancers are pushed back onto the airboat and are eliminated. 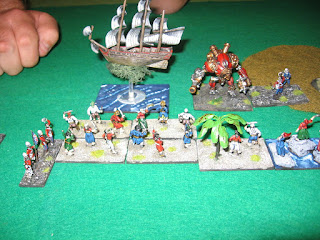 Young Lieutenant Winstanly, famed British hero and Johnny on the spot hits the airboat, supported by one of the British flyers. 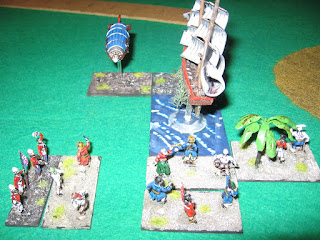 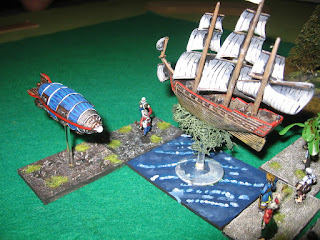 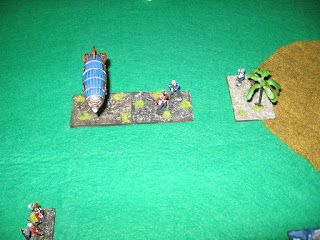 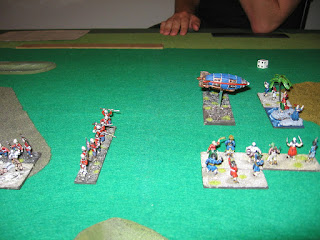 The pirate warband are eliminated by good old British steel 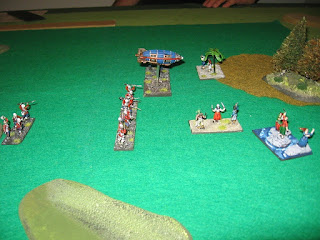 And the day goes to Brigadier Nicholas, his honour restored.

This was one of those games that hung in the balance, able to go either way. Nick's clever use of Winstanley his hero did the damage, eliminating the airboat in particular, allowing his blade to carve their way through the pirate warband.

What a great game...

Brigadier Nicholas will take his thrice broken arm and make a grand report back to Caruthers about his great victory.
at January 08, 2017