" 'ere Corp, wot's 'is Lordship up to? 'e's got us crammed in 'ere like bloomin' sardines, 'e 'as."
"It's called concentration, me old china."
"Well this bleedin' concentration's gonna 'ang us out to bloomin' dry, I tells yer. Bloody Jerry's sniffin' 'round already wiv 'is bloody aircraft, 'an I reckon we've got hole in the line you could drive a whole bloomin' fleet o' London buses through."
"Nah, we'll be right me ol' mate. Sarge was talking to his mate over in D Company, in 3 Battalion..."
"That bloody bastard Bateman? The Sergeant they call the Bus fare Bateman - dishes out charges like they was bus tickets?"
"Yeah, that's the one. Anyway Sarge was sayin' that he told him that the whole battalion is primed to counterattack as Jerry sweeps past. Meantime we've gotta keep these bloody bridges from falling into Jerry's hands."
"An' who the 'ell is gonna pay for that? We is, we's the muggins wot's gonna do the dirty work, we's the muggins wot's gonna be stuka'd to 'ell, we's the muggins wot's gonna 'ave bloody Jerry panzers drivin' right over the top of us... Bloody officers, bastards, every one of 'em."

The regiment had deployed in a concentrated formation to guard the bridges. The German advance had be blunted, and the river and its bridges were vital to protect toe flank of the division deployed further east. 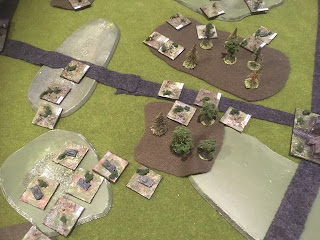 Overall, a fantastic game in which my 'creative' British plan saw me completely 'wrong footed' and outmanoeuvred. The British heavy artillery responded well, but the 25pdr batteries were noticeable for their lack of response. Attempts at order changes to respond to opportunity on the German flank were singularly unsuccessful, even though the regimental commander was positioned with 2 Battalion in order to facilitate the order change that I had anticipated I might want (my order change rolls were 1, 1 and 2, over three turns).

However, those comments are not meant as 'excuses'. I was out thought and outplayed by Keith in another outstanding game. Even my allocations of support weapons was misplaced. However that all encapsulates so much of what I ,love about Spearhead.. it is a fantastic exercise in using resources, space and time. My allocations of resources, and planning of the use of space and time, were less than optimal in the face of an outstanding plan form Keith ... LOVE it.

The game was played using the Spearhead rules system, and Keith's Scenario Generation System. Our armies are composed of Heroics and Ros figures and vehicles,
at January 26, 2019