It only takes a little casual observation of war gamers to see that there are as many views on what constitutes good rules and good games as there are 'gamers. In my nearly 40 years of gaming I've seen some interesting opinions (and some even more interesting people expressing those opinions).
One of the more interesting is the view that historical games are real games, while anything else (dare I say ..F..F..F.. Fantasy) is not real war gaming at all. Games other than historical ones are even looked down on with disdain, an opinion equally applied to the games and the gamers who play them. Kids, for example,  should be discouraged from playing the 'F' games, since they aren't real war games.
I think that's interesting. A little voice in my head (yes I have one of those) says "and the games the historical gamers play aren't fantasy?" You see, to me all games are good games. They all have the same benefits, especially for younger players, but for all of us really:
Now for my money that's not a bad start, and it's true regardless of whether you are creating armies of Orcs, Spanish infantry for the Peninsular, Russian infantry for the eastern front 1914, or Chieftains for a little rumble in cold war Europe.
And let me explain an earlier comment as well: to suggest that there is something inherently superior about 'historical' games is perhaps a little misguided. I reckon that all of our games are essentially fantasy: few of us have ever had to face the terror of combat. We don't know what it is to defecate in our trousers from the gut wrenching fear that post combat interviews suggest is experienced by so many men prior to, or during, combat.  By the way, take a look here for a discussion of Marshall's post combat interviews with infantry. Were they real?
So what's my point? All gaming is good gaming. In common with all other gamers, I have my favourite rules, and those rules sets I abhor. For example, for me Flames of War does no more to simulate WW2 combat than tiddlywinks. The Spearhead family of rules (yes, one of my favourites) far more effectively represents the types of command decisions that commanders faced. So I choose to play Spearhead rather than Flames of War. BUT... FOW is just as valid a game as any other. If people like to play it, then that's their choice. This doesn't impact on my choice to play the rules sets I enjoy. And FOW players have a good time, which is what it's all about.
Either way, that's about as real as I want my war games to be.
at December 22, 2007 No comments:

Quality is different things to different people. When I worked in the tourism industry we defined quality as 'exceeding customer expectations'. With my work over the past few years building world war 1 armies in particular, I have had a number of experiences that fit this description, and I wanted to share these here. Many people often regret things they have said, but too often in life we actually regret things we have not said. Here's my chance in the hobby world (hopefully not my last though).
Here's an example. I decided to build an ANZAC division for Great War Spearhead using the HaT ANZACs (wonderful figures.. and there's another example of quality). I needed some MMG crew, but the HaT figures came with no heavy weapons at all. I wrote to Ian Kay at Irregular, having found that their 20mm WW1 range seemed to be the most compatible with the HaT plastics. There are no ANZAC MMGs in their range, so Ian proceeded to sculpt some new heads for his WW1 Brit range: the result is here below. I thought this was stunning service, and a measure of quality. 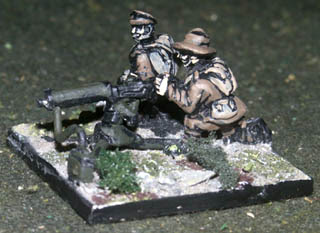 While on the subject of Irregular, I decided on good advice to use the Irregular range to build my new 6mm GWSH armies. When the figures first arrived I was pretty disappointed. But judicious use of dry-brushing revealed a lot of pretty useful detail. They're not too bad.
Then, talking about service again, I regularly use Spirit Games for my Heroics and Ros 6mm figures. Phil at Spirit Games is pretty amazing: orders from Phil are almost always in my hands within 7 working days (and on the one occasion when they weren't, I had an e-mail explaining why).
Both of these suppliers have, in my book, a record of outstanding service... that's quality for my money.
Now I'm not trying to suggest that these are the only suppliers of quality in the wargames world: for example I love the qualty of the miniatures from companies like Essex and Games Workshop. I just wanted to highlight the service from Spirit Games and Irregular as great examples of quality. We need to support suppliers like this, that's our best protection against poor quality service.
at December 17, 2007 1 comment: