Today was the annual Carnage tournament, the second of the two annual Christchurch HotT tournaments, combining a Warhammer Fantasy battles tournament, and of course HotT.

This year a slightly reduced field of six veteran players took to the tables: Mark, Stan, Nick G, Gordon, Kevin and me. The format was simple: with five rounds we each played one game against every other player.. simple!! Having one the tournament twice before, this time I managed a credible third, with a long overdue tournament victory to Nick G.

I played Nick in my third game of the day, and while Nick beat me, it was perhaps the most memorable game of HotT I can recall playing. While I'll post sundry photos of the other games in another post, I thought I'd offer a detailed account of this game. 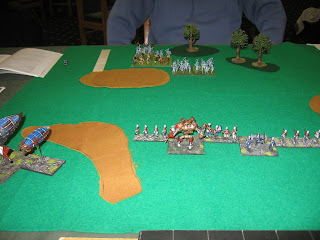 and a host of ghostly hordes.. the dead of Teutobergerwald. It also included a dragon... hmmm.. did i mention the dragon? mumble mumble mumble.... 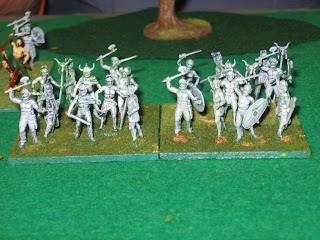 Carruthers had at this stage had a successful campaign so far, having used his recently arrived air wing to good effect to beat off both previous opponents. Confidence in the new technology was high... 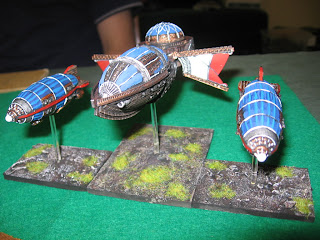 Early in the game the German dragon arrived, and .. in a rush of blood to the head it appears in hindsight, he ordered the air wing into action, with the airboat, supported by two flyers, hurtling towards the dragon pinning it against the base line. 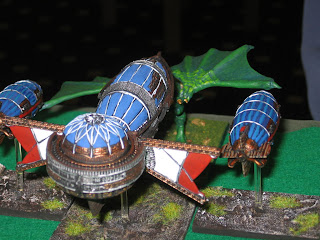 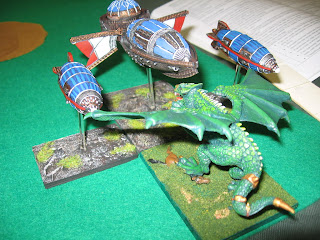 Sadly, Carruthers had indeed over-estimated the combat power of his air wing, as the German dragon breathed vivid red and orange flame at the attackers,  bringing the airboat down in a fiery ball of flame. 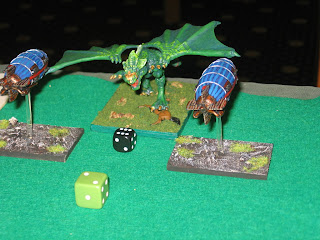 In its next turn the dragon clearly felt that it liked the taste of British air, and took on one of the remaining flyers. 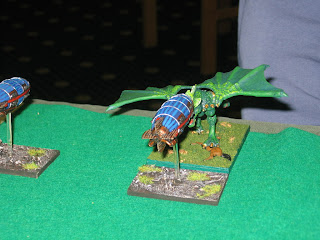 The other flyer fled across the table, but was quickly caught by the dragon. Carruthers was heard to scream some curly language at his advisers... 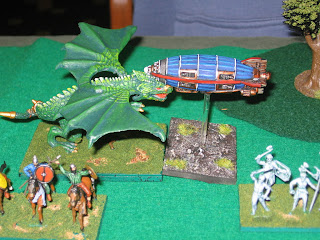 The dragon then decided to take the action to the enemy,  and with a flap of its wings, soared across the sky and settled itself behind the British lines in preparation for its next assault. 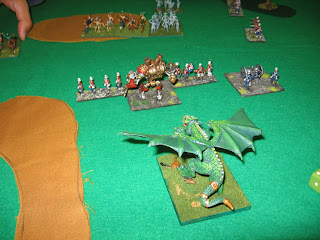 The British shooters had meanwhile swung around the German left flank, and were kept busy dispatching Hordes as they reappeared adjacent to the German stronghold. 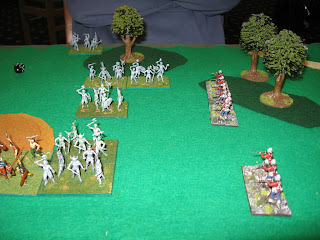 The dragon then began a game of cat and mouse as it tried to attack the British line which included Carruthers himself. Absolutely 'bloody anoyed' at the poor performance of his new flyers, Carruthers himself took the responsibility of dispatching the aerial menace. 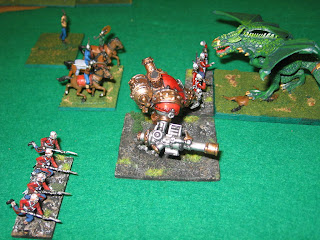 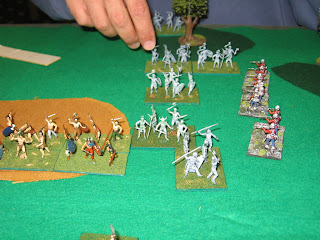 'Nothing beats the cold steel, I tell you... blood, guts and cold steel...' Carruthers' voice was heard echoing across the battlefield as the dragon fled from the onslaught. 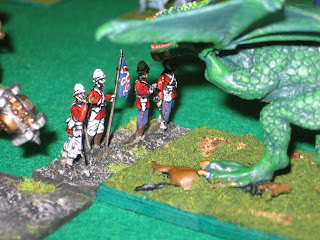 Carruthers then turned and lead his steam robot against the German hero, but the hero was tougher match, and the end was at hand,  Carruthers' army was beginning to dissipate. Carruthers himself was extracted from the battlefield by his loyal staff, filled as they were with admiration for the man who had single handedly dispatched the nemesis of the British air wing. 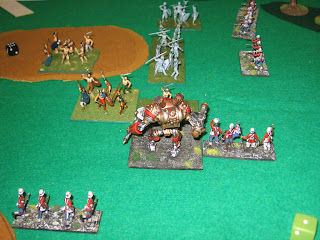 This was an extraordinarily good game which swung one way then the other. Carruthers' victory against the dragon had looked to be a turning point in the battle, but it was not to be.

Despite calls from the King for Dwarf forces to 'show more steel', the Orc invasion of the Dwarf realm has continued unchecked. This time the Dwarfs had even called upon the Kingdom of Men to fight in support of their warriors, but no avail.

This game featured 2000 points of Orcs, and the equivalent in Humans allied to Dwarves, using the Mantic Kings of War rules. This was the largest KoW game we had played to date. 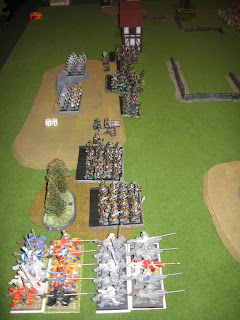 The Orcs deployed.. um, well.... all over the place really. 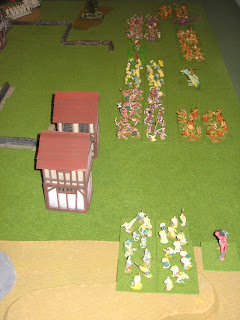 The Humans were given the left, which they held oddly with archers and mounted scouts. In a rush of blood to the head, Andy doubled the archers forward, putting them quickly in charge reach of the Orcs... this wasn't going to end well!! 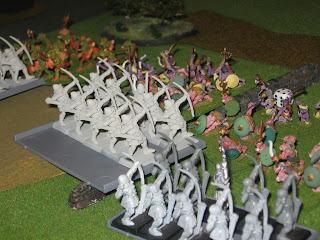 Meanwhile the Orcs came on towards the solid bodies of dwarf warriors holding the centre and the right. 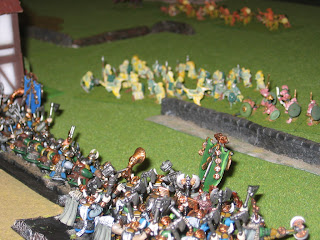 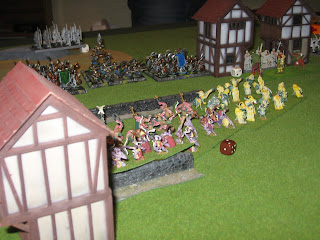 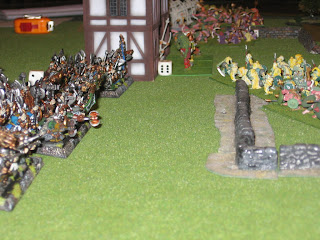 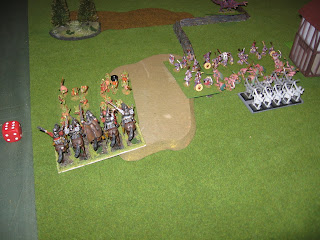 Orcs finally hit the Dwarves in the centre .. 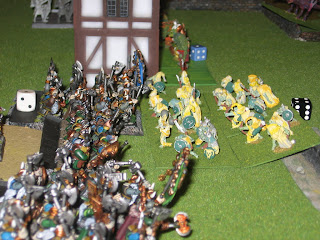 While the Knights hit the Orcs on the Orc left. 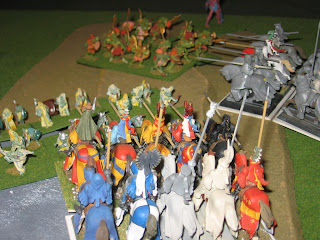 The first unit was routed, but .. 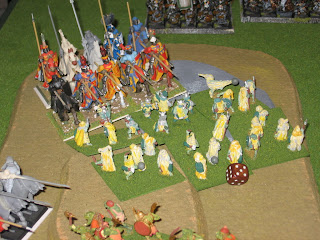 The knights were then counter charged by Orc reserves (what's this with Orcs using tactics??) and routed themselves. 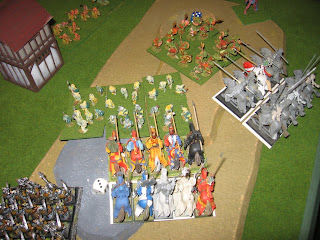 Dwarf warriors had moved to bolster the attack on their right .. 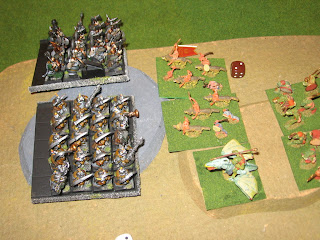 While Orcs bounced off the bodies of Dwarf warriors in the centre ... 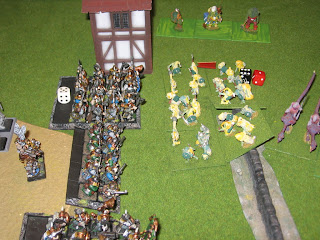 But the Dwarf right was under threat as well.. flanked by some of those Orc heroes... 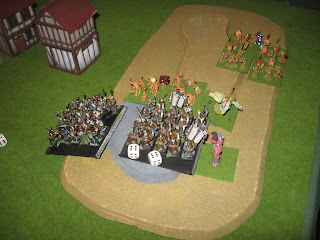 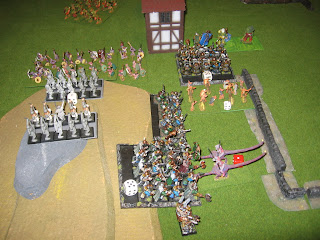 But the writing was on the wall.... the dwarf unit at the top of the picture was hit front and rear... so that one didn't end well either...

Back to the drawing board...