With the new war games room set up and christened with some fun Wings of Glory, it seemed like a good time to get down to some serious business. Keith, Andy, Jim and I managed to get together for a Great War Spearhead game.

The scene is eastern France in the opening days of the war in August 1914. French and German forces are advancing towards each other in some of the more heavily wooded terrain in the region. I wasn't able to replicate any specific terrain from any of the scenario booklets, so set up something like the sorts of terrain shown on the maps, and we pitched a division each of French and Germans against each other, with no Corp supports.

The game was played using 6mm figures, mostly from Irregular Miniatures. The buildings are mostly Hovels 6mm, with some smaller home made buildings representing village sectors


The French plan concentrated on the left. The plan revolved around a central thrust towards the woods that dominated the centre, supported with a single regiment on the right to take the bridge over the river (one of the game objectives). A regiment was to advance on the left and sit as reserve between the regiment taking the village on the French left, and the regiment conducting a flank attack (scheduled to arrive turn 4). The plan anticipated a German hook on this left flank, but continuing towards the village on the French left. This was where the French attack was to come seriously unstuck. 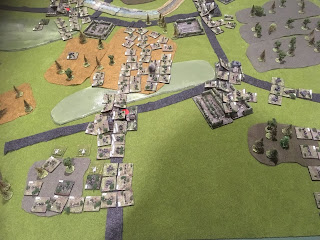 Sadly the reality was much as it was on the table. I resisted posting any historical photos here.


The French advance has been seriously blunted. There is little option but for the French forces to withdraw.

This was our first GWSH game in some time. For Jim it was his first game, a game well fought, a plan well devised. The action in the wood played out very much as one would read in the regimental histories, and the advance across the open ground by the French flank march .. well, what can I say? It certainly reflected the French casualties in those opening weeks of the war.

This all reflects some of the many reasons I like Great War Spearhead so much. The outcomes continue to mirror the evidence one finds in the regimental histories of French and German forces.
at June 30, 2018 1 comment: