Read that as the latin.. it was (and probably still is??) the motto of the RNZA, meaning 'everywhere'.

As 'tankies' we used to translate it as 'all over the ***** place' as a derogatory reference to our brothers in the artillery. It certainly describes my painting focus, with this latest offering.

I ordered some yet to be disclosed (keep watching for what I hope will be a nice addition!!) WW1 figures from Irregular Miniatures, and while doing so thought I'd beef up the stocks of Austro-Hungarian MMGs for the Austrian Division (that long time coming 'Eastern Front 1914' project).

They are not too bad, and certainly feature that distinctive flash eliminator on the barrel that you don't see on other models. 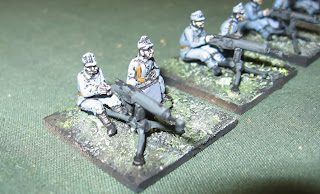 A bit more to go, but hopefully we'll start having some games over this coming summer? Incidentally, of ourselves in the armoured corp we used to say "The Armoured Corp brings class to what otherwise might be an unseemly brawl'.
at November 17, 2013 No comments: