A time of heroes: French napoleonic in HotT

And with a roaring 'boom', the napoleonic HotT army is basically done.. well the fighting core of it, to 72 points. Not wanting to spend too much time painting figures (this was, after all, an exercise in making use of surplus figures otherwise consigned to sit in a box unused), I decided to make double use of the French artillery based for Volley and Bayonet. As they will need to continue to serve in that context, I made a couple of simple sabot bases to give the guns the correct HotT frontage when in use in the HotT environment.


So this is the army basically completed to 72 points. Well, actually there is more than that, dependent on how many columns/behemoths I choose to use. 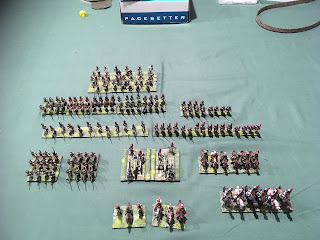 The army doesn't have as may heroes as it may, and I will await the right inspiration to create some napoleonic steam punk type flyers and an airboat. That's all about spotting the right 'thing' to use, or the right opportunity. I have a plan in my mind that involves table tennis balls and mesh to create balloon flyers... we'll see.