I've said it before, and I'll say it again - one of the many strengths of the Volley and Bayonet rules lies with the ability of the rules to play different sub periods within the 1700-1900 period using the same basic mechanisms but with small subtle changes. These changes make a massive difference to the way the game plays. Last night we played a Franco-Prussian War game (actually the historical battle of Frœschwiller).

What is intriguing is that the rules changes seem to capture the feel of these battles that you get when you read the histories, and it is easy to see the origins of the types of battles that occured on the frontiers in 1914. Andy and I commanded the Prussians while Adrian took control of the rench defence. I have to admit that it had been so long since we had played any FP battles that I had forgotten much of the essence of using the Prussians. Consequently our showing on the batlefield was pretty dismal, but the game was a lot of fun.

I had intended to write up an illustrated AAR, but got too involved in the battle to keep a track of the action. So this is more of an opportunity to showcase Adrian's painted 15mm armies again. Just sit back and enjoy... 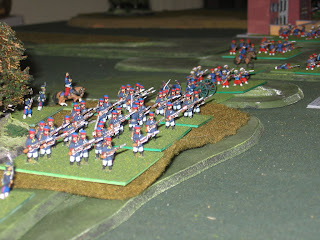 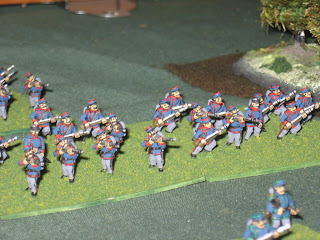 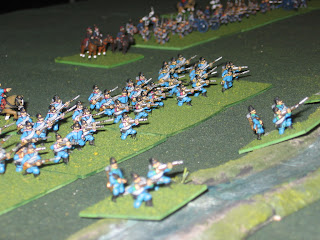 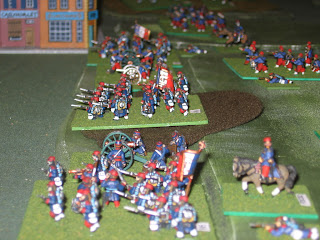 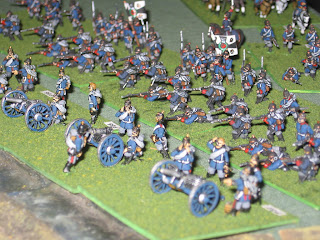 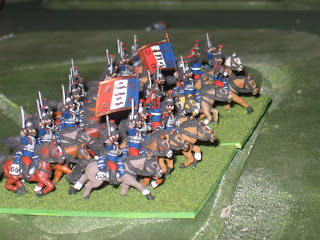 I have always wanted a chariot army, and late last year I ended up buying three, being a sucker for the Essex "3 for the price of 2" deals. What I hadn't factored into the army building equation was the impact of our February 22 earthquakes here in Christchurch. At the time, the first of the three armies (the Minoans) had been based and undercoated, and about half the figures had had flesh painted on them.

The psychological impact of the EQs was interesting to say the least, and I found myself having lost the painting drive I'd had for several decades previously (and I have not been the only one). I guess facing the on-going shakes created levels of stress and anxiety that we would generally prefer to forget (until exactly the moment when the next tremour hits, although we seem to have hit a quiet period finally). And now there is the prospect of waitng to find out if our house will be repaired or demolished.. hmm

As interesting as all that might be, I think I have finally regained the motivation (in no small part due to the recent Timaru TAGCon DBA competition), and tonight I finished the Minoans. Now this is the first army I have painted after I had based the figures. I don't think I'll be doing it again, it has been just too fiddly and awkward, especially with 'close order' figures, in this case the pike.

Here is the result. The Essex pack comes with enough figures for the only army option, a Psiloi or an Auxilia. 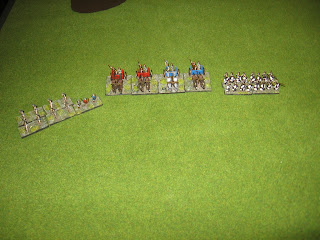 The four heavy chariots, including the general. 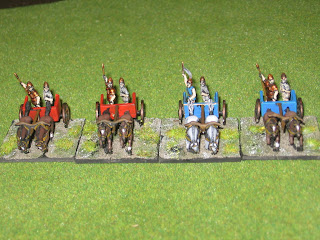 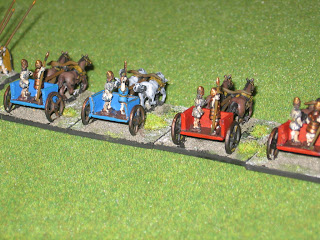 The four bases of pike, with their characteristic 'tower' shields. 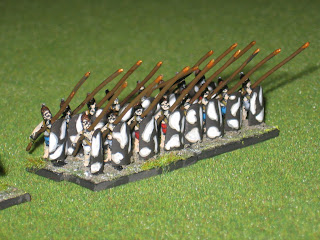 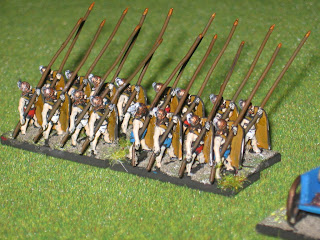 The army list allows four psiloi, or three psiloi and an auxilia. 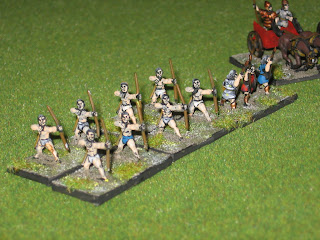 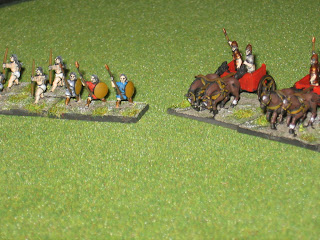 So, what is the next project? There is plenty of unpainted lead and plastic here to choose from  - ranging from Dystopian Wars VSF flyers for the HotT army, to another five DBA armies. There are Dwarves, Sci Fi vehicles, League of Augsberg French, Epic vehicles and infantry. and .. sigh.. just far too many choices.
at August 17, 2011 5 comments:

It is after all the 150th anniversary of the start of the American Civil War, and one could hardly let this go unmarked without playing at least a few ACW games this year. So last Friday night it was, across Keith's table using Jon's 6mm figures, and yet again my all time favourite rules set Volley and Bayonet.

It was a hard fought affair, and one of those games where lady luck seemed to desert the Southern armies at every turn. Mind you, maybe the battle plan wasn't that flash either ('Plan? Plan? We had a plan?').