Somewhere north of Arras, May 1940

We'd already been on the move for too many days without rest. The toll had been significant. The men were tired, marching with shoulders hunched and eyes down, and the path behind us was littered with broken down vehicles unable sustain such distances without more sophisticated mechanical servicing arrangements. Division reports had warned me that aerial reconnaissance indicated significant German armoured forces approaching and we'd had first contact with their advanced reconnaissance forces the evening before. A number of firefights during the evening had given away much of our dispositions, and so I determined that I'd shift my dispositions during the night. Tales of French forces being outmaneuvered as they adopted static defensive positions left me with a determination to take it to Jerry before he could take it to us.


I deployed with both motorised infantry battalions up (Durhams on my left and Gloucesters on my right), keeping 5th RTR in reserve. My intention was to push ahead with my left flanking battalion (the Durhams), aiming to seize high ground ahead of us, ground we'd been unable to reach the evening before. Recognising that my left would be vulnerable I positioned 5th RTR so that it could advance in support of the Durhams.

The terrain on my right was much closer, featuring several high features and significant forested areas. I deployed my other motorised battalion, the Gloucesters, in this area, well equipped with two batteries of AT guns, two platoons of MMGs and our AA battery. These men would need to hold at all costs. There was no other support available to them. 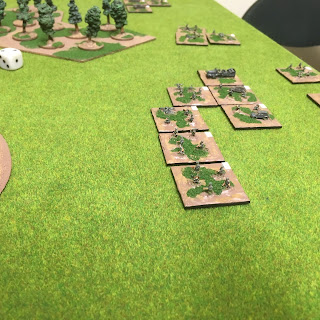 Seeing the Durhams facing what I took to be a major armoured thrust, I committed the 5th RTR almost immediately in their support. Engines roared into life and platoons of A13s and MkVIs moved out. 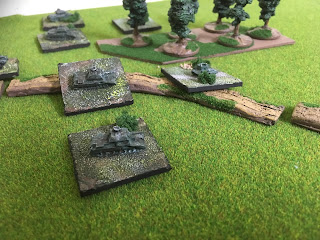 It look very little time before we heard the drone of aircraft engines, and what we came to recognise as the howling scream of Stuka sirens over the heads of the Gloucesters. The bang bang of the Bofors deployed to provide AA cover was easily drowned out by the screaming sirens. The sound chilled the nerves. 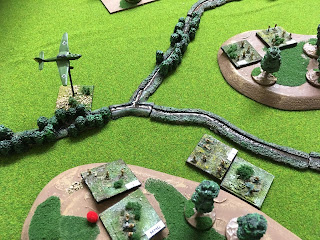 The sound of explosions rent the air.

The Jerry commander had simultaneously deployed his own armoured reserve on his right. The armoured forces were destined for a head on clash.

I resolved that I would not sit idly waiting for the battle to develop. I had to take the initiative from Jerry, so I ordered the Gloucesters on the right to advance and sweep around onto the flank of the German infantry.


The Gloucesters continued to push ahead, moving through a small village as they headed for the small copse on the German flank. 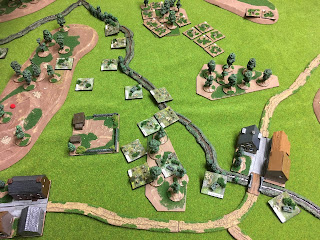 German artillery fire was intensifying. Our own 25pdr batteries were struggling to meet all of the calls for fire support, so intense was the action. Repeated failed efforts to contact the heavy gun battalion we'd been allocated for counter battery work meant the German gunners had free range.

I was advancing in company with the 5th RTR. We came under heavy fire from the German armour, losing vehicles almost immediately.

The Gloucesters had managed to swing around and take the woods on the German left flank. They were now able to bring fire down on the German infantry with relative immunity.


Casualties on 5th RTR meant that I had my work cut out holding the unit and maintaining contact with the German armour. The lads came through, and we continued to exchange shots. The Gloucesters began to force the German infantry back, but this meant they fell back on the heavy weapons support. This would be a tough nut to crack. 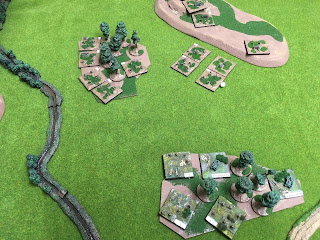 News came through from Division: Jerry had broken through elsewhere. We'd need to break off the action and fall back south of Arras.

This was a game that Keith and I played using our favourite Spearhead rules. The game was set in France in May 1940. We set the game using Keith's Scenario Generation System. At the end of play, points slightly favoured the BEF, but another turn of play would have swung the balance - the Durhams, and the armoured battalion attacking them, were on the verge of a morale check.

A great game which has lead to a fascinating discussion on orders options for the defender.
at August 05, 2017 1 comment: