Some of the comments on my blog in response to the Hun conversions from the old Airfix Hussar figures lead me down memory lane this morning, reminiscing on some of the conversions we did 'back in the day' as they say, and the uses to which we put several versatile figure sets. Necessity is the mother of invention, as they say. Here are some more:


The Airfix Romans were also put to a multitude of uses. These were conversions into Roman Auxilia (Light Heavy infantry in that specific WRG edition).

And this was a combination: the horse, and rider's lower torso/legs, from the ACW cavalry, with a roman legionary torso and head pinned to it, to give Roman light cavalry of the 1st centuryAD. 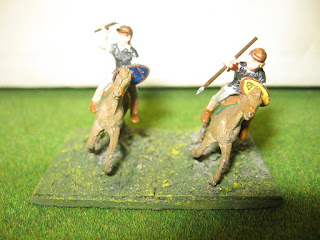 Are we 'ad it tuff in our day - you try tellin' the young people o'today that. They won;'t believe you!!
That said, I think these will all be repurposed and re-used. They were a love affair at the time, and continue to be so despite the beautiful miniatures available on the market today.

If you re of that age, why not share some of your own epic conversions. I'll bet there are some astounding pieces of work out there.
at July 24, 2016 7 comments: