Somewhere north of the Crimean peninsula, and German forces are battling to keep the Russian counter-offensive at bay. Von Manstein has demanded more time to marshall German forces, and the 352nd Regiment has been sent forward to try to delay the Soviet forces. The Regiment has two operational battalions made up to 80% strength with recent reinforcements  but has lost much of its support weapons in the retreat. Army command has allocated two SP companies to help stiffen resistance, and Luftwaffe support if it can be spared. 'Buy me some time' were von Manstein's words.

Meanwhile a Russian tank brigade and motorised infantry battalion have been pushing hard on the heels of retreating forces in the area. An infantry regiment has been allocated to provide additional support as the advance runs out of steam.

The Russian mechanised forces advanced strongly on their right wing, their left pushed forward with the infantry regiment in order to take one of the bridges over the impeding river. 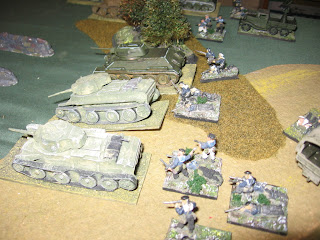 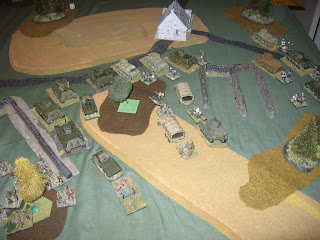 A preliminary bombardment by a battalion of Katyushas clears most forces of the central high ground, all except the artillery observer hidden away. Simultaneously two battalions of Soviet 152mm howitzers hits the high ground to the front of the tank brigade advance. 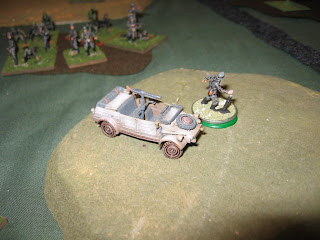 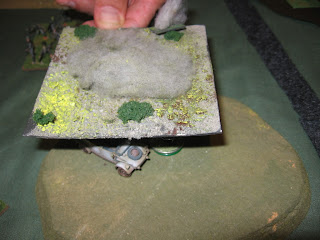 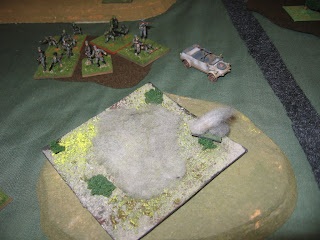 The StuGs are well supported by an infantry battalion. 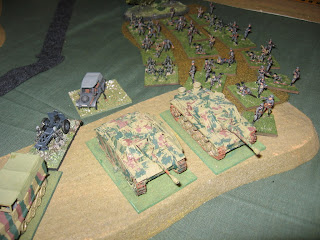 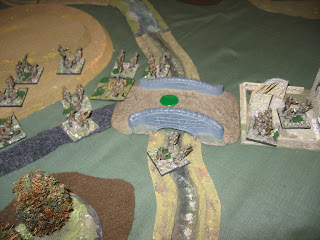 German and Soviet faces look to the sky as the familiar drone of Ju87 dive bombers is heard. The crews of the AA assets look sharp, scanning the skies. 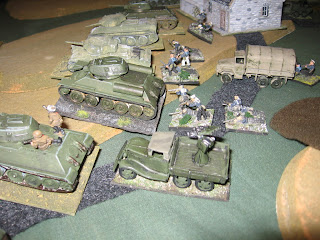 In the meantime the engagement between the Soviet Tank Brigade and the StuGs hots up. One of the StuGs platoons and one of the T34 platoons are each suppressed, but the weight of firepower begins to tell, and the first of the two StuG platoons is destroyed.

The German commander believes that he has achieved his mission. The advancing Soviet forces have been forced to deploy for a full scale attack at the cost of a single platoon of StuGs and some casualties amongst the infantry. It's time to withdraw to the next river line.

I composed the forces for this scenario using the points system from Keith McNelly's scenario generation system, and Nick Grant and I played the game. I scaled down the size of the engagement to make sure that we were able to complete the game in the evening, but in doing so reduced the German force to two manoeuvre units. This was simply too small and so Nick had no reserves and had little with which to beat back the Soviet assault. Next time we'll play a game with the larger forces recommended in the system, allowing ourselves the time to fight the game to a conclusion.
at April 20, 2013 3 comments:

Just finished the first air support element for the 20mm WW2 Spearhead project: a Tamiya Ju87 G-2 Stuka. I think that this may be the first aircraft model I've assembled in over 30 years, and.. yes, I enjoyed it. Interesting how we can so easily forget the simple pleasures of our hobby. 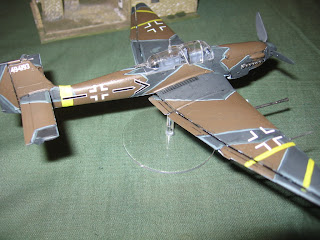 I think my 'black/green' is too dark, perhaps because I used the wrong green base for the mix. But it'll do the job on the table top. Just the Sturmovik and the Tempest top go.
at April 14, 2013 5 comments: