North America, June 1862, the Battle of Cross Keys, well a rough approximation anyway. We took a scenario from an old Miniature Wargames magazine, and converted it to Volley and Bayonet for our first American Civil War game in quite some time. It probably should have been fought at the lower Wing scale, but we opted to use the map and forces at normal VnB scale. The game was fought using my 15mm ACW forces (mostly FreiKorps figures). The buildings are scratch built from card. 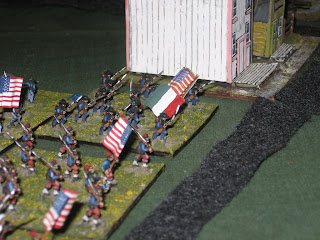 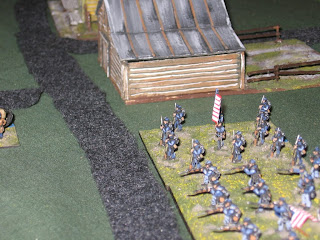 Confederate forces deployed in some of the many wooded areas of the battlefield. 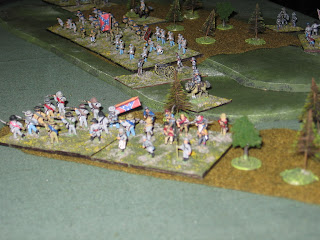 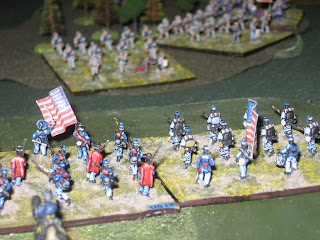 The Confederate right/Union left, where so much of the action took place. The ravine that was so significant in the original battle is just behind the Confederate forces in the upper left of the photo. 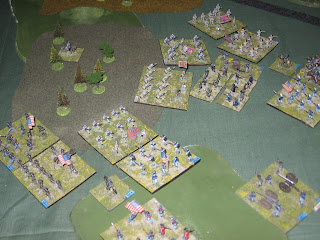 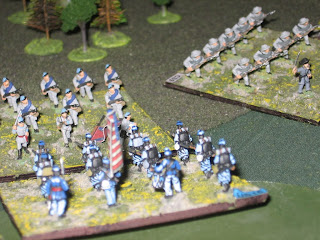 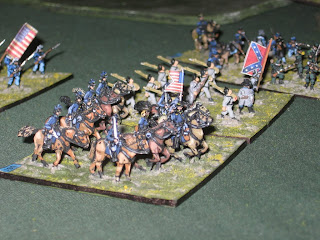 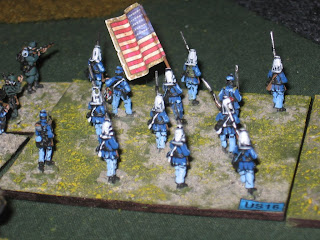 The Union commander masse much of his artillery in his centre to try to blast the Confederate defenders out of their positions. 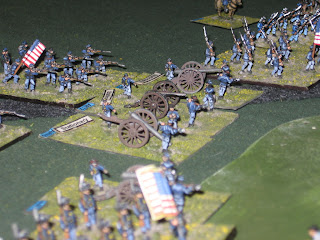 The Confederate right deteriorated in to a swirling melee with massed short range fire ringing out through the trees, and mad screaming as units charged and counter charged. The battle was eventually won by the Union attackers.

In the meantime the Confederate defenders boldly attacked through the centre. Here they are seen charging one of the defending Union brigades. However even here they were bloodily repulsed, and overall victory went to the Union forces. 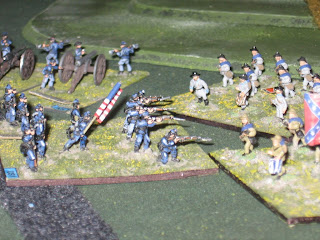 We were in this case more interested in creating a good quality game than in recreating the original historical battle, and we succeeded. This was  a close fought battle in which the balance swung several times. The Union forces snatched a final victory with a series of last turn charges that took advantage of a couple of very small battlefield advantages that had occurred on the Confederates' previous turn.

As always, a damned fine game.

One slightly contentious aspect of the second edition VnB rules for us is the zone of control. We decided to opt for a house rule where the ZOC only exists directly to the front of a stand (rather than extending to the sides as well), and to use the DBX WADBAG interpretation used in DBA games called the 'rolling carpet' interpretation. That is, The ZOC stops when it meets the first enemy unit. It works well in our opinion.
at July 24, 2010 No comments:

I'm quite a fan of the work of NZ Historian Glyn Harper. I had bought and read his two books "Massacre at Passchendaele", and "Spring Offensive", but when 'Dark Journeys" was released I resisted, as it included these two books, plus what I simply understood as additional material. When I recently saw a copy on sale at a much reduced price I thought it might be worth buying a copy. I really should have read the Contents page more thoroughly when it first came out. The third part of the book is titled 'Bloody Bapaume', and what an eye opener it is.

Harper details what was in fact the bloodiest battle in which the NZ Division was involved on the Western Front, the taking of Bapaume in August 1918. His analysis is interesting, and not the least xenophobic. He details what he sees as the failings of the division at that time, not the least of which was the number of commanders who had been so recently promoted into their positions (in command of Brigades and Battalions) and so had little operational experience in their new positions, with units of these sizes. He also proposes that the Division came through as well as it did because Russell (operating at well below his own best at this stage, Harper suggests) had created what Harper calls a 'learning organisation' in which lessons were quickly learned, and in which men at all levels were willing to take control and resolve problems with which they were confronted without waiting for direction.

Haprer's analysis of casualties is interesting. He points out that Russell amongst others significantly understates the casualties that the division suffered in the battle, and is also able to show how badly the battle was reported in New Zealand, citing one newspaper that declared that Bapaume had fallen 2 days before it actually did.

I thoroughly recommend the book, even if purely for the account of 'Bloody Bapaume', and of course if you haven't purchased or read the earlier two books on Passchendaele and the Spring Offensive, then the book is an absolute gem. The book is published by Harper Collins, 2007.
at July 21, 2010 No comments: