A deep dig into the good old fashioned spares box produced this creation - an airboat for the Turkish VSF army. 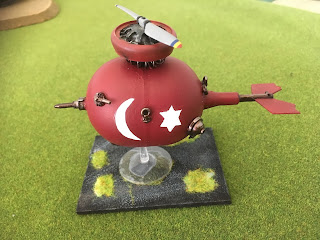 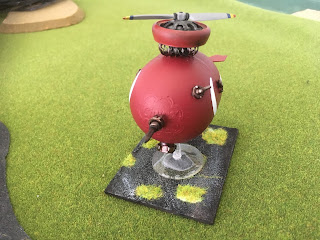 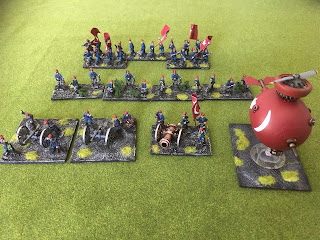 The body was a sweets container from the late 80s or early 90s (when our kids were little - they are both in their 30s now). Might have been 'chuppa chups'? Or something like that.

I had two, the other I use for the aerial hero for the British VSF.

I sifted through the spares box for the other bits that I added. The fins were from an old Airfix Bloodhound missile, the cupola on the bottom (not sure if you can see it in the photos) from an Armourfast A13, and the other bits from a Warhammer Dwarfs sprue.

The 'weapon' on the nose is an old biro point/refill, and the 'rotor' assembly on top- are the propellor, radial engine and cowling from an old 1/32 Boeing F4B kit.

There always seems to be an issue with 3 pointers in army composition (a function of the maths of factors, I guess). So in total there are three 3 pointer elements in the army.. that's awkward, demanding either another 3 pointer, or a 1 pointer somewhere.

I like the airboat theme for VSF generally. I think I was inspired by HG Wells 'War in the air'. So maybe another airboat?
at November 11, 2017 4 comments:

These two artillery bases for the VSF Turkish army were one of those 'quick wins' in painting terms.The guns and figures come from the Strelets 20mm Turkish Artillery 1877 set. They are standard artillery and offer two 3 point elements. 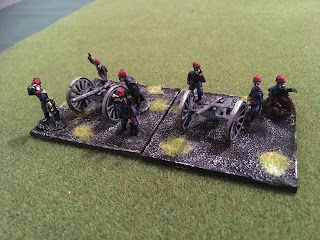 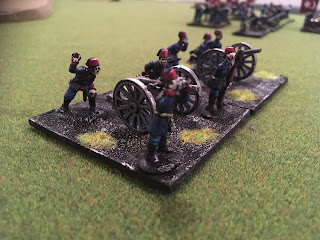 And the Turkish VSF army so far: 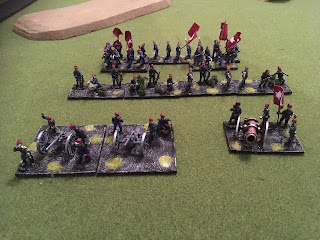 Of course none of these elements yet reflect the particular theme I want for this army, other than that it is Turkish.

It's been fun thinking about how to depict the range if 3, 4 and 6 point bases in the Turkish VSF HotT army. I decided that there should be a gunner hero, a tribute to Mohammed the Gunner, if you like.

I used figures from the Strelets Turkish Artillery 1877 set, and some pieces from the spares box. The gun barrel came from the GW Dwarf set, mounted on some Airfix napoleonic artillery wheels.

As this is a great hero, I thought he ought to have a standard bearer with flag too. I'm reasonably happy with the result. 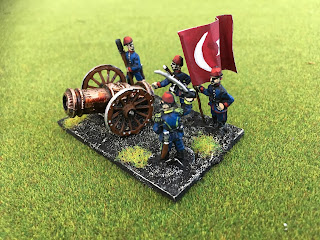 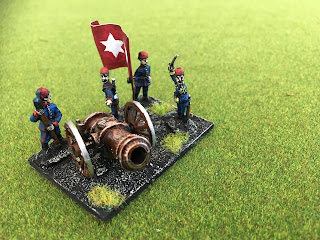 The army so far, with blades, shooters, and the hero. 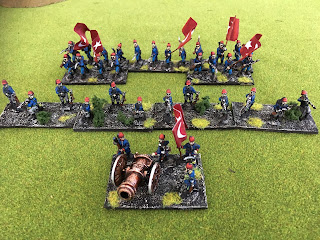 I think the next couple of bases will be pretty unsurprising, but I'm still formulating/plotting/scheming some more interesting and thematic bases to add. The goal will be a 72 point Big Battle army, but.. one step at a time I think.
at November 05, 2017 3 comments: