Nick and I played another Spearhead game in 20mm today. This time I composed two forces of approximately 450 points per side, with the game set in northern France in late 1944. The game was an encounter game devised loosely around Keith McNelly's Scenario Generation System. Each side was of approximately regimental strength, with around half a regiment of armour and some off table artillery in support. The British were supported by 3 battalions of 25pdr guns, while the Germans had a regiment of 105mm howitzers in divisional support, and a regiment of 150mm guns dedicated to counter-battery support.

The first view is of the battle field at the start of the game, with the Germans entering from the left and the British from the right. 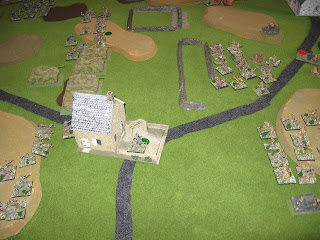 The British left flank battalion. The British armour can be seen behind in support. 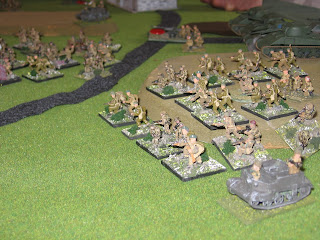 This town sector was pivotal to the British left/German right. The Germans were first to occupy it with 3 platoons, with the reminder of the battalion and the armour and in support. Nick assaulted with two platoons. In an attack the likes of which I've never seen before he won the battle for the town, eliminating all three occupying platoons... extraordinary!!! 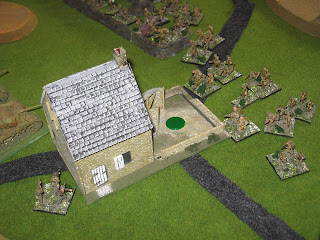 The German armour sat in support of the battalion holding their centre. The opposing British battalion took fire from the 105mm howitzers, the tank battalion and the infantry battalion. Despite the cover provided by the stone walls casualties mounted there and on their own left around the town. 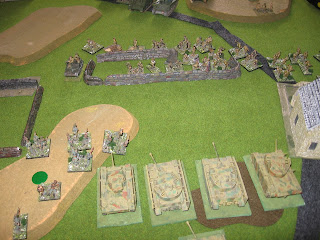 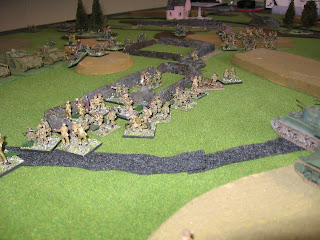 Nick then changed orders for his armour and began a push around his left. The defending British infantry battalion then exceeded both 50% and 66% casualties in the one turn, and took two morale  tests. It passed BOTH!! This British performance on their left was a day to remember. 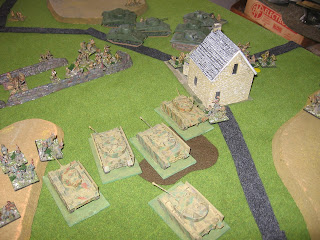 The German armour began to push forward to take advantage of the flank that the British armour had presented as it attempted to attack the German right. 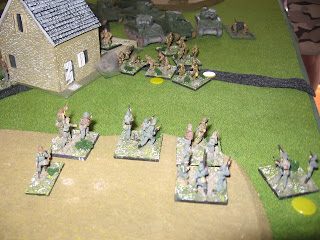 At the same time Nick now tried to apply pressure to the German centre by advancing. Nick was also by this stage beginning to make use of his artillery, concetrating fire from all three battalions. However as a consequence the German counter battery observer had been hard at work, and located all three battalions. Counter battery fire had begun, causing casualties on the British gunners. 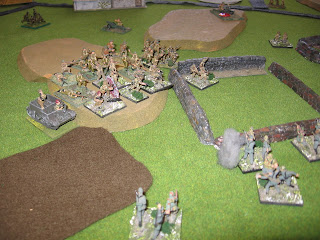 I had decided to use my reserve battalion to try to take the bridge objective on the German left, and then to attack the open British right flank. However I miscalculated how long crossing the stream would take. This battalion took no part in the battle. 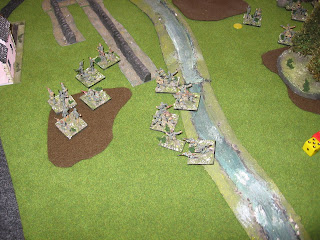 The game ended after 3 hours play, with the Germans scoring 5 victory points to the British 3, and of us having enjoyed a pretty good afternoon's game. Game play had been a little slower than you might expect as Nick learned the rules. The terrain had also hung up both sides, with both forces initially avoiding the stream, and so concentrating the deployment in a much smaller frontage than is usual.

All in all, a great game, and proof that SH will still work with 20mm figures and vehicles. My own plan was actually pretty mediocre, and I can easily imagine that with a few more games under his belt, Nick would have taken me apart quite convincingly. So, I may now need to base all of my old 20mm WW2 collections ready for some games.. sitting in those boxes is a HUGE pile of Russian kit... sigh!!

As a matter of record, today marked a cool milestone in the Eastern Front 1914 project: the first Russian infantry division is pretty much complete. Currently it has four regiments of 3 battalions which is arguably slightly later in the war (introduction began in 1915 if I have the correct), but it is now a viable game force. Ultimately the Scenario Generation System demands two divisions for Attack scenarios, but this single division is at least usable on the table for basic encounter games. 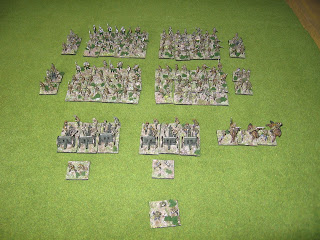 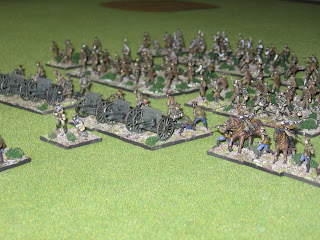 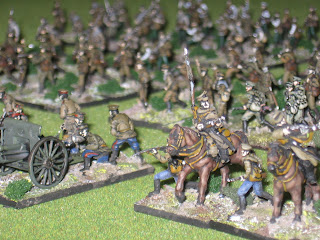 Completion of this first division was one of my summer painting goals. Now for a wee 'mini' project that has been percolating for a while, with the first figures on the painting desk ready to go. It fits with the Eastern Front 1914 theme.. stay watching!
at January 18, 2012 2 comments: