More as a matter of record than anything, this photograph marks the completion of the 6mm eastern front 1914 armies, with the final (planned) Russian infantry regiment. 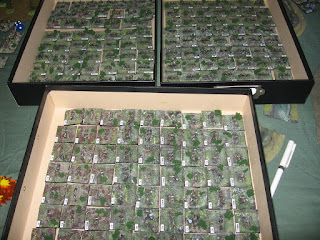 There are three German divisions, and two Russian infantry regiments. Arguably the proportions should be the other way around, but the third German division came about primarily because of the discovery of troops I'd ordered in 2007, but somehow overlooked.

The Scenario Generation System will typically demand more Russian than German troops, because I tend to give them random morale status making them a little cheaper under the points system. However at this stage I don't plan any more Russians (let's see if I can keep to that claim).

I could now embark on Turkish and Austro-Hungarian troops to pitch against the Russians, but this will do for now.
at January 16, 2016 3 comments: