The bane of the wargamer's life: rebasing figures. However this little exercise is really about finishing something I began a long time ago. Volley and Bayonet (Frank Chadwick) became my rules of choice for all 1700-1900 'gaming, and I set about some years ago completely rebasing a very large 25mm French napoleonic army. Several years ago I was lucky enough to acquire a large Spanish army to use as an opponent, most of which had already been rebased for VnB. However there were quite a few figures still not done, and no command stands. The size of the forces was really too small to fight larger napoleonic actions as well. Our game last week really drive me to the point where I decided to do something about it.

So I've set about finishing the rebasing the remaining infantry (9 regiments worth), one remaining regiment of cavalry, and enough command stands for the entire army. This will give me about 3000 points worth of Spanish in VnB Road to Glory terms. 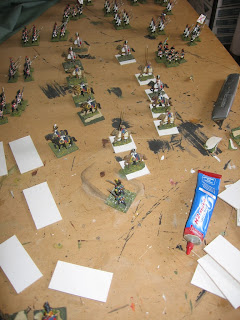 This is also a part of my current drive to finish a number of nearly finished projects. Next are the alst of the Dwarves to finish the WFB army, and I've line dup in my sights some behicles that will allow me to put the 40K IG army to bed as well. There's a certain smug sense of self satisfaction in getting things finished ... and it's nearly Christmas.... yep!!!
at December 15, 2010 2 comments:

Email ThisBlogThis!Share to TwitterShare to FacebookShare to Pinterest
Labels: General, Horse and Musket, Volley and Bayonet

'Mud beneath my boots'

A colleague from work recently lent me a copy of the book 'Mud beneath my boots' by Alan Marriott. Mr Marriott has used the journal kept by his uncle Len Coley to produce this extraordinarily good account of one soldier's personal experience on the western front from 1916 to 1918. 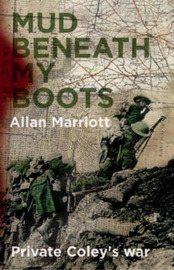 Len enlisted at age 17 (lying about his age,  using an assumed name of Len Collins ) in 1915 and served with the NZ Division in France, fighting on the Somme, Ypres and again at the Somme in 1918.
The book is well written, and provides a fascinating insight into both the fighting, and the 'war weariness' that must have engulfed so many soldiers after years of war.

Here is a small extract from the book, describing action at Passchendaele in 1917.

"Meanwhile, I made arrangements to move up to the right flank of the Hawkes Bay Company. With the aid of willing helpers. I secured my position from snipers. I erected a barricade of timber and sandbags taken from a dugout that was useless to us. I was sure Fritz would post snipers on the ridge overnight to try and silence our guns in the early morning and I wanted good protection. I completed my job and took a rest while I had a chance.

Their second attack came at 4pm. But my gun was now cool. I had cleaned it and it felt in beautiful order. I wanted to get down to tin tacks straight away. If Fritz succeeded with this attempt, it would give him a whole night to consolidate his position. And we had to prevent that at all costs.

Fresh reinforcements for the Germans poured over the ridge in front of me and I decided to hold my fire. The Germans were a poor target with the sky behind them. I waited until the face of the hill gave them a background. I opened my fire, emptying one drum in a single burst. When I gave a short burst from the second drum it jammed. It took nearly   minute to clear the expanded cartridge case, and I was at it again.......

...... Our concentrated fire from four guns at this end played havoc with Fritz. We wiped out their right wing, their remaining men fleeing. This broke up their attack and we lengthened our range another 200 yards towards the German right wing. We could see that the Aussies were being hard pressed. The fleeing German line in front of us probably saved them on their end. The whole German attack now gave in very quickly."


This is an extraordinarily good book, a great read and thoroughly recommended.
at December 12, 2010 No comments: