Annual HotT Carnage tournament tomorrow, and Nick has traveled up to Christchurch from Dunedin to play. Being a little rusty, he asked for a couple of practice games, and this was the first. He is using his African safari animal army, and I chose to use my Undead army ... an army made up of assemblages of bones, fighting an army of wild animals. I should have known that this wasn't going to end well...

I deployed with my centre secured by 2 stands of zombie dogs (beasts in the rough going, with Hordes and hooters on the right and my Hero and Blades on the left. Two Magicians sat behind, waiting to hurtle magical devastation at the enemy. 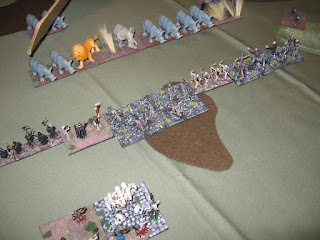 The Magicians began their incantations, raising the forces of chaos from beneath the ground. 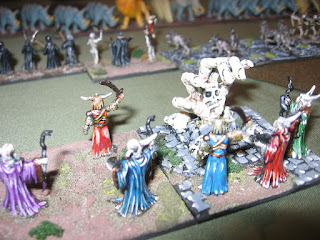 The air reverberated as bolts of magical power zapped through the air, sending one of the two units of flyers (vultures) hurtling to their doom. 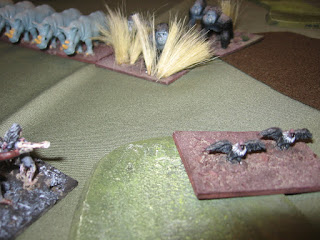 The rest of the force advanced, Behemoth general and Lion Hero in the battle line. 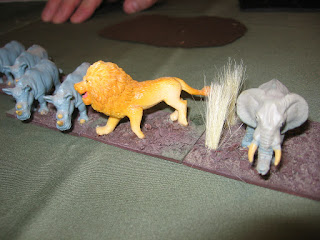 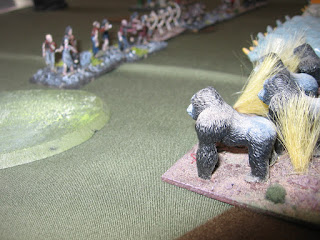 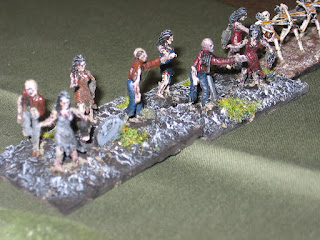 The Hero destroyed one of the units of zombie dogs... ahhh, bones.. 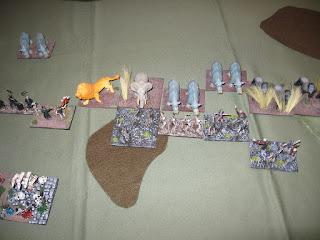 But the Undead hero shifted to fill the gap. 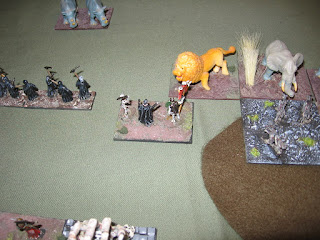 Before his very eyes the African Hero disappeared, the result of powerful forces of magic. 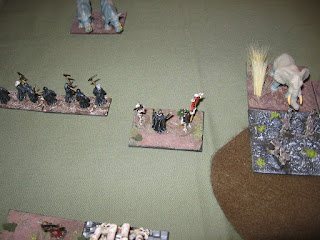 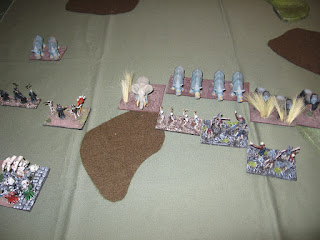 In quick succession the Zombie Hordes and the undead shooters disappeared before their general's eyes. 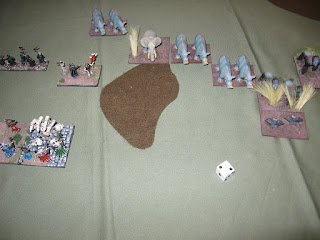 The Undead Hero struck again and a unit of Rhino Knights fell beneath his  deadly blades. 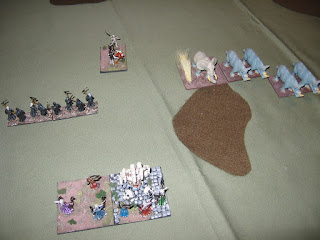 With a '6' the Hero broke the magic shackles that had bound him to the netherworld, and appeared to assault the Undead Stronghold. 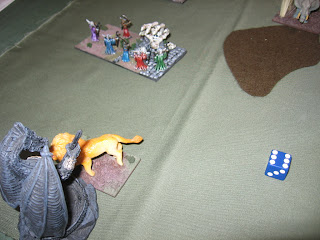 And in short order the battle was over. 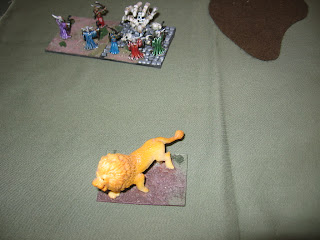 Carnivorous animals against an army of bones? I should have known that this wasn't going to end well.
at December 01, 2012 1 comment:

The mainstay of Russian artillery battalions during the Great Patriotic War was the 76mm Zis 3 gun, and no Spearhead Russian force would be complete without them.


Normally most artillery in Spearhead games is off-table, so there is no need for the actual gun models. However the difficulties in gaining artillery support with Russian forces (perhaps more correctly the inflexibility of the artillery in tactical terms) means that I have fought games in which the guns rarely see action. I therefore tend to model the artillery battalions on-table. This way, careful deployment means that even if your observers find it difficult to acquire the support of their guns, the guns are present and able to fire direct in response to threat (albeit at a much reduced range). They often guard my flanks - a slightly precarious existence if you are an artillery battalion gunner or commander.

They are deployed in mixed battalions with two 76mm gun stands, and one 122mm gun stand in a battalion. Last week I acquired the models for the 76mm guns from Stan. These are the UM models, and were quite an eye opener for me. In my opinion these are 'modellers' kits. The detail is finely molded, the detail excellent. Many parts fitted so well there was no need for glue ... I don't recall ever buying a kit with such precision assembly. I've also never before bought a 1/72nd or 1/76th scale kit in which the wheels come with separate tyres. 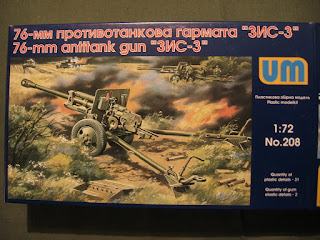 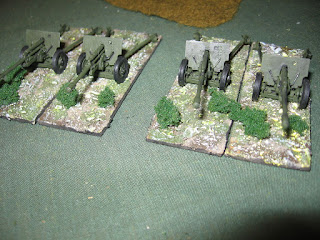 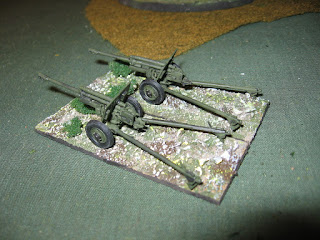 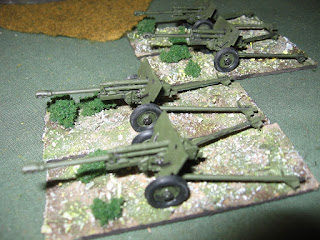 They certainly are great kits, it's just that I'm in this as a 'gamer rather than a modeller.. I prefer those fast assembly kits. But if you are a modeller, or a 'gamer with a little more modelling patience than me, you'll love them

I also bought two UM Su76 self propelled guns... these look equally as precise (read 'fiddly' for my large fingers). These are next onto the painting table - this may take quite some patience!!.