Counter-attack onto the German plains.

The counter offensive had been a week or two coming. NATO forces had weathered the storm of the initial Soviet assaults and everyone had held their breath as hands had hovered near firing buttons that might have forever changed the world.

However ground forces had held, and now British forces had the opportunity to take back ground from the Soviet aggressors.

Andrew, Keith and I had got together for our first Modern Spearhead game for - well, we were almost too embarrassed to be too precise but it had certainly been some time.

The game was constructed using Keith's scenario generation system, and die rolls had placed me in the rare position of putting in a deliberate attack against a Soviet defence.

My attack list had the usual two mechanised infantry battalions and one tank regiment, with the tank regiment and one of the infantry battalions cross attaching to provide combined arms maneuver units. The tracks and boots on the ground were well supported with a Lynx helicopter flight, and plentiful artillery, including two M107 battalions tasked with counter battery missions. The RAF had promised plentiful support from its harrier squadrons, with an AGC embedded with the ground troops.

I opted for a left flank attack, keeping one mechanised infantry battalion in reserve behind my centre. Division had made it clear that the small towns in the area were to be taken at all costs in order to unhinge the Soviet defence. The Lynx flight was to arrive as the attack progressed, with a pre-planned waypoint ahead of the attacking armour in order to support the armoured push around the Soviet right flank. 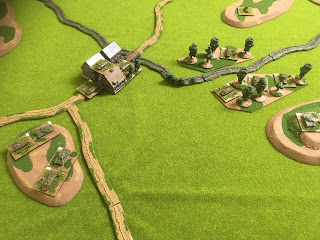 The British advance began but quickly came under heavy fire from a battalion of Soviet 152 mm howitzers. Two Mechanised infantry platoons were immediately put out of action. However British counter battery assets were quickly on the job, locating the Soviet guns. With a devastating barrage the Soviet battalion was destroyed.

The British strategy of taking control of the battlefield progressed, with ECM locating the first of the Soviet on-table AA assets. The M107s were quickly on the job eliminating the AA platoon.


Pressure was mounting on the Soviet right, and commanders committed their reserve, a T62 battalion. 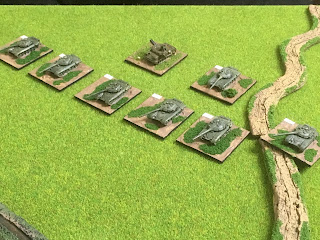 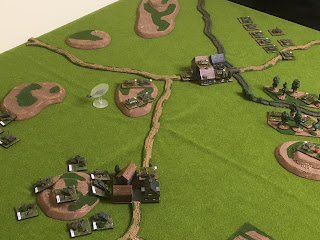 The right hand British attacking battalion advanced on its objective. 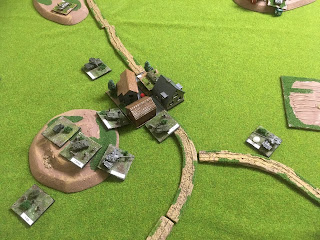 Pressure lead the soviet commander to withdraw it's right flank defending battalion, preferring to leave the job to the advancing T62s


The British battalion assaulted its objective but was repulsed with losses. Meanwhile the Lynx flight shifted across its waypoint to support the right against defending armour. The battalion itself pulled back to regroup after its failure to take its objective. 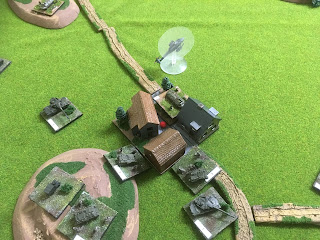 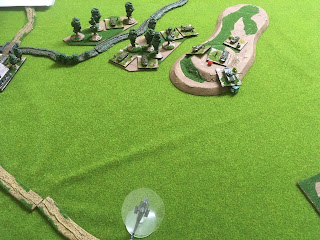 
The British Chieftains on the heights began to engage the advancing T62s with effective AT fire. 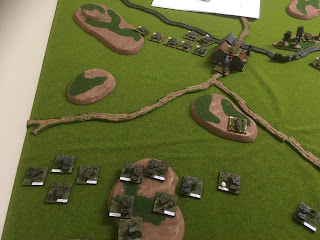 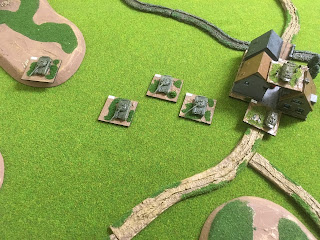 The Soviet left is hanging on by the thinnest of threads. The British right flank battalion alerts its attached AGC who contacts the airbase to call in the first of three Harrier strikes, and the reserve battalion prepares to advance in attack against the flank and rear of the soviet counter attack.

At this stage we ran out of time. The Soviets still commanded the objectives, but their line had reached breaking point. British air assets were intact, the Soviet air defence had been seriously degraded, and their artillery all but silenced. Their on table armour had taken serious losses.

As I said this was our first MSH game in several years. It reminded us of how good the games are. I harp on about the fantastic challenge and satisfaction I find from the 'multi -layering' of weapons systems that the games system presents. It is the challenge of putting together a plan, coordinating those weapons systems, and fighting a clever opponent, that make this such a satisfying game system.
at October 08, 2016 2 comments:

Who's that clip clopping over my bridge?

Barbarian hordes always seemed to me as if they should have a stompy brutish feel. So for the HotT barbarian army, what better than a couple of trolls to lead the human barbarian warband?

Allow me to introduce Zog (with apologies to all of those fantasy comics and movies), the Behemoth general of the Barbarian hordes. A behemoth general will be a new slant amongst my HotT armies. 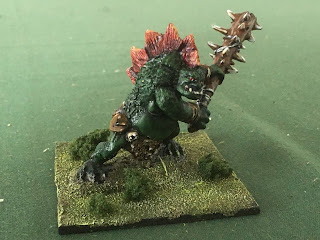 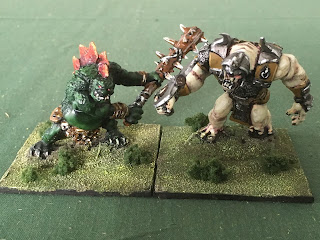 As a Big Battle army the Barbarian army needs some more 4 pointers (currently these boys just have Zog and Lizzie, and a tree God). Still pondering that one. And these kids can also be of sue in a Kings of War army too ....
at October 05, 2016 1 comment:

While on a brief holiday type foray south to Dunedin I managed quick visits to the two fantastic second hand bookstores in the city. From 'Scribes' I picked up a book of Owen Marshall short stories ( I have a thing for NZ literature, there's awesome stuff out there and we need to read it as we constantly re-assess and define our identity), and from 'Hard to find' I picked up this little gem (ISBN 0 908564 75 9, Dunmore Press, 1981):

I have had  a longstanding interest in the subject of coast defences in New Zealand, and in the early 80's even did some research on the topic. That research went no where from an historical perspective, but it did inspire a piece of historical fiction that still sits in the files on my laptop.

It is easy in this modern age to sit back in judgement of the decision makers of the day, and the New Zealand public generally; their Russophobia might seem to us today to be laughable. Yet to them it was palpable, stirred up by people with a range of agendas both political and mischievous.

Barratt was a Professor of Russian at Carleton University, Ottawa, Canada, at the time he wrote the book (first published in 1981). He traces New Zealand views of the Russians from the 1830s through to 1908 and of perhaps the greatest amusement for me as I red was his account of  David Luckie (a journalist) and the Kaskowiski scare of 1873. In his story he claimed that the Russian ship the Kaskowiski had slipped into Auckland Harbour and using 'mephitic water gas' had overpowered and seized the only British warship present in the Waitemata Harbour at the time. Detachments had then been sent ashore to seize the armoury and magazines, occupy the telegraphic offices, and then proceeded to the Provincial Council Chamber to demand a large ransom from the Banks vaults around the city.

"Luckie's hoax enjoyed immense local success. The morning after (Tuesday, 18 February), he himself described the flurry it caused, stressing the comic element and minimising any anguish that the warship Cask-of-whisky might in fact have caused certain people."

To the modern reader the stories are at time humorous, and it is difficult to understand the angst that this 'phobia must have caused for the colonists of the time, staunch as they were in their belief that the Royal Navy should be providing protection for them. Such was their belief that it took some time to organise coast defences, and any sort of vaguely efficient  Volunteer Force with which to resist any sort of armed attack or landing.

However worried they were, it was only the Russian defeat by the Japanese in 1905 that closed the covers on the story of New Zealand;'s Russophobia, only then to be replaced by a growing fear of Japanese attack.

Barratt's writing style is not the easiest to read, but the book is a rich source of research evidence and commentary on the  subject.