I added this little lot to my DBA collection a month or two ago, drawn from a larger DBM army (which frankly I don't use that often any more - well not at all, and yes I could use it for FOG, but haven't really taken too well to that either).

So I took the necessary stands from that larger DBM collection, and tidied them up a little. Here they are. Mostly foundry figures (so 25mm rather than 20mm), while the ballista is 20mm Irregular.

They make a nice opponent to the Early Germans I completed a few months ago. The scale difference is ok for us. 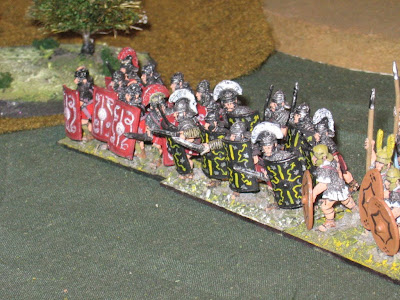 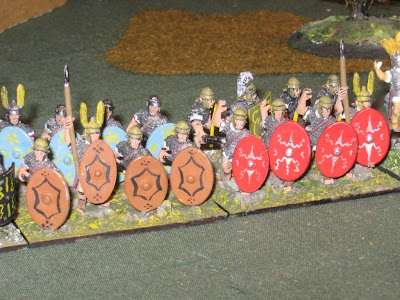 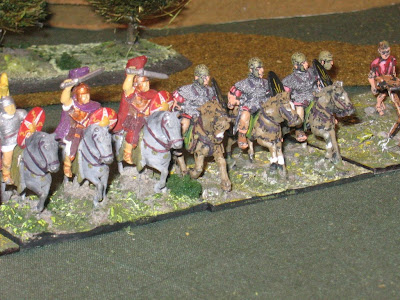 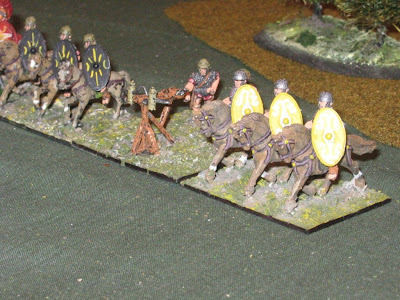 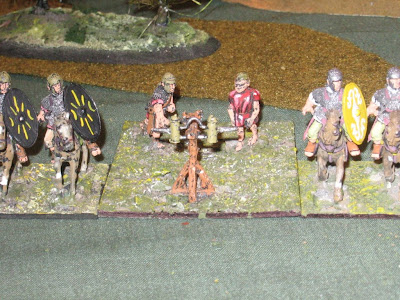 The other view of the Somme

All of my previous reading on the Somme (1916) has been totally Anglo-centric. I had read accounts of the British advances against German trenches, the fruitless 'battering' of those German lines with row upon row of British bodies, the allied successes in the south etc. This reading had shaped my entire perception of battles on the western front between 1914 and 1917.

And then I read "The German Army on the Somme, 1914-1916" written by Jack Sheldon. The book (published by Pen and Sword Publishing, 2005, ISBN 978 1 84415 513 2) gives an account of the gargantuan battles of the western front on the Somme from the German perspective, drawing from German unit and personal diaries. The insights that I gained from this book have been profound. The paradigm within which I think about those mammoth battles has been changed forever...

This was not some sort of battle in which fresh German troops emerged unscathed from deep dugouts to mow down row upon row of pristine British infantry. This was a battle of materiel in which human beings of all three nationalities were caught up. All suffered the inhumanity of battle, the inhumanity of man to man.

My enduring image is now not only that of British troops suffering in no-man's land, but also of German troops suffering under the often described British and French 'drum fire', artillery barrages of such intensity that men shivered in fear for day after day. I have wanted to type a quote from the book to show what I mean (despite the publisher's concerns about such activities.. such quotes could do nothing but promote the book to all serious students of the first world war), but I have struggled to decide which to type. I chose the following, knowing that in itself it cannot do justice to the book, nor to the experiences of the men whose words are printed there.

"After dawn, the artillery fire increased, peaking at about 8.00a.m. Enemy airmen flew low over us, machine-gunning the position and giving their hooter signals. One entrance to the dugout was crushed. The artillery fire continued relentlessly, high explosive being mixed with shrapnel fired by the flanking batteries. casualties were already considerable..... At about 1.00p.m. the second entrance to the dug out as crushed, so, for a time, I was cut off from the company. We worked with all our strength to open the entrance and succeeded."

And from another entry dated 12 December:

"The regiment has now been in the line without relief since 26th November. because of the adverse weather all types of colds, chills and gastro-intestinal illnesses have appeared. Despite every effort to improve the lot of the troops, it has proved impossible to counter these illnesses, or to prevent them from spreading. The freezing wet and cold weather, wet dugouts, work in flooded trenches with a mud a metre deep, extremely strenuous carrying duties to transport rations and trench stores......."

and so they go on.

These words from Professor Richard Holmes in thbe forward to the book:

"Jack Sheldon observes that the Allies did not succeed in breaking through on the Somme, nor did they destroy the morale of the German army. But he agrees that it was never the same afterwards, and quotes a Bavarian general who acknowledged that: "The monster of the modern overwhelming machine of war gobbled up our finest men". But in a sense to talk of victory and defeat is to miss the point. as this book makes so very clear. the Somme was a supreme test of human qualities, and the soldiers on both sides displayed them more abundantly than their political leaders deserved, or those who were not there could ever really recognise."