My fame and fortune in the local HotT tournament scene has been earned with my Spider army (Nick G has posted an excellent AAR of our game in last Sunday's tournament here). As Nick comments, it was the only game I lost out of 5, and it was a pretty thorough thrashing I have to say.

The army composition I used was: 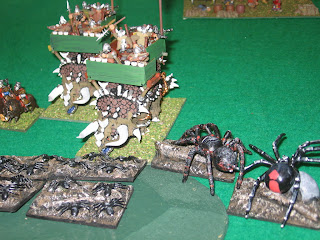 I have always considered Horde armies to be weaker than most, but now I'm not so sure. The basic approach has been to surround my strongest elements (the Behemoth and Hero) with plenty of Hordes, hoping that the opposing army becomes bogged down in the horde of Hordes, while the two biggies do the business. I generally don't count on the God; if he turns up that's a bonus, but I try to plan the battle in my head on the assumption that he doesn't.

I had traditionally considered Hordes to be weaker elements, but I guess that with a CF of 2, they are strong enough to hold out, and deployed 2 deep, near the baseline, they do indeed tend to wear the opponent down. The opposition's 'mental fatigue' isn't helped by the constant redeployment of lost Hordes as well. This redeployment means that I try to keep my 'battle line' close to my own base line, so that those Hordes brought back onto the table at least have a running (or scuttling, in this case) chance of getting back into the battle.

So, having mentally gone into two tournaments now with the view that the spiders were the tournament 'easy beats', I have had to change my mind. Maybe Hordes aren't too bad a bet after all.

As I think Joseph Stalin once said (correct me if I'm wrong) "Quantity has a quality of its own."

A word of warning.. in today's tournament, in my 3rd game, against Nick G, my spider God (Spiderman - well who else??? really, I mean!!!) turned up to play, only to turn around and leave again within a couple of moves. I was not amused... 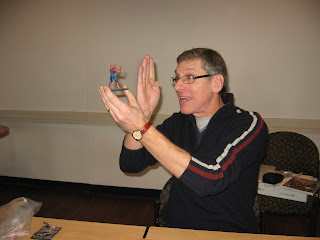 ... so a jolly good talking to was in order. Spiderman was given a very clear description of his antecedents, and a warning about the consequences of any future repetition of this behaviour.

He failed to turn up at all in the following game (perhaps in a fit of pique), but then made a jolly good showing in the final game. Clearly he'd taken the time to think about what I'd said!!

Email ThisBlogThis!Share to TwitterShare to FacebookShare to Pinterest
Labels: HotT

A change of pace in my 'gaming, with this year's 'A HotT Winter's Day' tournament. This year there were 6 of us playing, so the format was simply everyone plays everyone else once for 5 games each, and a total of 25 games over the day. No individual game write-ups this time, but a selection of photos from some of the games that took place over the day.

This yeea, for a change, we allowed players to change armies during the day. It was all about getting some pretty cool armies onto the table, and having fun, and judging from some of the shouts and jeers (who'd have thought 6 'gamers could make so much noise), there was plenty of fun to be had as those dramatic 'cinematic moments' unfolded. 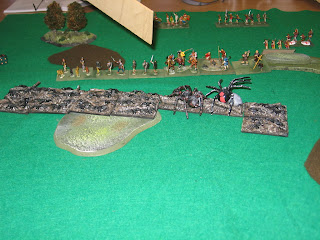 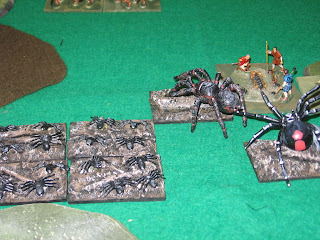 Spiders vs Dwarfs: The spiders had just disposed of the Dwarf general. 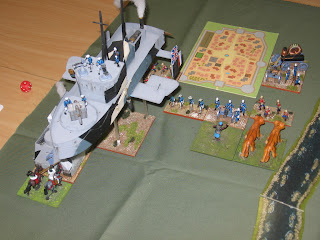 Spiders vs British VSF (this was the game I lost during the day.. Nick G gave me a 'damned good thrashing'!!): 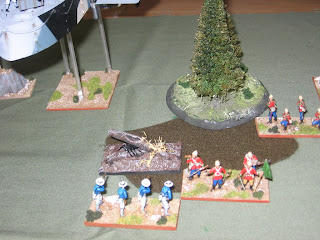 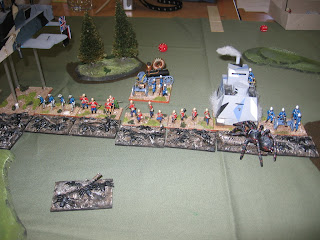 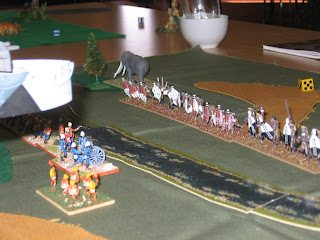 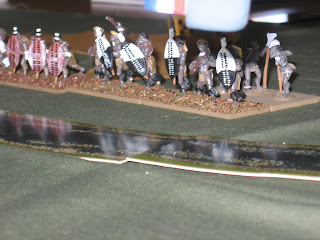 Spiders vs Easterlings: The spider behemoth general making beady eyes at the Easterling Paladin .. nom nom nom.. eventually he made a meal of the Paladin. 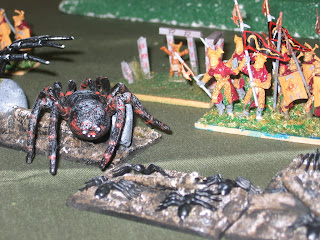 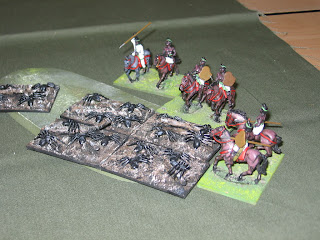 The Indian magician general looked ot be introuble but managed to extract himself and have his revenge by driving off the spider behemoth general, and then bespelling the spider hero (on the right). Sadly for Nick S, his God showed up, then left on the very next move, while the Spider God turned up, and proceeded to chomp his was through the Indian riders. 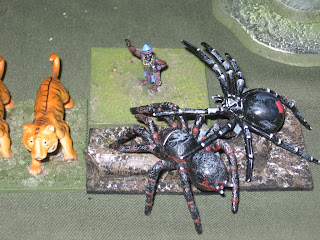