It's 1862,  the Union has pushed south, and the Confederate forces have marched out to meet them. Here are just a few shots from last night's ACW game hosted by Keith, with Jon, Andrew and me. The game was created with the Volley and Bayonet Road to Glory scenario system, using Jon's 6mm Ros Heroics figures.

The scenario saw the Union right wind facing the onslaught of the Confederate army on its own for several moves. The wing deployed with one division holding the town astride it's lines of supply, and the other deployed forward, advancing on its first turn to occupy some fields of standing crops. This division took the full brunt of the Confederate attack from its two best divisions and was thoroughly beaten. It was however a Pyrrhic victory for the Confederate forces as, in defeating the Union advanced forces, they spent their own strength and took no further part in the action. 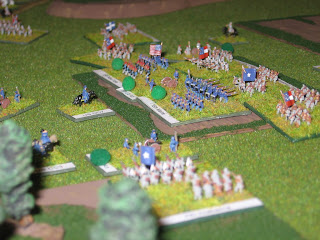 Union reinforcements advanced to occupy heights in their centre, and woods to their left and right. 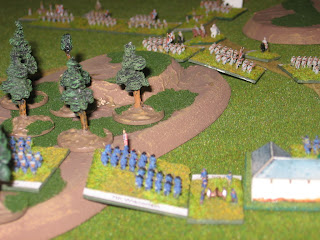 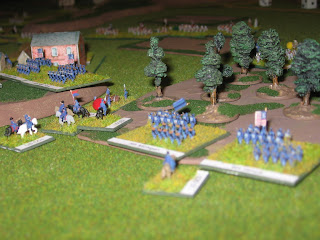 The Union left was then assaulted, but managed to repel the attack. 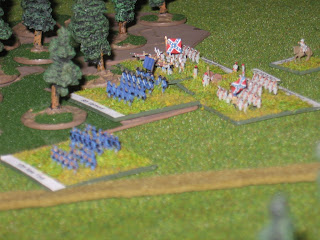 A solitary Confederate brigade, repelled form it's own attack on the Union left,  sitting in front of a Division of Union  mounted infantry, taking some serious short range flank fire from the only repeating rifles in the entire Union army.. ouch!! 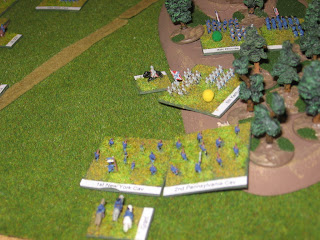 And the remaining Confederate reinforcements, having arrived in march column, decided to about turn and 'skedaddle'.. probably a wise choice in the circumstances. 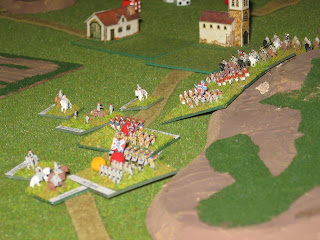 A good ACW game with an interesting tactical situation created by the RTG system.
at November 12, 2011 1 comment: