Hard to believe that t has been just over a year since we played any Great War Spearhead games, especially considering that the period, and the rules, are my favourites. So this week it was a play test of one of the scenarios form the exciting new scenario book due out soon built around the Tannenberg campaign from 1914.

As my life seems to feature regular 60 hour weeks, it is fortunate that most of the scenarios in the book are around the division a side size. I chose the 'Engagement at Thurau' which saw a Russian division charging into the battle area in road march colliding in an encounter battle with a German division somewhat more sensibly deployed.

Andrew, Adrian and I played the game, using my 6mm armies (figures are all Irregular).
The Russians historically advanced in road column as a result of poor reconnaissance, and the scenario requires them to remain so until contact is made with the enemy. 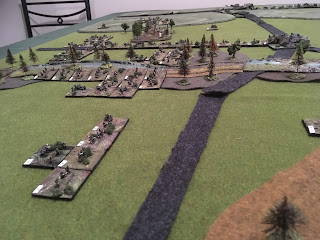 This was a really interesting action. The Russians are severely limited by their advance in road column. The end result was pretty consistent with the outcomes in the whole Tannenberg campaign in which poor reconnaissance resulted in poor decision making for the Russian army so many times.

However, who can complain when this was our first GWSH game in so long. Watch out for the Tannenberg scenario book (titled "All fine men") when it comes out.

I enjoy the use of the Litko markers to show the action. They really do light up the table, and give a great feel for the intensity of the action. Now to planning the next game.
at March 04, 2017 3 comments: