It is with heavy heart that I write this report to you from my own camp bed, recovering as I am yet again from a most deleterious confrontation with beasts most foul. You will no doubt see from the deterioration in the quality of my penmanship that I am much aggrieved by our most recent battles.

Having recovered from our meeting with the tribespeople and their ferocious beasts, the subject of my last dispatch, in which we drove these fierce peoples from the field despite their rough treatment of me and my loyal bodyguard, we proceeded to continue our advance inland. Four days we advanced, in jungles through which our progress was measured in yards per hour. The men's consumption of water far outpaced the ability of our supply caravans, and by jove those poor fellows dropped like flies from heat exhaustion.

On the fifth day, we decamped once more and had only been on the trails for less than an hour when we came across a plain on which were deployed beasts so terrifying that it took all of our efforts to steady our most steadfast of men. There before us lay arrayed creatures so hideous that even our worst nightmares might never have prepared us for what we were about to face.

Indeed there were creatures so monstrous, half woman, half spider, spiders of such size as to dwarf the very man himself, and scuttling hordes of spiders that made the very skin crawl. And from the entire host arose a noise the like of which we had never heard before.


Immediately the purpose of the strange noise became apparent, as a God like man appeared, of such size as to spread tremors through the very earth with its every step.

I ordered Lord Chelting and his supporting flyers to attack, and he flew straight into the hordes of small spiders.


Having held off this damnable God fellow, my blessed hero nephew Lieutenant Winstanley came to the rescue and threw himself, yes threw himself,  at the God.


At this point I threw myself at this God Chappie too, to aid Winstanley in his valiant fight. 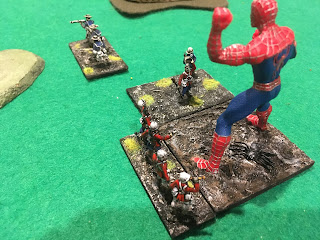 Before my very eyes, the God threw himself at Winstanley.. 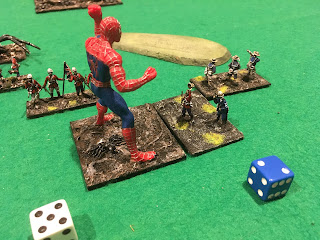 And I watched Winstanley fall before the onslaught.

It was with desperation and hope in my heart that I watched as the God overran Winstanley and his gallant crew.. I could but hope that I might distract the God for long enough that my dear nephew might be able to drag himself clear. A unit of our sharpshooters advanced to try to keep the God occupied. 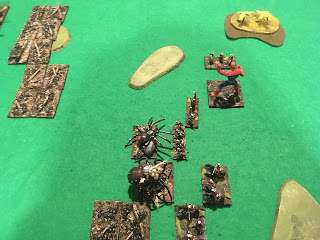 I now found myself fighting off both the massive spider hero general, and the God... by Gad Sirs, this was dire indeed.


At this point in time I once again found myself beaten most severely, and it was only by the sacrifice of my own loyal Guards that I was able to escape, all of us with much personal injury.

At this point in time my troops executed a most commendable and orderly fighting advance back to our starting positions. We were able to rescue poor Winstanley, albeit in a most aggrieved condition, while I myself sustained considerable injury once more.

I regret to inform your Lordships that several of the units of men that we deployed came to a most unpleasant end, under circumstances not at all advantageous to our glorious British forces.

We expect to resume the advance once more in the near future.
I remain, Sirs, your most obedient servant
Major General Sir Chelmswood Reginald Augustus Piers Caruthers

To the Honourable Gentlemen of Horseguards
Sirs, I have the honour to report to you that following our work to sweep aside the piratical hordes of Guayabo, we advanced into the depths of the misty jungles. On the second day, our advance brought us onto a swampy plain on the far side of which was a host the like of which we have never seen in our times. For there arrayed before us were savage tribesmen of a particularly horrid demeanour alongside beasts that we would have thought to be solely the product of a deranged artist in a child's book.

They came at us at a trot, the roar of beasts a terrifying accompaniment to the horrific cries of the wild men (if men they proved to be).

Sirs, I sent Lord Chelting of Cheam deep behind the enemy line in his fantastical flying machine, in the hope that an assault from behind would be enough to unseat the cursed foe. 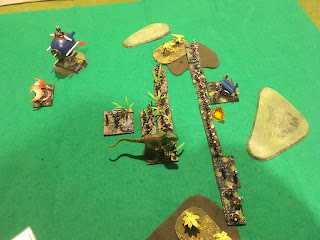 The enemy came at us again, and at this point I fear that I must report a most unfortunate event in which the glorious boys of my very own bodyguard were brought down around me. To their credit their dying act was to throw their bodies atop me protecting m form the ravages of the horrendous barbarian horde. 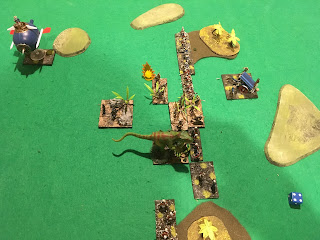 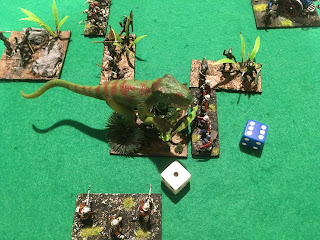 Despite my own inconvenience I can report that we finally broke the spirit of these cursed men and beasts. I can assure your Lordships that I am well recovered from my own regrettable indisposition, but mourn the loss of so. many of our brave lads. We plan to push forward into the very interior of this place on the 'morrow.