The Warhammer 40K models don't get much of an outing here. It's true that at the moment work tends to dominate life so most of my army collections don't get much of an outing, but the 40K armies even less so. Basically we have found the rules to be overly complex, with a lot of those 'annoying itches' that leave us dissatisfied. It's a shame, because we really like the miniatures that are produced for the game.

When Mantic produced it's Warpath/Firefight rules we looked forward to trying them out, and Andy and I subscribed on Kickstarter, taking early delivery of the rules. Firefight is the 40K equivalent with single based figures fought in units. Warpath steps the level of action up so that you are fielding units made up of multi figure bases. 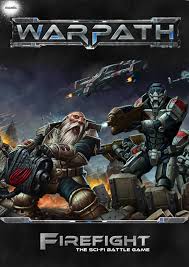 The core mechanisms are not new, but they are good. Think 'Epic lite' if you want a mental model around which to frame your thoughts. The turns are activation based, with clearly defined options for action in each activation. Players take turns at activating units on the table top until all available units have been activated. Notions like basic melee and fire mechanisms, and nerve, are consistent with those used in Mantic's successful mass battle fantasy game 'Kings of War'.

So Adrian, Andy and I set out to try the mechanisms .. something of  a baptism of fire. We didn't pretend to be playing a full game. Rather, I set out approximately 640 points of Marauders and GCPS with a little terrain so that we could test the core mechanics.

The play test didn't disappoint. We could very easily see the layers of subtlety implicit in the mechanisms. There are plenty of opportunities to be clever without the encumbrance of a 200 page tome of rules. The appropriate combination of weapons (fire and assault), and the ability to create suppression, seem to be the key.

Here are just a few shots of this small play test in action. The 'flame' markers indicate suppressions. 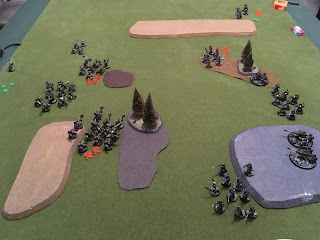 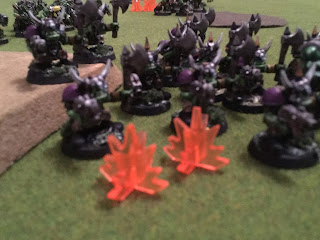 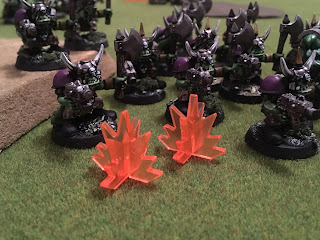 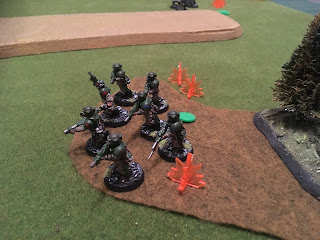 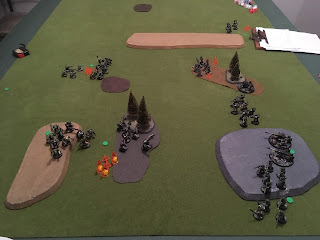 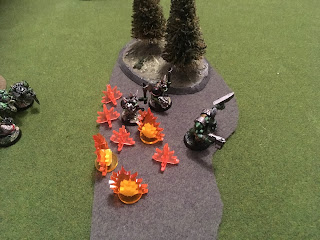 A good start. Next we'll play a proper game with a greater variety of weapons. Finally, a thinking man's sci fi game that will use those 28mm miniatures I collected and painted with so much hope.
at April 29, 2017 1 comment:

This certainly didn't look to be the best way to wake Major General Caruthers. Other news might have been preferable. Like "Sir, the next shipment of pink gin has arrived for the officers' mess". Or "Lady Magdellan has arrived to take tea with you". Or even "The newest shipment of Zap guns is being unloaded at the docks Sir.". But not "It's those damned Egyptian wallas and their animated bones again, Sir". And DEFINITELY not "Sir, that bloody flying saucer daemon that nearly did for you last month is buzzing around again."

Mind you, the best option would have been not to wake Caruthers at all. Last night had seen more than his fair share of that supply of pink gin from the officers' mess lubricating Caruthers' larynx. But tact had never been a strength for Corporal Blofeld. So there it was, out in the open - "Sir, that bloody flying saucer daemon that nearly did for you last month is buzzing around again." And there Caruthers was, post gin taste in the back of his throat, foul mood and all.

Caruthers hauled himself off his field cot and reached out his hand for his habitual start of the day cup of tea. Blofeld made sure the handle was facing the right way as he pushed the General's favourite mug into his hand. 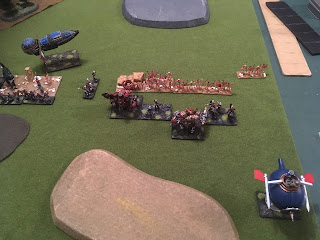 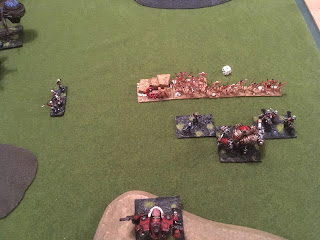 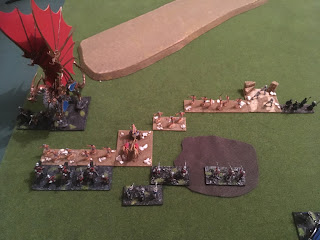 However at the end of that turn the Egyptians have lost over 50% of their army strength, and Caruthers claims another victory.

This was another epic struggle, with the balance tipping backwards and forwards throughout the game. Yet again it highlighted everything that is so good about Big Battle HotT. Both sides were noticeably starved of PIPs on numerous occasions, which explains why the British mechanical dragon was so late to the show, having arrived on table in turn 2.

And as for my deployment as the British player? What was I thinking? Anyway, a fantastic spectacle with two great looking armies.
at April 24, 2017 1 comment: 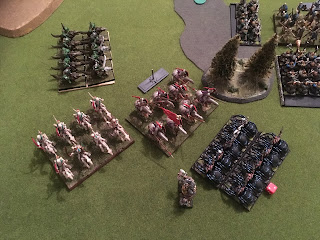 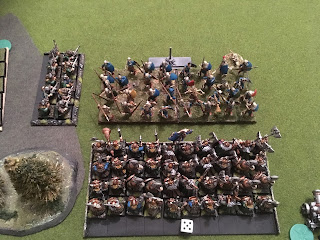 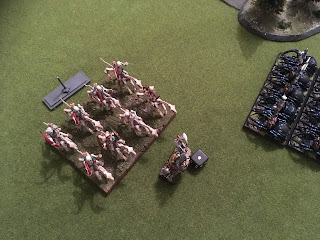