I thought the Turkish army could do with a Paladin. This is not a troop type I have in any other HotT army, but it seemed to fit with the idea of the hero, and the cleric. Not so much magic, but certainly devout. The figure can be used as a hero if I opt for that alternative, as the base sizes are the same.

The mounted paladin comes from the Strelets 1877 Turkish Cavalry box set, while the standard bearer is a simple conversion from a marching figure in their 1877 Turkish Infantry set.

The rules describe a Paladin as being pure of heart, dressed in shining silver armour. Sorry there's  no armour, this is after all Victorian Science Fiction. However I have no doubt he will be of pure heart. 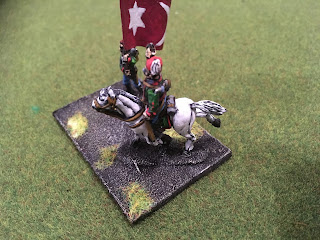 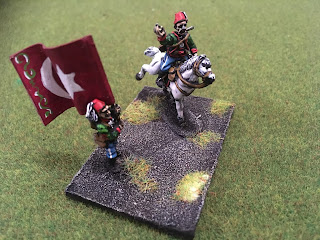 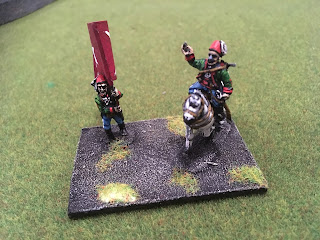 The Turkish army of the fanciful Victorian Science Fiction era is a rapidly modernising force, with generals prepared to try new technologies if these offer them an edge over their sworn enemies. So now this new flying machine.

Based (rather obviously) on the Airfix Eindecker EII kit, I gave some thought to how to make it look a little steampunk, and came up with this. The kit is pretty standard. I scalloped the leading edges of the wings, added a vertical rotor using the alternative propellor offered in the kit, this mounted on a barrel taken from the GW Dwarf box. Fuel tanks were added to the sides of the fuselage made from the drop tanks supplied with the Airfix DH Vampire kit. A swinging bomb was fashioned and attached to a stray piece of gold chain, and attached to the top of the fuselage immediately behind the pilot for ready access.

I kept to the now standard Turkish deep red colour scheme (well, standard in my Turkish VSF army anyway), with a lighter orange/red geometric disruptive pattern camouflage scheme painted over the top (thanks Andy for a great idea). 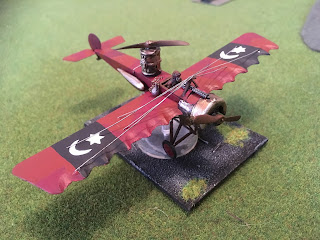 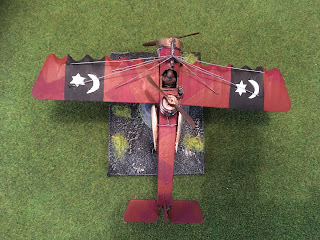 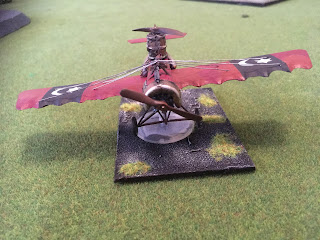 When I first bought the kit I was going to use it to represent an aerial hero under the HotT rules. However the more I thought, the more I pondered if this would be better represented as a dragon: unreliable in its appearance on the battlefield, fragile when it comes to taking damage in combat and therefore likely to leave the battlefield rather than be shot down, able to inflict a reasonable amount of damage while on the battlefield, although perhaps that damage as much to the enemy's composure and dignity as anything else as they flee in fear from this previously unknown foe.

So, there it is. Just two more four point elements to complete for the full 72 point Big Battle HotT army.