Clairemont must be held

The wind ruffled the canvas of the temporary command post set up in the forest. The rooves of the houses in Clairemont were just visible if you craned your neck and peered around the curve in the tent flap. Despite the breeze the interior of the CP was stiflingly hot.
"Well Guns?"
"Corp has confirmed those additional regiments Sir. Counter battery as well as howitzers."
Yes, but will we get them firing when and where we need them?"
"We'll try Sir."
"We need a damned sight better than 'try' Guns. Last time was a bloody shambles."
"We'll be there Sir" and lips were pulled taught across teeth in a grimace.
"Tracks."
"Sir"
Well?"
"We're ready Sir. Married up late last night."
"Again, last time was a bloody shambles. I won't have my men thrown like lambs to the slaughter because your men can't do their job."
Tracks drew breath but managed to keep his mouth closed. Men were still shot for insubordination when on active service.
"Right. We have to hold the line in front of Clairemont. The French 4th need to withdraw as they've been left wth their bloody flank hanging in the air. So we have to hold Jerry here, today, now." Eyes glanced around the CP, feet shuffled nervously. "We can do this. Just make sure your men keep their bloody heads down until Jerry reaches us, and watch the skies. No idea where the bloody RAF is. We've got to do this alone. Let's get on with it." The officers of the regiment folded maps into map cases, pens went into pockets, and the officers of the regiment and supporting units shuffled from the tent to go about their business. 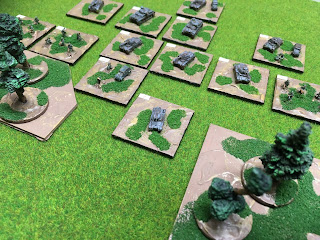 The British artillery has been busy, eliminating a battalion of German 105mm guns using its counter battery assets. One regiment of 25pdrs has also been firing in support of 2 Battalion suppressing infantry stands.

This was  a much better performance for the BEF. The Independent Tank Brigade was more correctly allocated out as support, and use was made of the capability granted within the scenario generation system to hold 3 stands in hidden deployment at the beginning of the game. The three troops of Matilda IIs were in hidden deployment.

The fact that more of the British artillery actually participated after successful die rolls was  a significant difference from our previous game, causing useful suppressions, the occasional 'kill', and perhaps most importantly eliminating the supporting German artillery with counter battery fire.

There were also still more lessons. Keith had taken 2 flights of Stukas. I was lucky that he failed to roll the requisite '6' to get their support throughout the game, as I'd positioned my AA support in a position from which it had serious blind spots.

This was another great game. Win, lose, or draw, games of Spearhead are always immensely satisfying
at March 17, 2018 3 comments: