The sun was streaming on through... 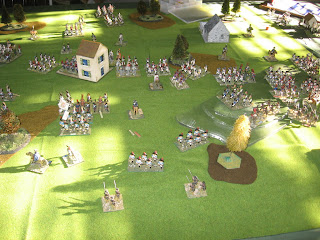 Email ThisBlogThis!Share to TwitterShare to FacebookShare to Pinterest
Labels: General, Horse and Musket

Last night we introduced a couple of new players to Volley and Bayonet, with the 25mm Napoleonic armies (French and Spanish). Brian and Frank joined Adrian, Andrew and me in a small battle using two 2000 point armies constructed using the Volley and Bayonet Road to Glory points system. The battle featured a couple of very cool episodes in particular.

The first was a swirling battle on the Spanish right flank as the French tried to defeat this wing quickly before their own left was enveloped by a division of Spanish cavalry. The second was an all out assault by the Spanish centre on the town that dominated the centre of the battlefield. Here are a few shots from the evening.

A couple of shots of the protagonists. 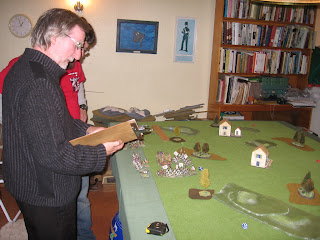 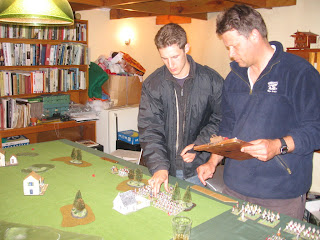 The Spanish right wing about to be assaulted.

First blood went to the Spanish when a unit of Spanish cavalry struck the French centre routing a French infantry brigade, and then making a break through move to rout a limbered French artillery battalion. 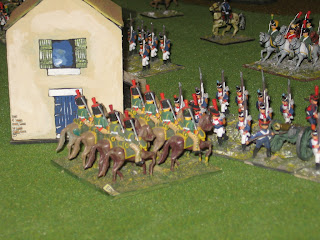 The Spanish right under assault. 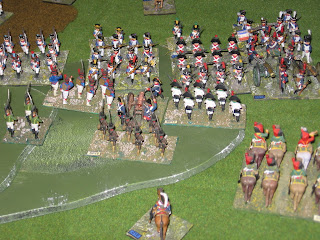 The victorious Spanish cavalry in the centre didn't last too long after their initial victory. The French CnC threw in his army reserve of Chasseurs who promptly routed the Spanish cavalry. 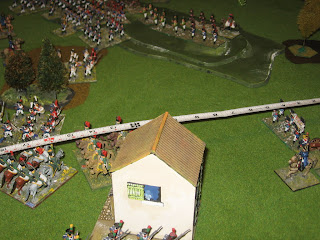 The Spanish assault in the centre: four infantry regiments supported by a couple of artillery batteries. The attack didn't go well however. The assualting troops were repelled from the town, and the French then went on to the offensive, attacking the Spanish while they were still recovering from their assault. The Spanish centre was pretty well decimated in two turns. 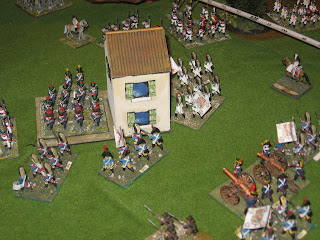 The Spanish right also finally began to crumble, well before the advancing Spanish left wing cavalry division had had a chance to get around the French open flank and into their rear.

All in all a great game with plenty of 'movie moments', and maybe a couple of new VnB converts: go Brian and Frank!!!

Setting up the game did reveal the first earthquake damage I've discovered on my armies: some books had fallen off a shelf above the boxes of French infantry (that was it in terms of effect on the 'games room, by the way, we were incredibly lucky!!), and this has broken off all of the infantry standards, and quite a few bayonets and hat plumes... sigh!!! However in the scheme of things - 'big deal', considering that just a block and a half from us there are families who have lost their homes ... have to keep these things in proportion.
at December 11, 2010 No comments:

Wow!! is this ever appropriate...

Couldn't help noticing recently that one of the boxes of figures in my games room was a rockin' and a shakin'.. and it wasn't another Christchurch earthquake. It seems that my Warhammer 40K Orks were pretty b****y annoyed, because they have never appeared on this blog, even though there was I showing off my recently acquired GW games mat. So I guess it's about time (they were after all the first 40K army I painted) ... and here are a few of them, including a couple of war bosses (it's most imprtant that the big bosses are kept happy, eh???), respendent in all their green-ness on the new games mat. Hopefully they'll stop rattling their box for a while..... 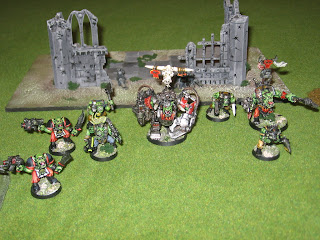 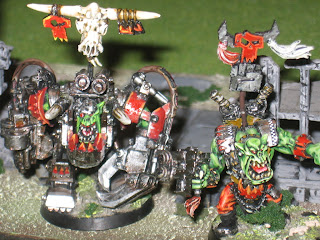 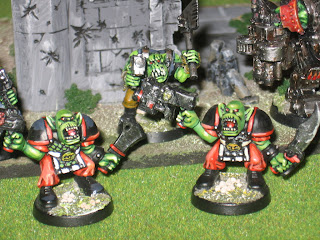 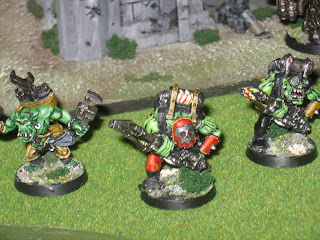 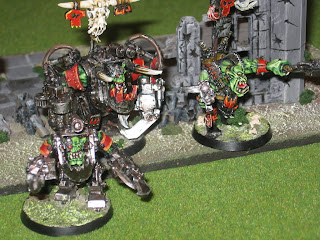 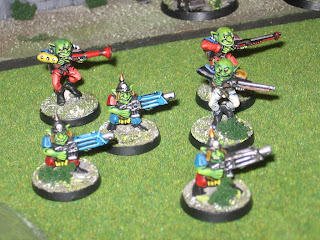 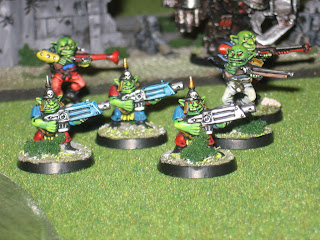 ..... or maybe I just need to get them out of their box on 'exercises' a little more often. Regardless of the gaming, they are beautiful miniatures to paint though!!
at December 06, 2010 No comments: