'The Kiwis will advance'. It is late 1944 and the armoured brigade of the New Zealand Division, accompanied by two infantry battalions, is tasked with breaking the German line in northern Italy.

Nick and I met for a game of WW2 Spearhead played with our 20mm armies. I commanded the Germans and took a potentially powerful but also fragile panzer Division list while Nick took parts of the New Zealand Division (a regiment of the armoured brigade accompanied by two infantry battalions).

The table looking west. The German force entered from the right, the New Zealanders from the left. 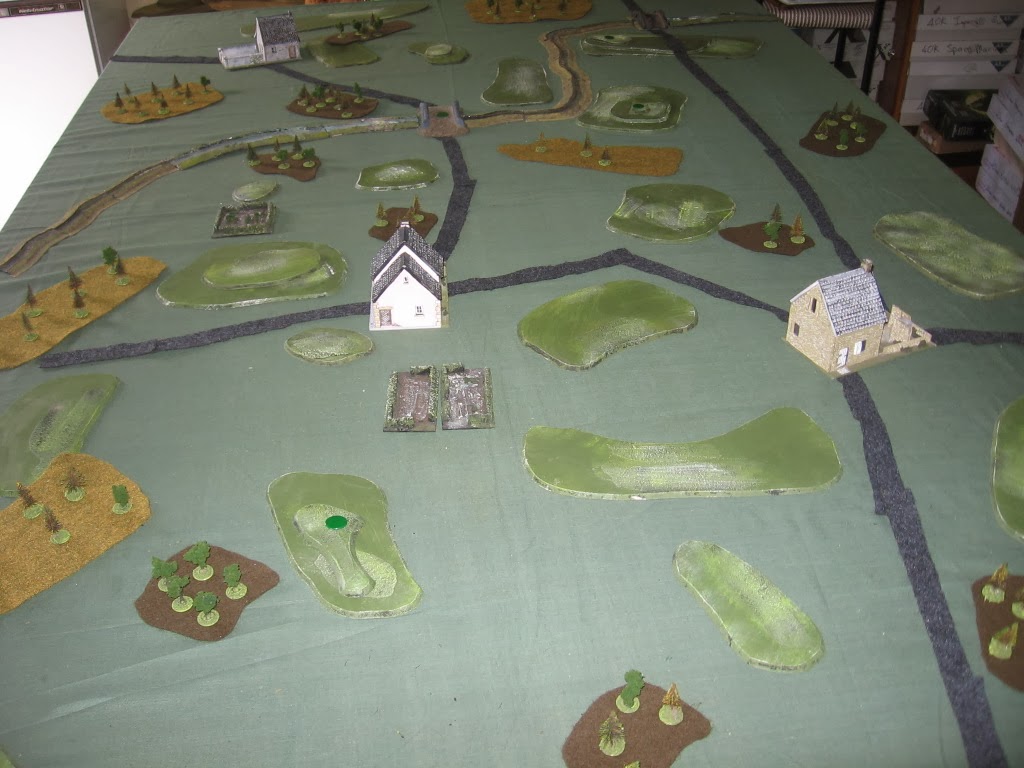 Nick concentrated all of his forces to the west of the river where I had advanced with a motorised infantry battalion supported by tow StuG III platoons. 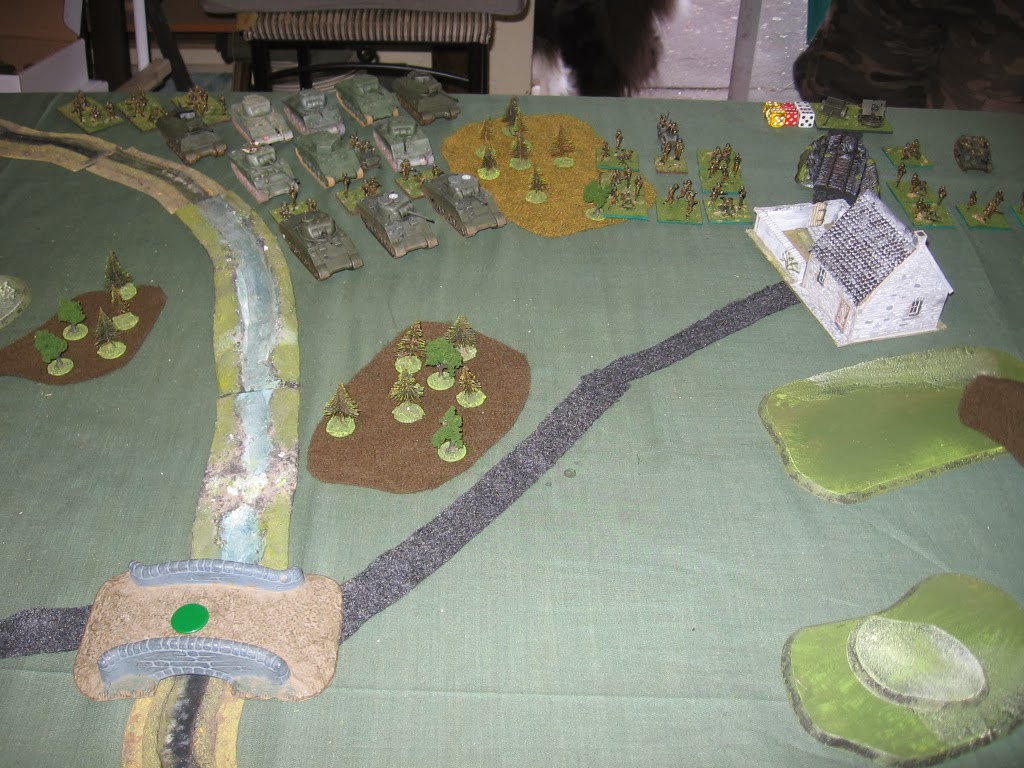 I expected him to be on the other side of the river, so I had concentrated the armoured battalion and Gepanzert battalion (cross attached) in tow groups in the more open ground.


Even though Nick had concentrated his entire attack on his left against the German right I was reasonably confident. The two StuG platoons took up positions on the high ground behind the river, with the infantry in support. They had a battalion of 105mm guns in support.

My plan was to hold them on the river line long enough to swing my left flank force around onto their flank. My centre battalion group was held in reserve, and so I expected to swing them on a shorter arc to bring quicker support to the defensive motorised battalion on the right. 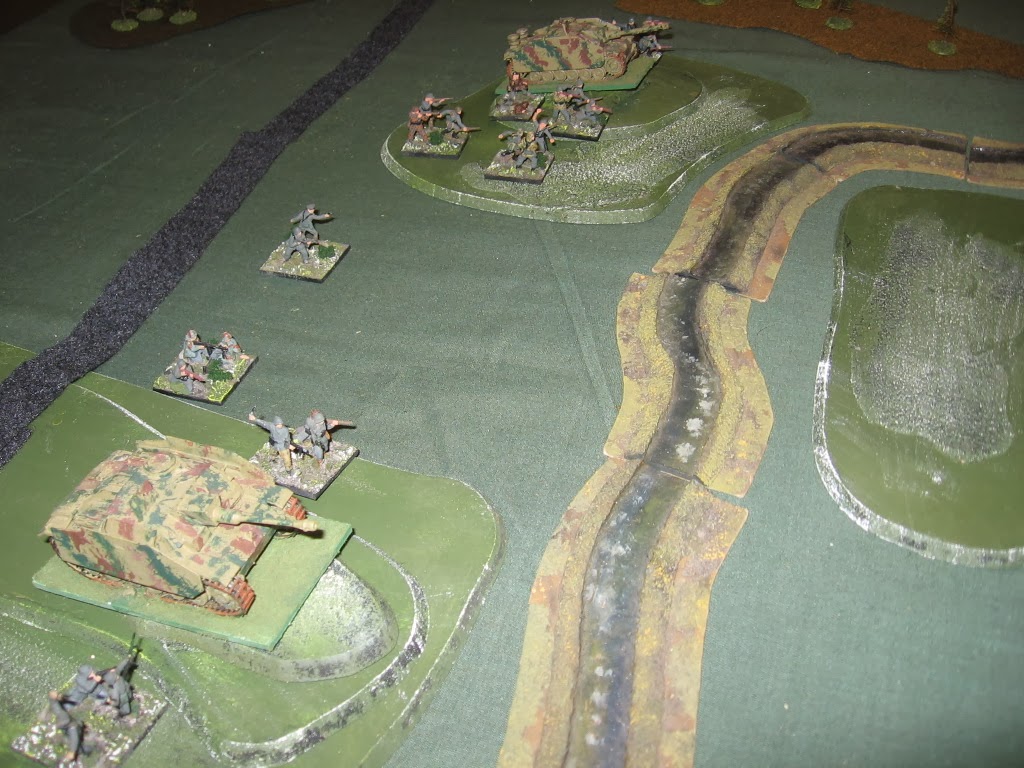 Nick pushed his force up to the river line as quickly as possible. High ground immediately to the west of the river meant that their approach was covered. This was the floor in my defensive right wing deployment. 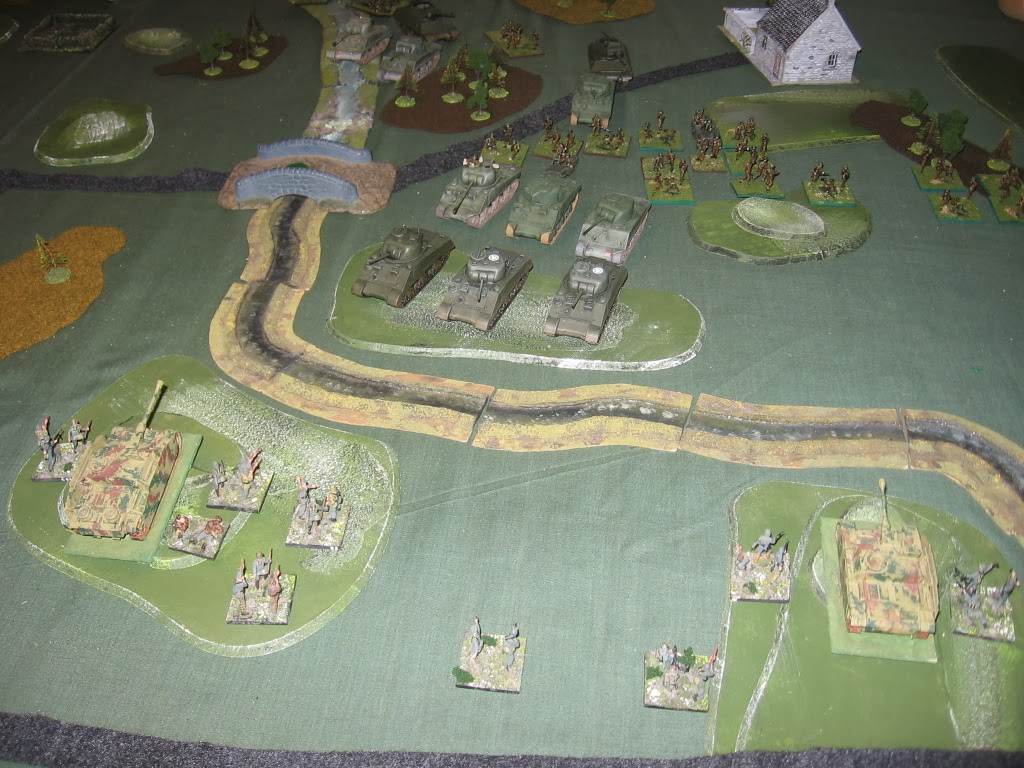 At this stage I ordered my reserve forward. I also issued an order change that started my left wing in a wide arc designed to hit the New Zealanders deep in their own right flank. 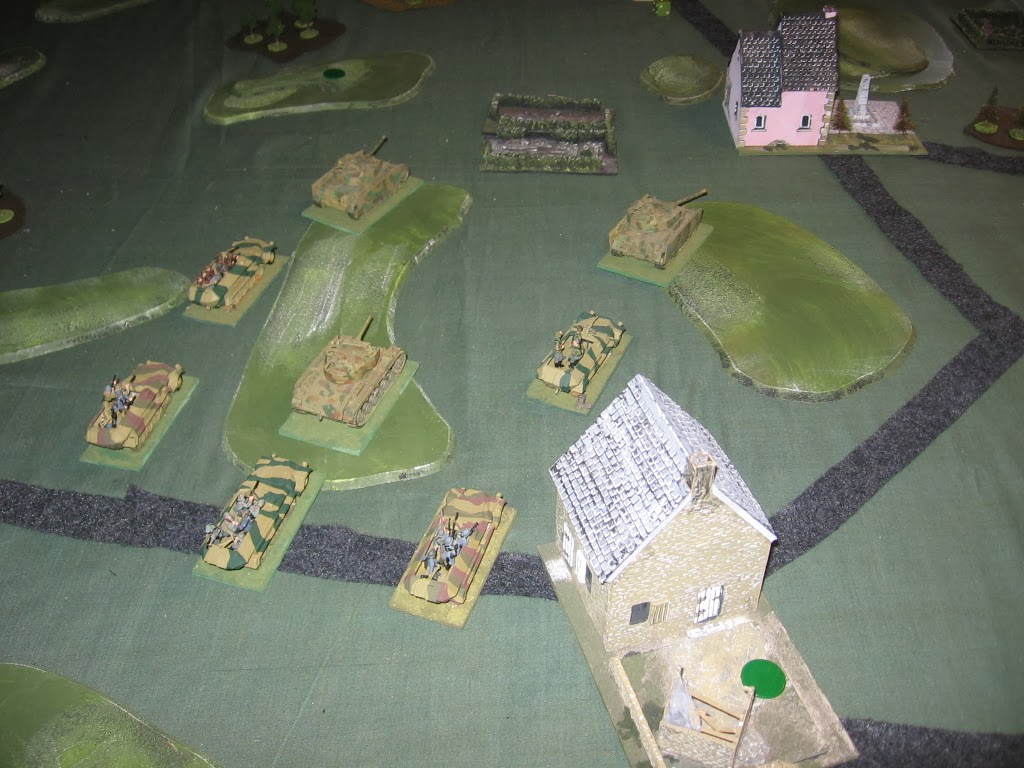 Having spotted the German centre battalion advancing from its reserve position Nick's right wing platoons held back as a tactical reserve were able to manoeuvre against the German armoured infantry and PzkwIV platoons. 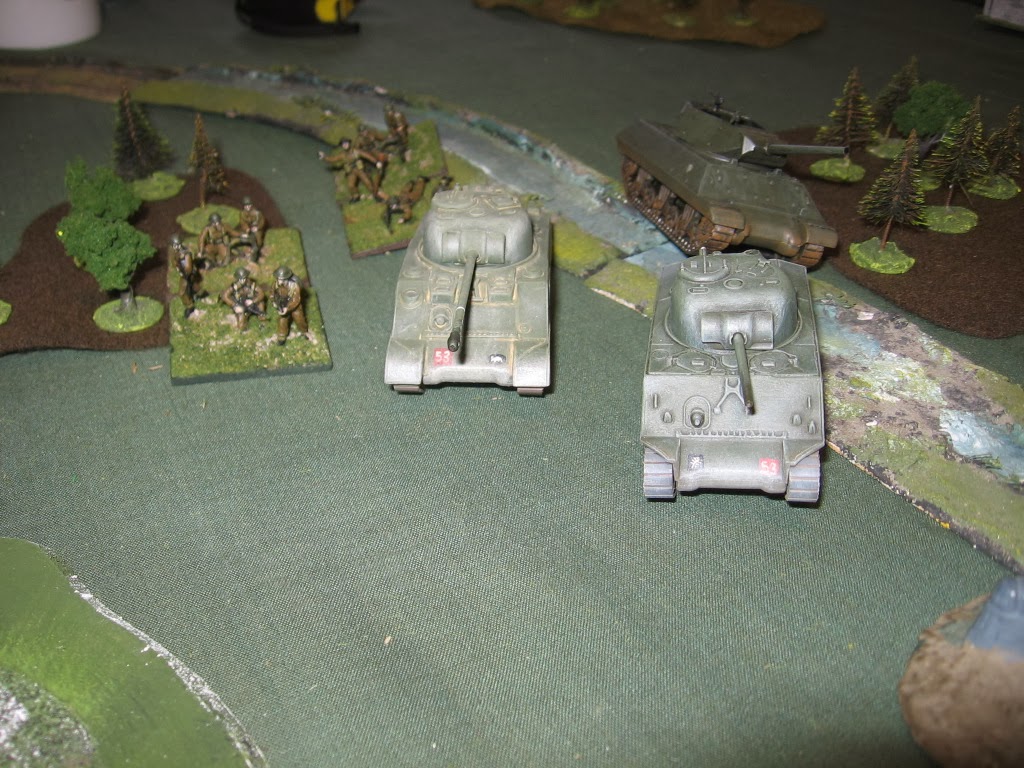 At this stage Nick successfully called in an air strike. The attack was successfully pushed home against my right wing defensive position (my Flak cover was with the reserve in the centre just out of range of the target units), eliminating an infantry platoon and, more importantly, my Forward Observation team controlling the 105mm guns. This was a defining moment in the battle a sit stripped the right wing of essential heavy support. In the same turn Nick succeeded in calling in a regiment of 25pdr guns. These managed a suppression against one of the StuG platoons with a 'lucky shot'. 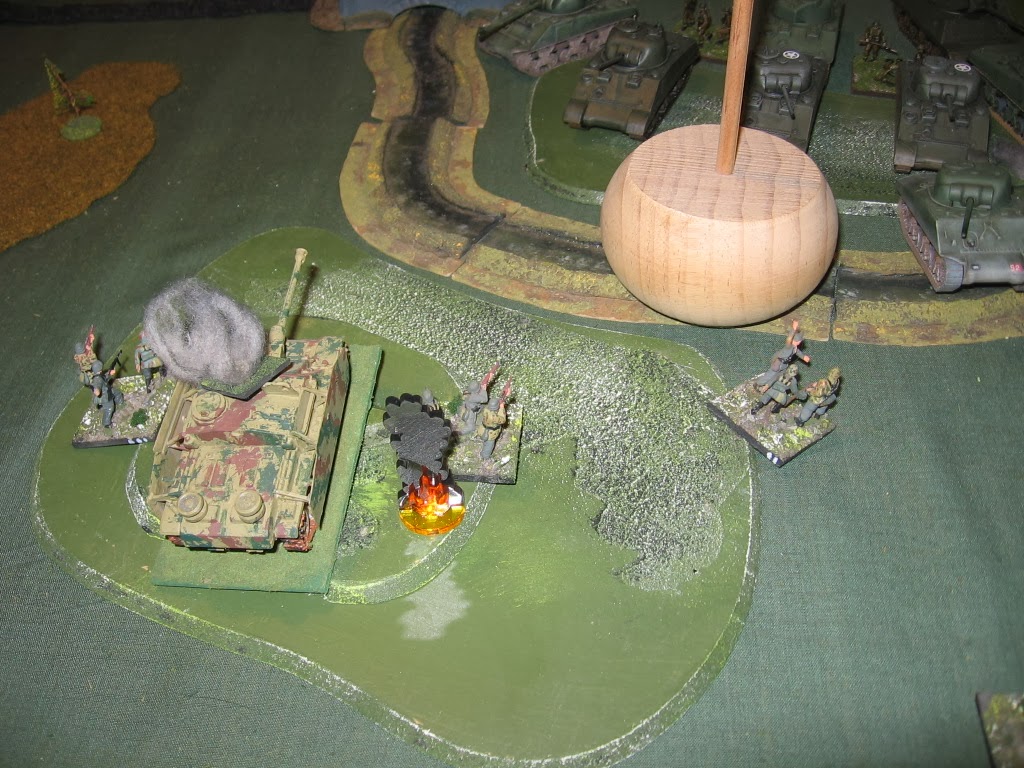 The StuG platoon was then eliminated with a second suppression by one of the M4 Sherman platoons. 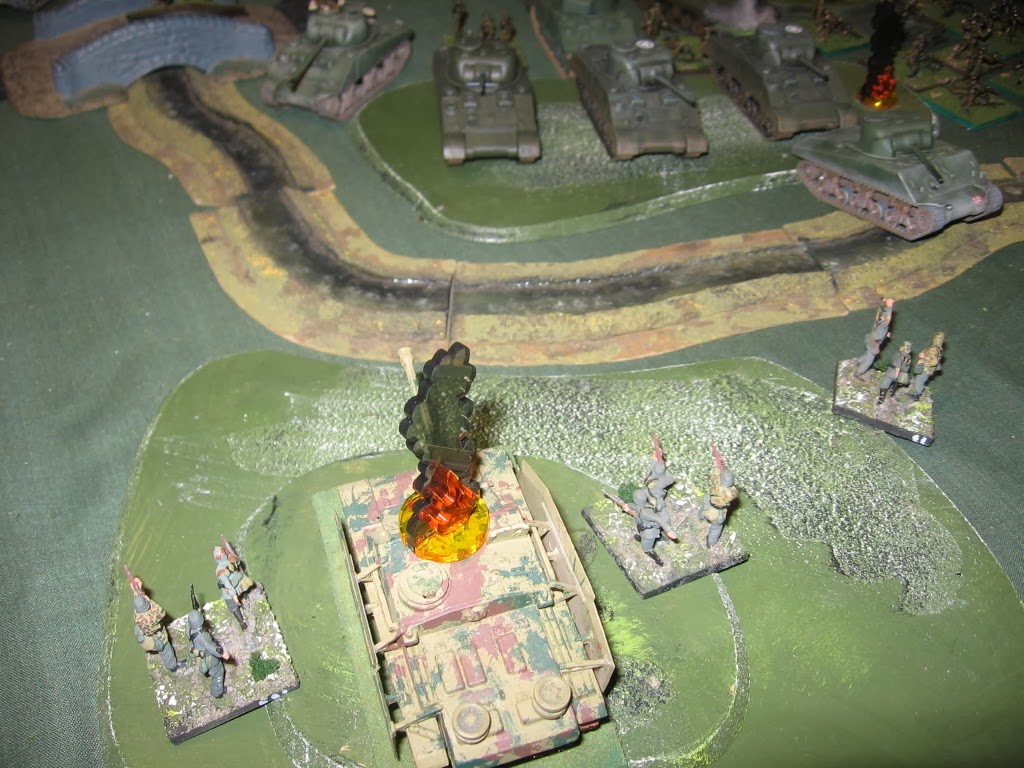 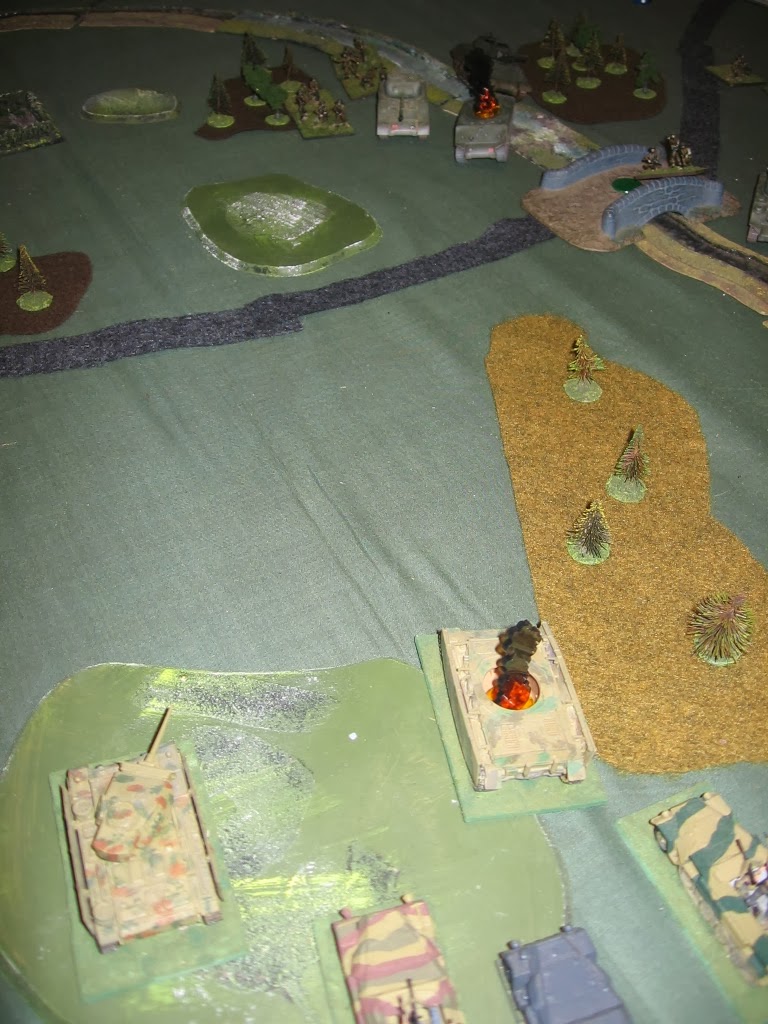 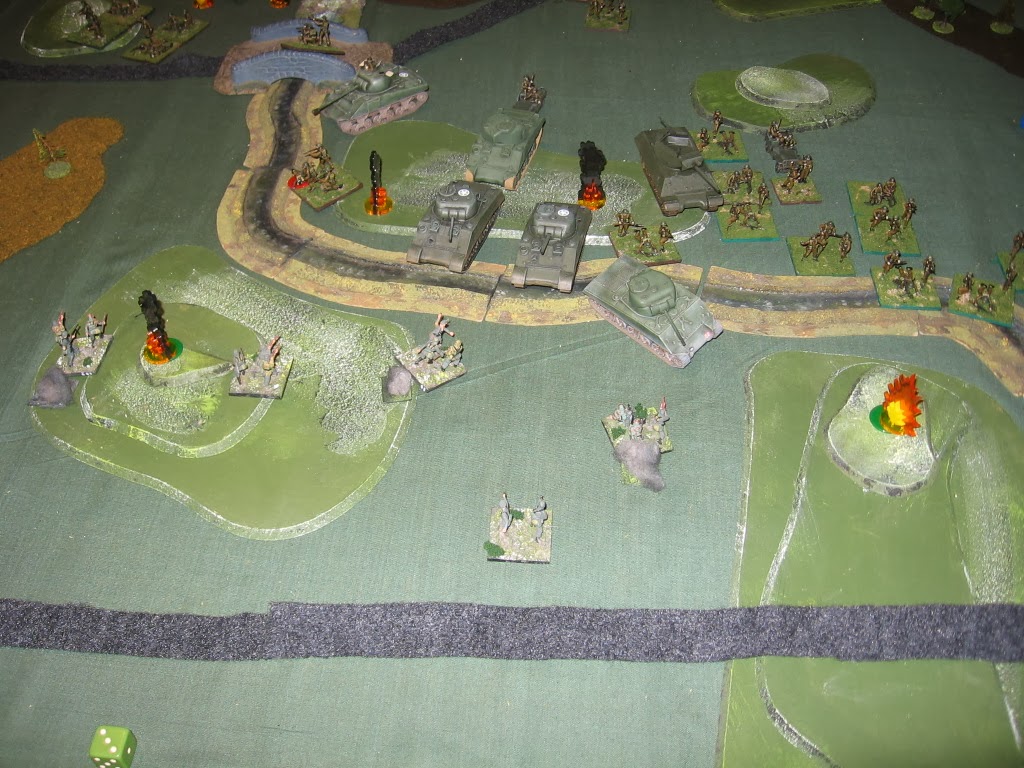 Disaster for the German motorised infantry battalion. Stripped of their armoured support, they are vulnerable to armoured over run. Fire suppresses four platoons, and three fail to lift suppressions. Nick attacks. 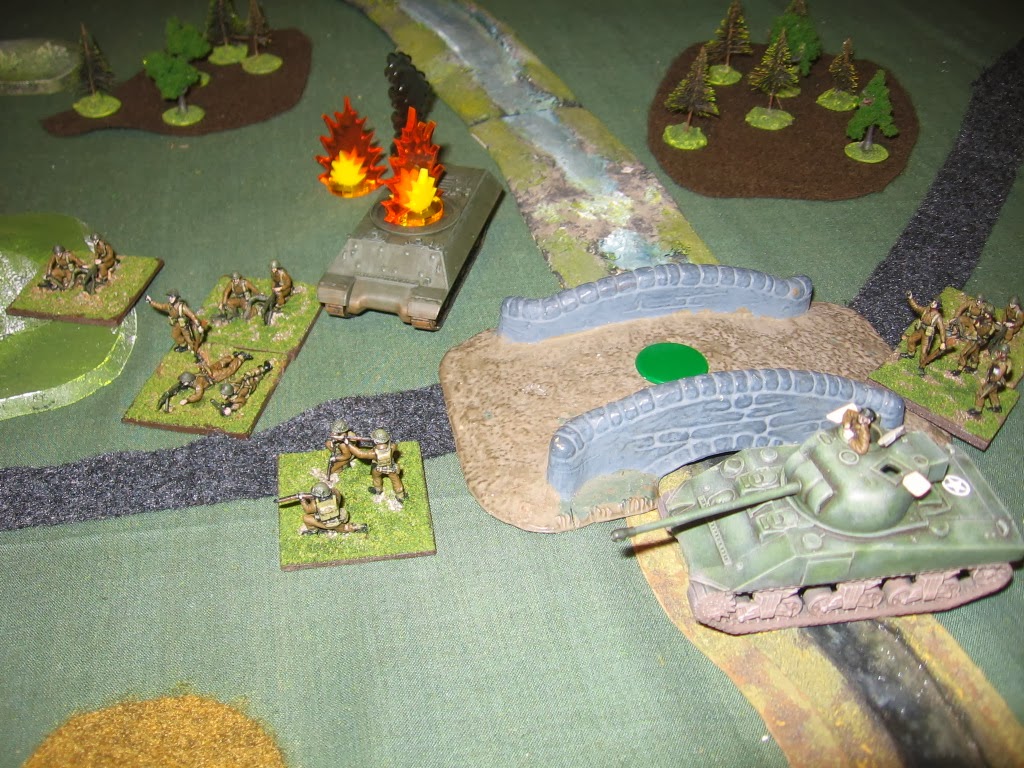 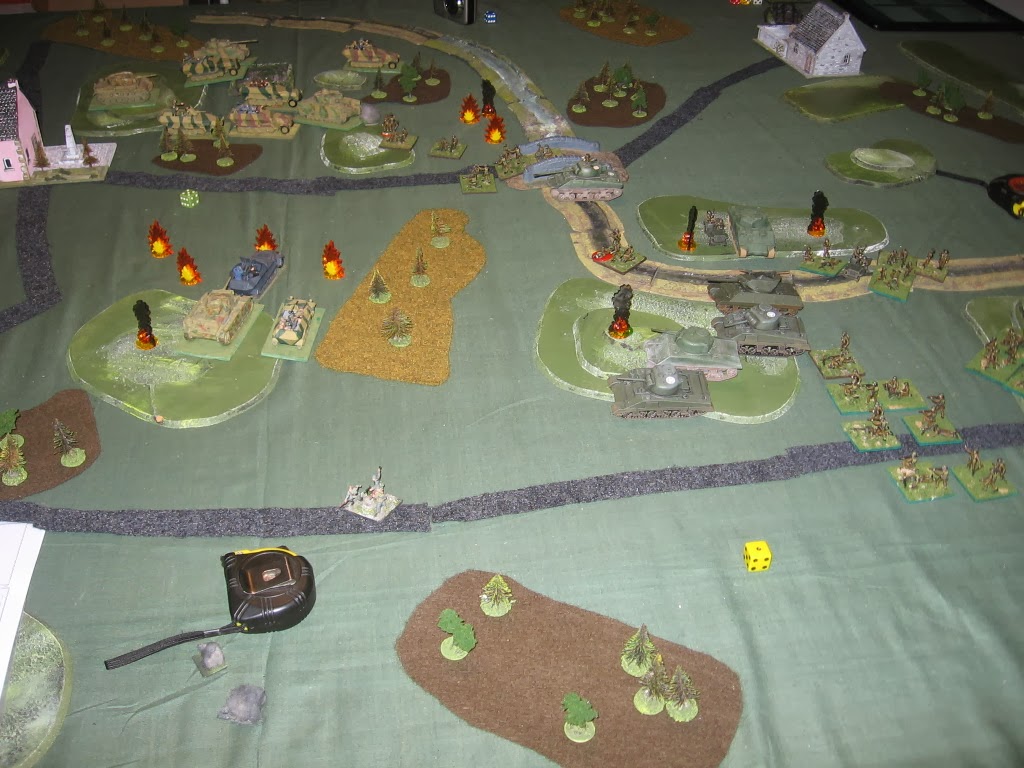 At this stage more effective fire from the British artillery in support of their left flank eliminates two platoons of armoured infantry, forcing a morale check on the German centre battalion. It fails.

At this stage we call the game. Nick has accrued eight victory points (he holds two objectives and has reduced two German battalions below half strength). I have accumulated four from the two objectives that I still hold.

The New Zealanders have cracked the German line and forced the river crossing (albeit a shallow running stream).

I remember it well. It was one of those years when I was marking external examinations: 900(+) Level 1 Economics papers. You have to watch your motivation, you know. I'd set myself a target, and had decided in my own mind that when I reached that target I'd give myself a small reward: I'd go to the local GW supplier and purchase a couple of their 'Harpies' (from their Dark Elves range) as flyers for my Chaos HotT army.

I painted the flesh, but at that stage the old motivation disappeared, and they have sat on my painting table for (probably) 5 years + awaiting completion. Today was the day .... 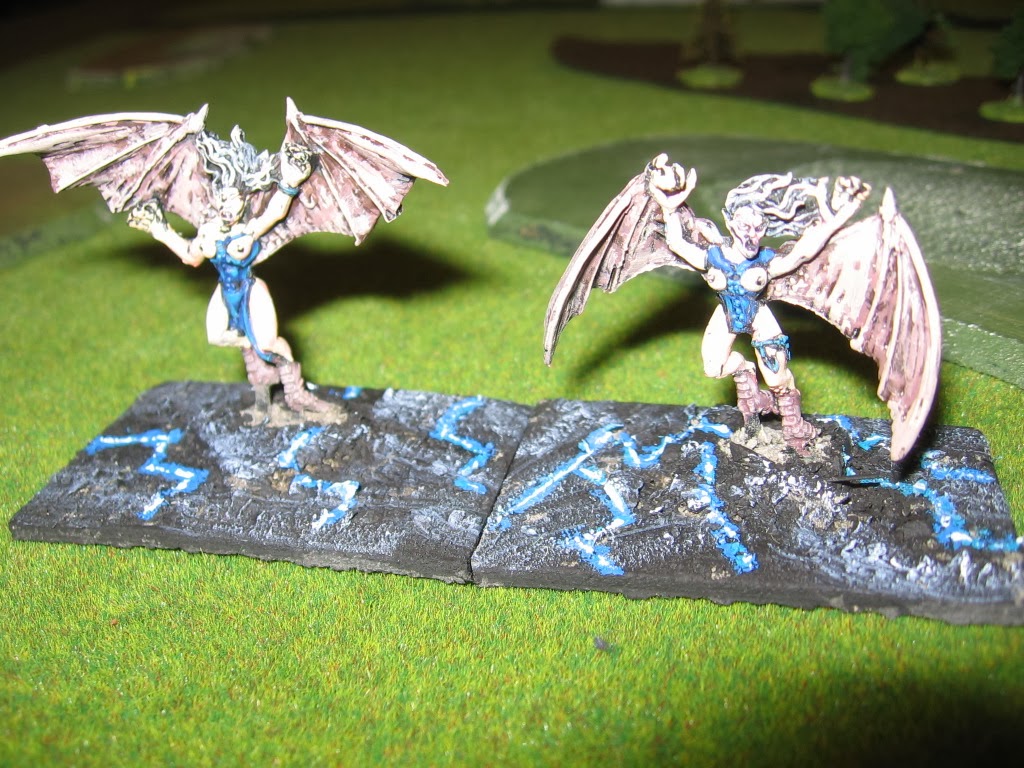 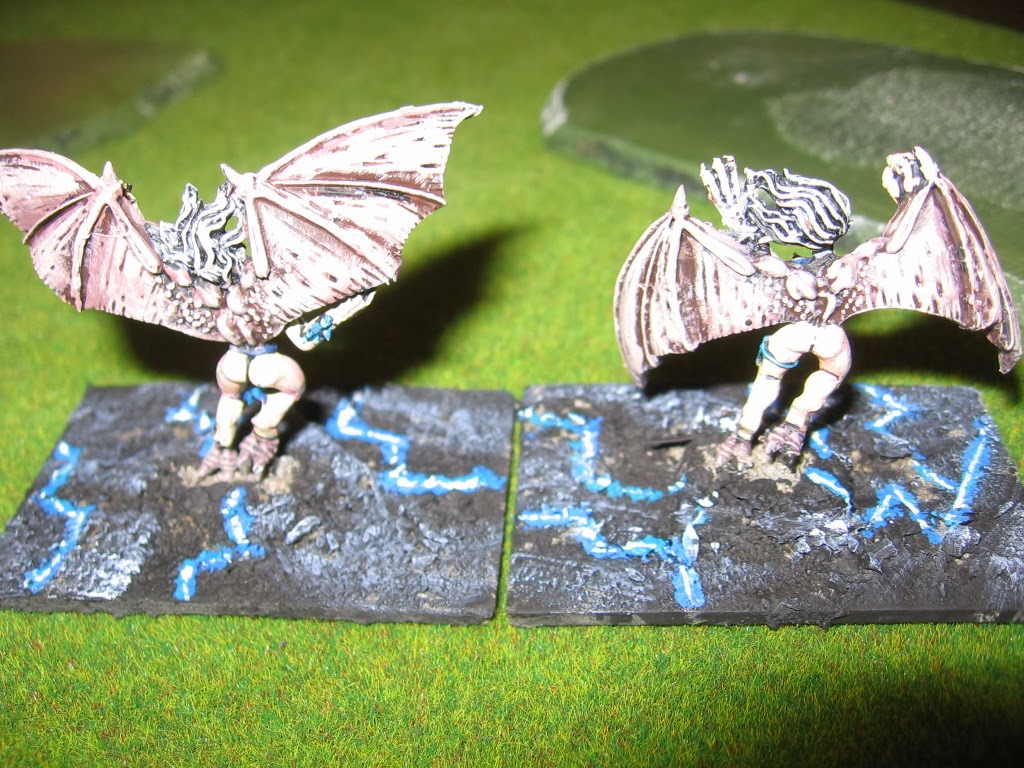 I grabbed another box from the games room pile, determined to continue to reduce the number of boxes I'll have to pack up and transport to temporary accommodation. The Nitto M3 Halftrack and Jeep seemed like a good next project. After all with Americans in 1944 you can never have enough M3 half tracks for those mechanised infantry. 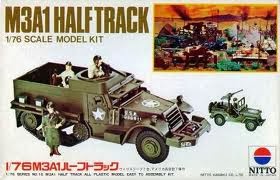 However instead of an M3 and a jeep, I found sprues for five..... yes that's FIVE .. Willys Jeeps. Checking the Spearhead OOBs, I could see the opportunity to use four of these anyway as HQ and recce vehicles. For some reason (it might be the relaxed 'holiday' state) I decided that I'd put a little effort into basing them, since they are small enough to sit on bases that are the recommended 1.25" wide (albeit a little deeper). 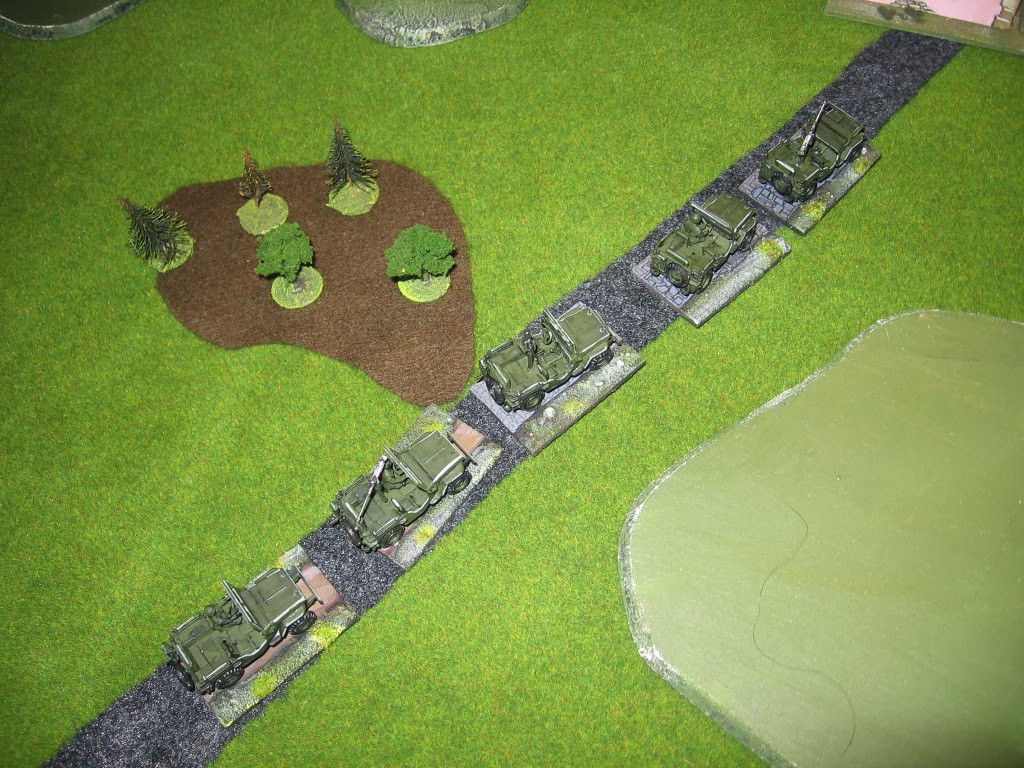 I decided to put three of them on 'cobbled' roads (yes the colour isn't quite right but you get the idea). And those cobbles are all hand drawn!!! 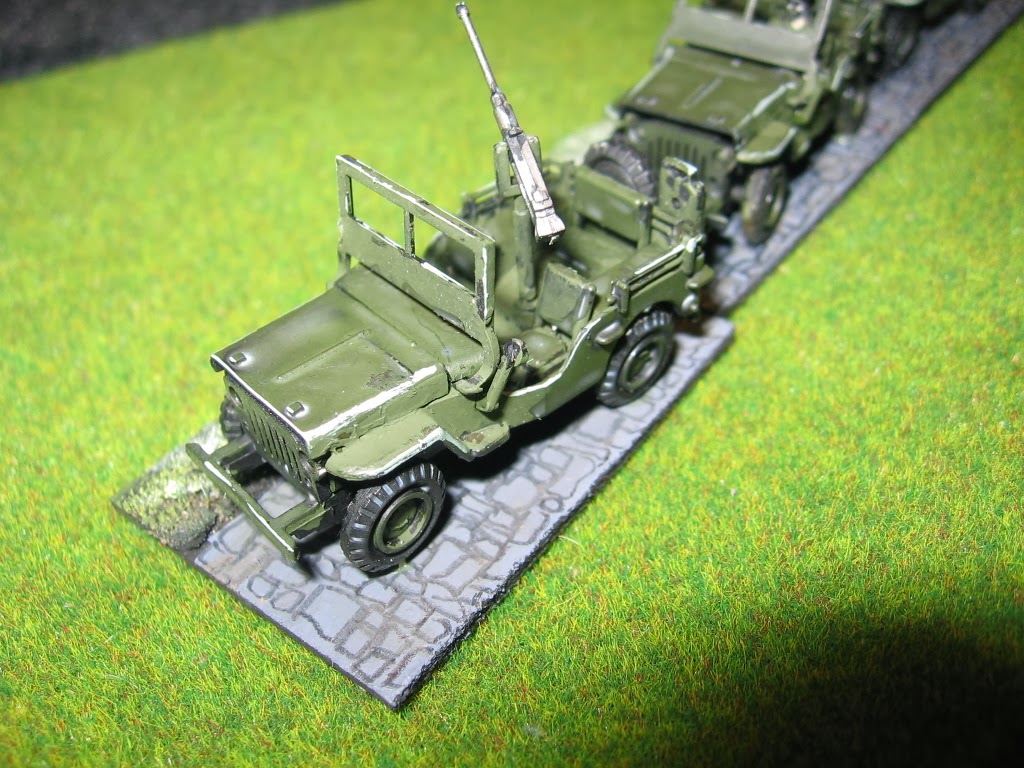 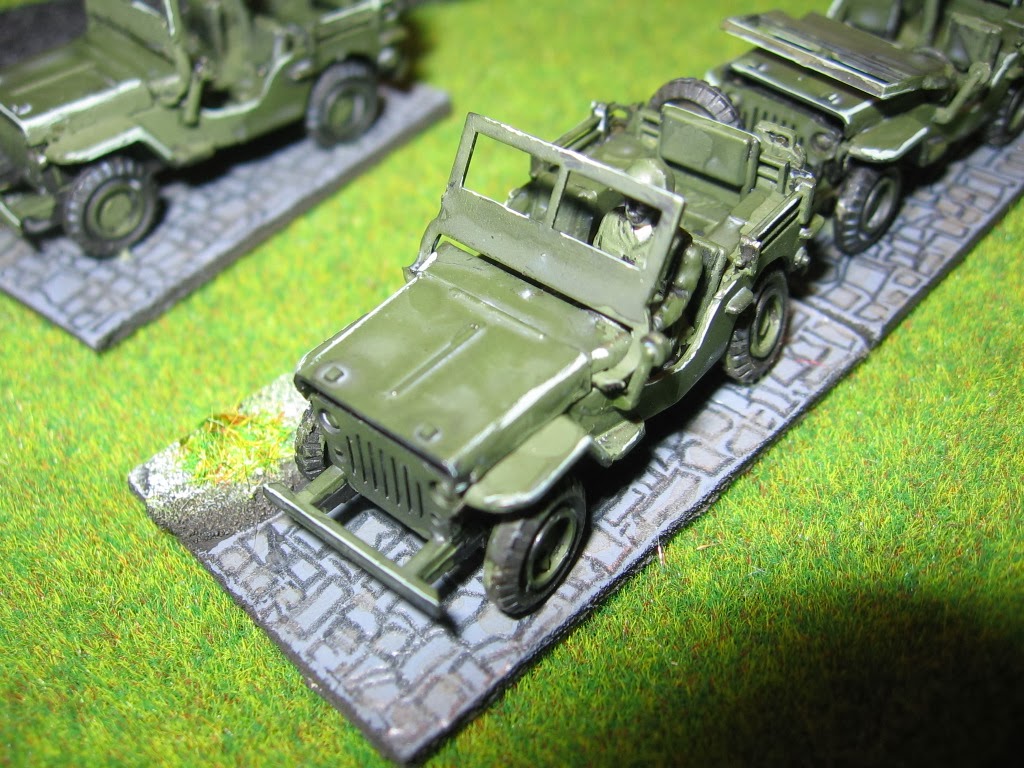 The other two are on packed 'dirt' roads. 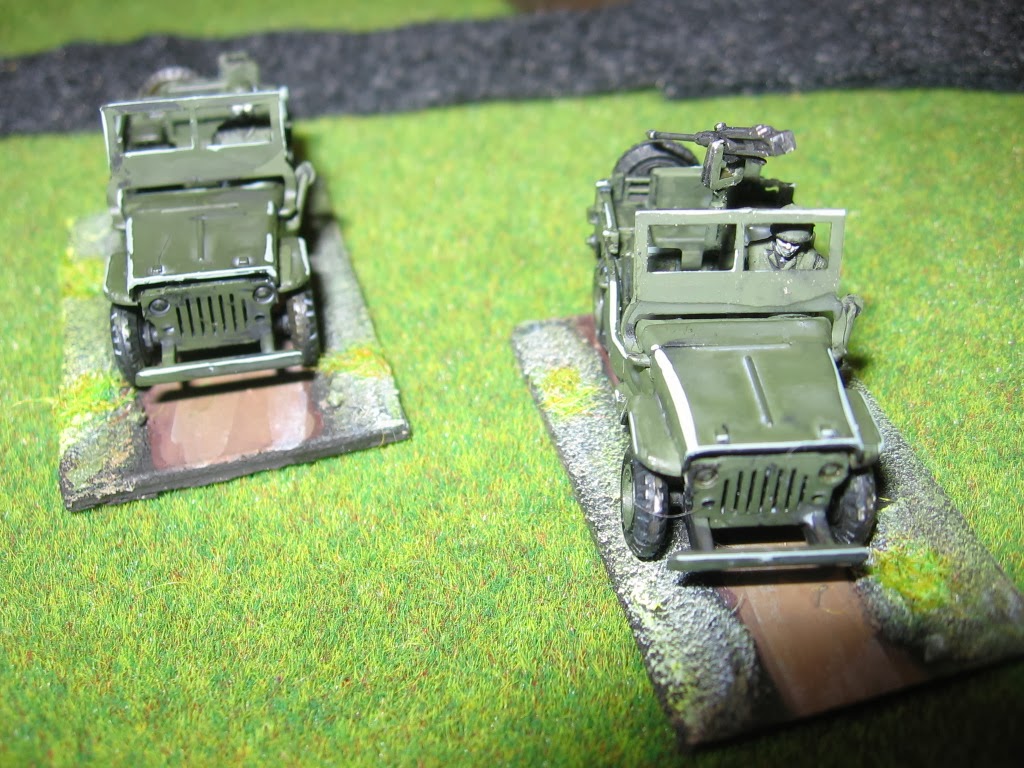 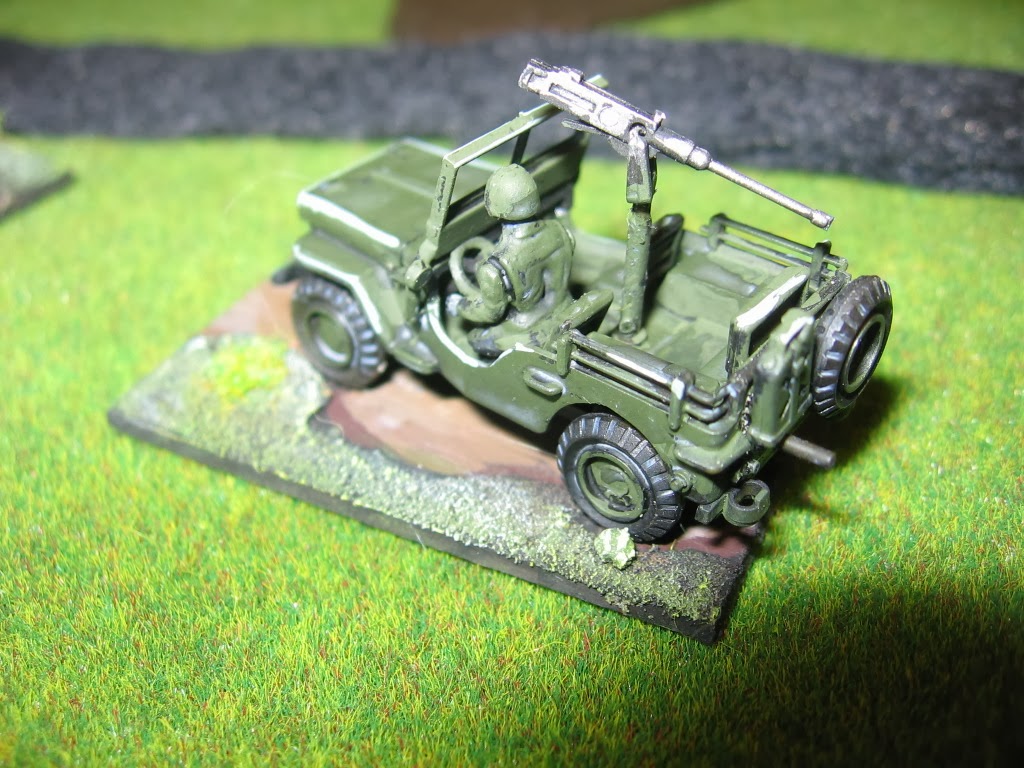 I must have been given these by some wonderful gaming colleague quite a few years ago; I don't recall getting them. A few smaller parts had been 'robbed' from the sprues, so there were only three 0.50 cal HMGs, and three drivers.

M16 MGMC - AA cover for the 20mm Americans in Spearhead


Years ago I bought this Matchbox kit for our son Nick. At that stage he was keen to paint a US army for play with the Rapid Fire rules. The enthusiasm waned, and the kit, along with several others, and Nick's nicely painted infantry, have all sat unused. 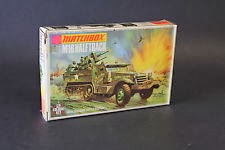 Working my way through the boxes in the games room (all part of the "reduction in boxes" programme pre demolition, you understand) I dragged this one out and set to with the painting and assembly.

Most of the kit went together really well, but I couldn't 'get my head around' how to assemble the guns to get the classic quad cannon look. Consequently they are aligned rather than being set in a rectangular group. 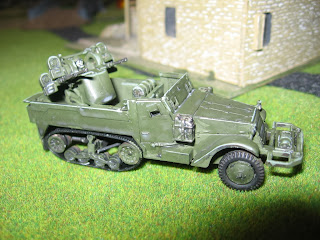 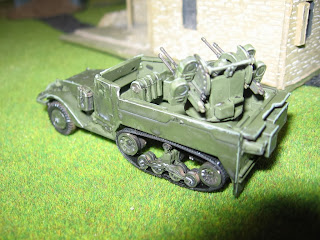 However the vehicle will provide AA cover for the US Spearhead army.

The kit also came with this nice looking piece of terrain .. a piece of rail line in a cutting, with a bomb crater in the middle. It seemed a shame not to assemble and paint it. 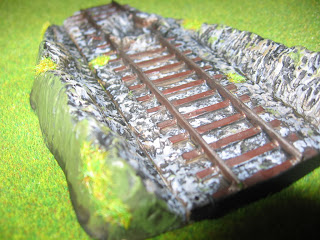 Here is the vehicle posed as per the kit's box art. 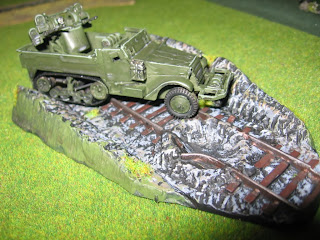 I may still try to take the guns apart and reassemble them, but that may require a degree of motivation that I just can't find right now.
at January 05, 2014 5 comments:

A few additonal photos of the Austrian advance on Lodz


A few photos of the Austrian advance towards Lodz that I didn't use in the AAR on 'The Great Adventure'.

I've never actually belonged to a specific history/wargames group other than the local wargames club but I've often eyed up both the Society of Ancients, and the Society of Twentieth Century Wargamers (SOTCW) as possibilities, thinking that someday I should.

Before Christmas I finally did .. join, that is.. and specifically the Society of Twentieth Century Wargamers.

Two days ago a parcel arrived with four back copies of their Journal. Their subscription year is almost ended, and so I received these four copies with one of two more to go to complete the year. 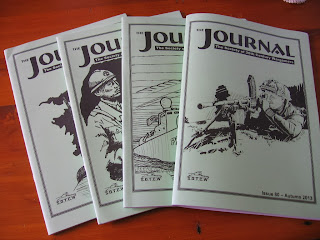 The content is interesting and varied, with my rules set of choice for the twentieth century (Spearhead) featuring in each issue in one form or another. The latest for example has some mods to WW2 Spearhead to cater for the Spanish Civil War, while earlier copies have included scenarios for WW2 play.

I think this will be worthwhile association. The organisation looks like a pretty typical voluntary outfit, which means that things are not perfect, and of course it looks as if the workload falls on the few willing people, as always.

I may consider writing something for the Journal, as their biggest issue seems to be finding content.

With 2014 now with us, it looks as if upping the ante with WW1 content might be the order of the day. We'll have to see.