It was 1861, and a "belle" of southern ladies had gathered on the highest hill hoping to gain some fleeting glimpse of their handsome young beaus as they strode gloriously into battle, intent upon giving those impudent northerners a darned goood thrashing.

The northern army under MacDowell had marched south with the intention of taking Richmond, and Beauregard had moved his forces north to counter the thrust. Beauregard's advanced guard had marched up the valley towards the town of Hillsborough, with second division on their right as flank guard. The left flank guard seemed to have been left far behind in the enthusiasm of the advance. As they moved along the heights, sending a brigade into Hillsborough, lines of blue could be seen advancing in the distance. 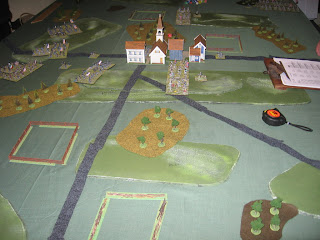 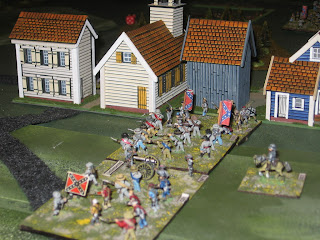 The right flank guard moved up intot he woods adjacent to Hillsborough, but the Union commander had been watching the grey advance with interest, and had sent two of his divisions on his left towards the same cluster of woods. Musket shots began to ring out through the trees, and a veil of gun smoke wafted through the branches, creating a sense of confusion before battle had even been joined. In this confusion a brigade of grey on the extreme right of Beauregard's army began streaming backwards. Even worse, an entire battalion of Beauregard's valuable bronze 'napoleons' fell to the Union forces, the ultimate dishonour for any gunner. 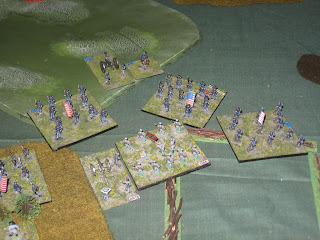 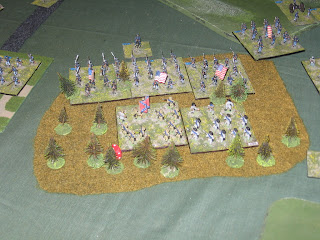 In the meantime the Confederate centre held fast with it's own flank now resting firmly on Hillsborough. 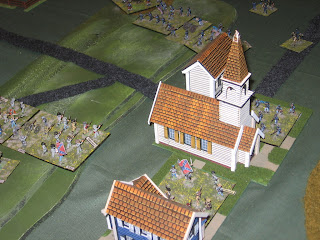 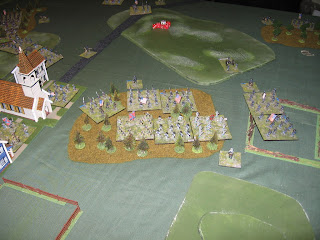 Sensing the opportunity, Beauregard had sent his main force on a longer march around to his left, and three brigades now appeared to threaten the Union right. 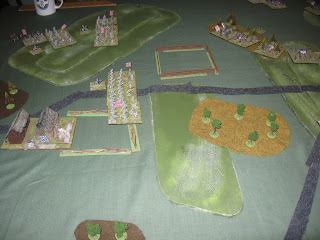 But MacDowell had seen the threat and one of his divisions was sent into the woods on his own right to hold the flank. 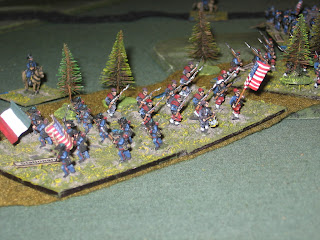 The grey tide advanced rapidly ... there was fighting to be done. 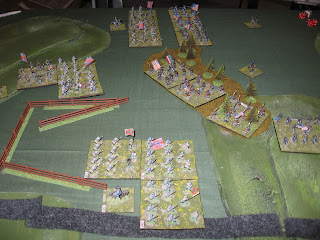 The Confederate divisions moved up quickly and a vicious firefight began on the Union right. The Confederate infantry quickly gained the ascendancy, sending several Union brigades streaming from the field. The ladies on the hill clapped their approval, and there were delicate mutterings of "My, did you see that? Why I do believe that was the 3rd Virginia." 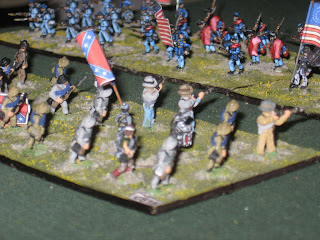 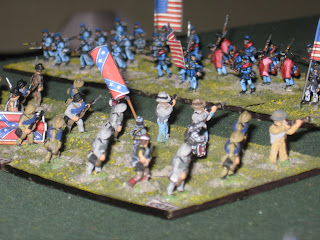 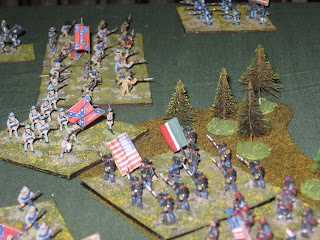 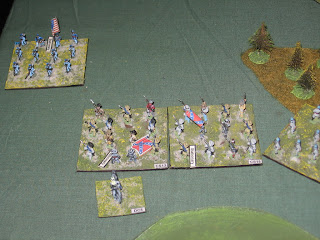 Seeing his right flank disintegrating, Macdowell ordered one of his victorious left flank divisions across to prop up his right, but this would take time. 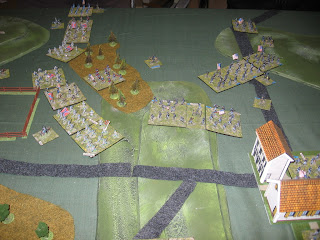 As the right steadied, MacDowell pushed on towards the Confederate centre, and Beauregard withdrew his centre forces, leaving a garrison to hold Hillsborough. Meanwhile the Southern ladies had long since abandoned their own positions on their hill as a cool evening breeeze began to cut across the battlefield. 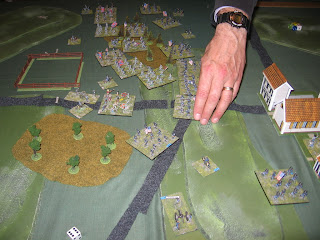 After 8 hours of furious fighting night shed its veil of darkness across the battlefield, and the forces of both armies fell exhausted in the positions they had fought so hard over during the day. MacDowell's forces were certainly in no condition to take Richmond. 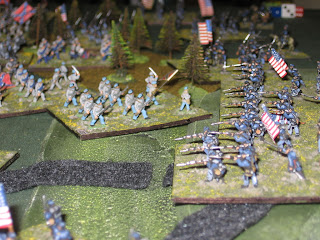 What would the 'morrow bring?

This American Civil War battle was a fictional scenario fought by Adrian, Andy, Andrew and me using Frank Chadwick's 'Volley and Bayonet' rules (2nd Edition). We were using my 15mm armies (mostly Freicorps figures). The buildings were scratch built by Adrian.

The battle was a typical 1861 battle, many of the troops were, in VnB terms, poorly trained, morale 4, with a scattering of morale 5 troops across each army.

An Epic Titan joins the ranks ...

A few months ago Adrian gave me an Epic scale Titan (a Warlord Titan). It came from the Old Space Marine set which, if I understand it correctly, was the first edition of Epic (feel free to correct me there). I have a couple of Scout Titans (yet to be assembled), but I'm not  a 'power gamer' so hadn't really planned for a beastie like this. Of course once you have one, two things happen:

1. You can't help painting it, and
2. You realise that one may just not be enough.

Anyway, I sat down last week to paint the beast (all a part of my painting catch up strategy). I chose to use the same colour scheme I used for my WH40K Space Marines, I thought it was suitably 'gothic': a combination of papal purple, and bronze/brass. Here is the finished result. 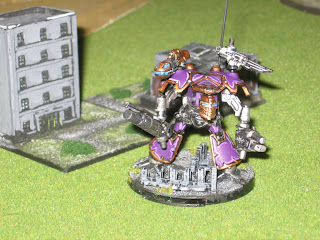 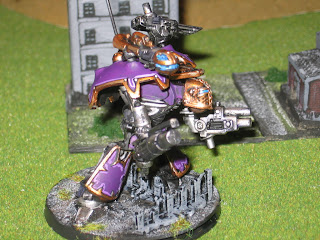 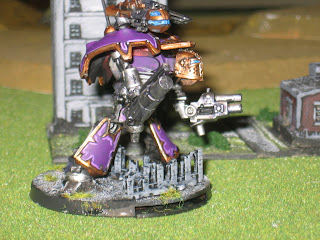 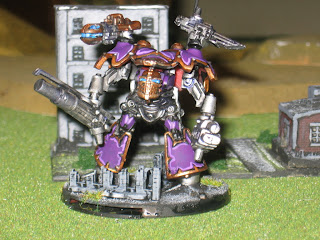 Certainly Titans are very emblematic of the 40K universe.. I have no idea how effective these things actually are in Epic (I haven't re-read the rules, nor played a game, for several months), but they certainly look the part, and for larger games I almost feel that it's obligatory to have a Titan on the table top.
at September 22, 2011 3 comments: