Finishing and starting.. all in one!

My interest in 40K first arose 10+ years ago when I watched College boys playing, and figured that they weren't doign things quite correctly. I was right, and we improved their game, although this still doesn't rank as my favorite game. However,  the miniatures are great, and back in 2002 I bought some figures to start a Lost and the Damned force. Typical 'gamer's story: I can't even claim that they are unfinished, more like unstarted, with the figures still in their shrink wrapped boxes. The Imperial Guard troops I bought were always intended as allies for Grey Knights, until the rules systems changed and in theory I wasn't allowed any more. Of course since I don't play the tournament circuit I guess I can do anything my opponents and I like, really.

That's the long way to introduce my latest 'finishing' project. I had a box of Imperial Guard heavy weapons, needing one auto-cannon to finish a heavy weapons platoon, leaving two weapons spare. So, I set to painting the three heavy weapons - one an auto cannon to add to the G army, the other two to be the start of a Lost and the Damned force.. well, traitors actually.

Here is the new auto-cannon, along with its two mates, all ready to go as a heavy weapons support platoon . 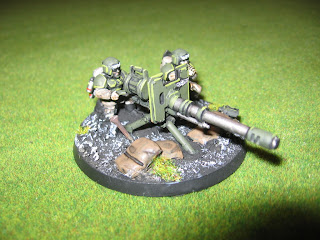 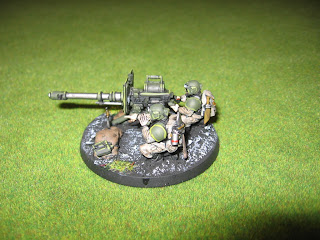 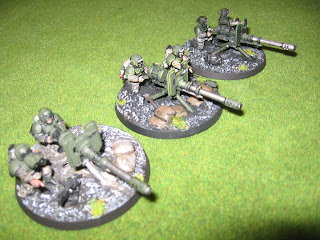 Now to that Traitor force .. here's how I'd imagined it. This is polyglot mixture of .. well .. traitors. An assembly of men from different units who have been brought together by traitorous intentions. How best to represent this visually? Simple, give them a range of camouflage uniforms to show their diversity.

So, here is the first part of the project (more of a painting project than a 'gaming one, I suspect).

The crew have standard Cadian, jungle and urban camouflage uniforms. 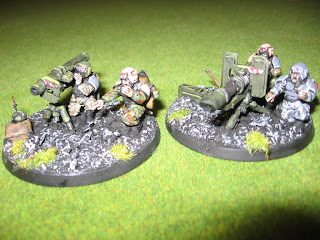 I looked back to an earlier White Dwarf magazine to find their easy guide to painting camouflage patterns, and set to work. I'm no Heavy Metal painter, but I was pretty happy with the camouflage patterns. Now I'm looking forward to the traitor platoons themselves. I may use the 'Eye of Terror' codex army list, or this fan based one.

The "finishing" bug maintains its momentum. Motivated by the fantastically enjoyable 1944 Spearhead game this weekend with Keith, and the realisation that there are some divisional elements that I hadn't added (and I thought I'd finished.. ha!) I've grabbed some 6mm equipment 'off the shelf', and based and added some reconnaissance elements (3 Staghound armoured car squadrons), some heavier tank support (three Challengers that can be used in place of the Achilles, if I recall correctly) and 3 Bofors AA stands. 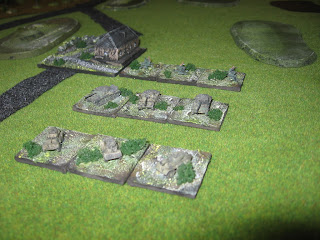 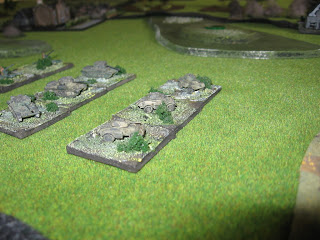 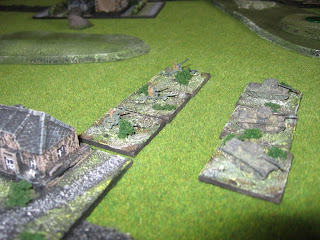 A symptom of the 'wargamer's disease.. I've had the vehicles for years (the result of one of those 'aspirational purchases from 20+ years ago I think - love that phrase, thanks Andrew) and I was able to pluck the vehicles from the shelf and base them. The slightly frightening thing is the number of 6mm vehicles still sitting on that shelf, unbased and unused. I should get rid of them, but.. well,.. you never know, one day you may just need them, as I've found with the nine stands above.

Next 'finishing' project... some Imperial Guard weapons and vehicles. I don't play a heck of a lot of 40K myself, but this year my College wargames group has several players new to the hobby, so my collections are well used and need extending. I've had the models for quite some time, it's time to get them finished.
at June 03, 2012 4 comments: