A brief update on the expansion of the 1914 Russian forces. Below are photos of the first two regiments which represent half of the fighting stands in a Great War Spearhead division. 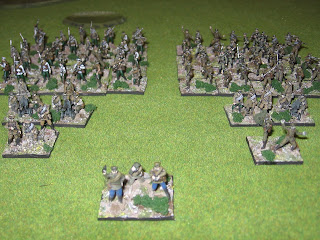 This first regiment is painted as a 'conscript' regiment might have looked with old 1904 issue green and white clothing left over from 1904. 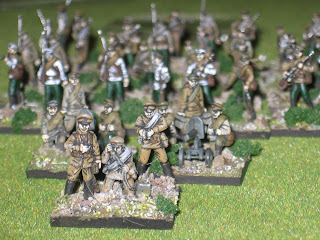 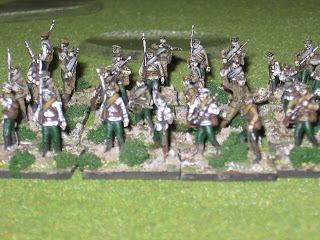 This second regiment is painted more 'conventionally' in the regulation 1914 'khaki green'. I have made a conscious effort to vary the shadings of the 'khaki' to represent the vagaries of massed production of dyes and uniforms, and the varying rates of fading of the fabrics. I achieve this by mixing small quantities of paint on the palette as I paint. I take a Vallejo British khaki brown, and blend in a little blue. The blue mixes with the yellow pigment in the khaki to give the greenish hue. 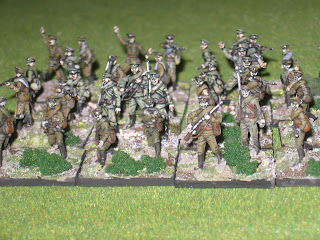 I make no secret of the fact that the Spearhead stable of rules rank only slightly behind Volley and Bayonet as my all time favourite rules system. I play Great War Spearhead, WW2 and Modern Spearhead. When friend Nick G was around for a game recently he spotted the WW2 Spearhead rules set on the shelf and after a browse asked if we could try a game. Now I play WW2 SH in 6mm, while Nick odes his WW2 (mostly Crossfire I think) in 20mm. He asked if SH could work in 20mm. Now infantry are fine, but we did discuss the ground scale distortion that occurs with the larger 20mm vehicles. Despite this, we decided to give it a try. I set up a small 'training'; game with a battalion each of 1944 Germans and British. The Germans were supported by a small unit of 2 PzKwIIINs and the British battalion was supported by a 6pdr AT gun.

Nick took the Germans. The tanks advanced down a ridge line in the centre of the table and bumped straight into an infantry company. Further to the rear the 6pdr was sited in support. A combination of platoon AT fire and the 6pdr fire destroyed the tank platoon.. dashed good luck, but Nick had learned the first lesson... make sure infantry and armour support each other. 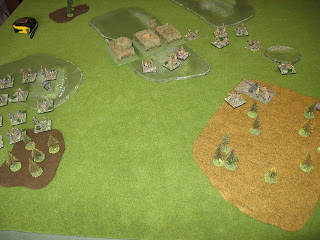 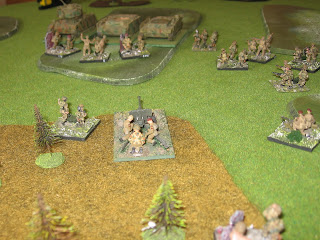 Nick's infantry advanced in a hook around the British left flank, although in responding to the armour threat I was able to re-orient the British defence to tackle the advancing Germans. 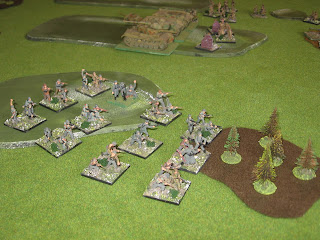 A bitter fight erupted as the two infantry battalions went 'head to head'. 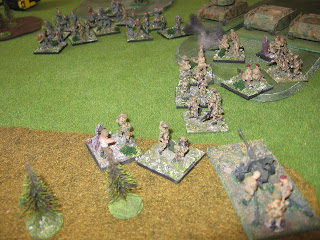 Trying to take advantage of German suppression the British close assaulted a German platoon, thinking that there was no other platoon available to offer fire support. However Nick's HMG was able to bring fire to bear and stopped the British platoon in its tracks. 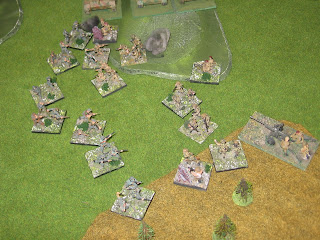 Bitter fighting ensued, but the Germans were winning the firefight, and it would soon all be over. 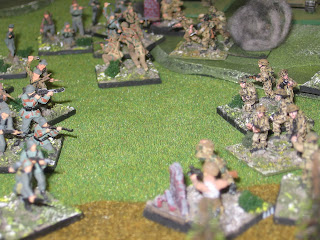 I am aware that others already play WW2 SH in 20mm, but for me it was something new, and it worked. This was a 'training' game for Nick with very small forces, and I still have my doubts about games with the more usual concentrations of vehicles where each side might include a battalion of armour, but it will be well worth trying. And I think Nick enjoyed it.. game on!!!
at January 04, 2012 2 comments: