Finally.... indeed a thunderous orc horde with the completion of my latest orc'ish additions for the HotT army. Arrrr there be orc chariots. These are old Airfix Ancient British chariots with the addition of the female orc'ish warriors from the Dark Alliance box of Orc warriors. 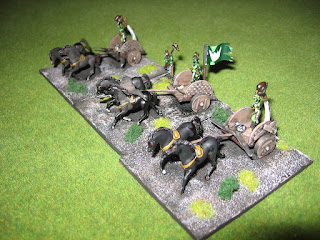 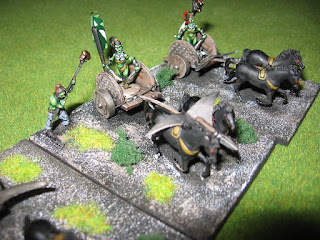 Dashed barbarians .. the impudence of them. Caruthers at his finest

It had been a long winter. For Major general Caruthers it had seemed to be interminably long, stuck at home on the estate awaiting the call from Horseguards. The dark dreary winter days had dragged, and the brandy stocks had taken some punishment. Finally however there had been the clatter of hooves up the long gravel driveway between the leafless oaks, the horses' breath steaming in the cold air as a rider in red jacket and blue breaches had clambered stiffly from his horse. The slide of leather soles on stone steps preceded the rap of the heavy brass knocker on the front door of the manor; the call to duty.

Barbarians. Barbarians, no less. Barbarians that needed to be taught a lesson for their impudence in thinking that they could stand against Queen and Empire. "Dashed impudence, nothing less I tell you, dashed confounded impudence" he had yelled as another brandy balloon hurtled across the room to shatter against the blackened brickwork of the fireplace sending a thousand cruel cutting shards of glass to scatter across the well worn tiger skin rug. It had taken great restraint to ensure that the balloon was empty before being launched on its path towards the fireplace.

So Caruthers had gathered his forces, asking for, nay demanding, that he be accompanied by his favourite nephew Lieutenant Winstanley. And so while Caruthers kept overall command of the forces sent to subdue the usurper, he gave command of the lancers and their supports to his heroic nephew.

Andy and Adrian commanded the barbarian forces, a combination of Andy's Spartacan revolt army, and a semi-historical early German army mostly warband with a Tree Ent behemoth. This was our first bigger battle HotT army, with 48 army points per side.

Caruthers deployed Winstanley on his right, with the lancers (Knights) supported by his Yeomanry cavalry (Riders) and several units of marksmen (Shooters), He also had that fine example of the Queen's technological best, HMSS Schmuck the wondrous steam robot in support. Winstanley rushed his troops forward with the impetuosity of youth, intent upon smashing the opposing barbarians with the lancers.
Caruthers had however had a heavy night in the mess the night before, and sat dazed in a semi alcoholic fog as he tried to make sense of the battlefield on the left. That is, I threw four '1's for movement pips for the left wing in the first five turns of the game, so the wing with two fliers and a magician was unable to do very much of anything, ceding the initiative to Adrian who opposed the wing with Spartacus and his revolt army.


Winstanley rushes across to support Caruthers, and orders his lancers to join him


Finally Dr Morgenstein, that clever scientist fellow, gets his wicked machine working and the air fills with magical energy. Spartacus disappears from beneath the very eyes of his troops. 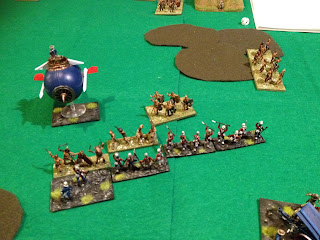 Whew.. what a battle. This is only the second or third bigger battle HotT game I've played and it was very different to the single 24 army point games (as you'd hope and expect).

The VSF left was hamstrung by the lack of movement PIPs for the first 5 turns (although I did overlook the extra PIP that the CnC effectively gets). The action on the right was a close run thing, as I'd got it into my head that the knights would attack foot with a factor of 4. I nearly came unstuck on realising that it is only a factor of 3 against foot. However there was nothing to be done but 'grasp the nettle' as they say, and get stuck in.

Andy and Adrian's two forces were disadvantaged as they only had one of the more powerful bases each (a hero in Spartacus, and the tree Ent behemoth for the early Germans). I think Andy will work on this to balance his forces with some additional 4 AP elements.

We all enjoyed this outing, and plan plenty more larger games.
at June 05, 2016 No comments: