In the beginning was the word. And the word was 'unholly alliance' (well, strictly speaking that's two words, but so it was - "Orcs and... Elves" aggggghhhhhh) and the word spread like ink on a blotter, like molten gold in a mould, from Dwarven Hold to Dwarven Hold. A new evil had arisen, and warriors from Dwarven strongholds from across the land came together to see the end of this new horror.


The field was clear, the 'unholly alliance' had been stopped, but at what cost. Many were the funeral songs that would echo through the Dwarven Holds for months to come, and many would be the grudges recorded in the Great Book of Grudges, awaiting revenge.

The game was fought using the Kings of War rules. Adrian wanted to give his ancient (literally, the figures are starting to suffer metal rot) elves, but didn't have enough figures to run a 1500 point army, and so he made up numbers using his orcs. I used my Dwarf army.
at May 22, 2015 3 comments:

Back in 2013 Adrian, Andy and I undertook a 40K Combat patrol 400 point painting challenge. You can see the results here.

The net result was the completion of my L&tD mutants, Adrian's Necrons, and Andy's Guard (well he didn't quite make 400 points. We didn't really want to start new armies, but the painting challenge certainly progresses projects, so this year it's a 40K vehicle challenge.

I've chosen a Defiler to give the L&tD a little more Chaos firepower, although frankly I a much more interested in the enjoyment of painting a very cool model. 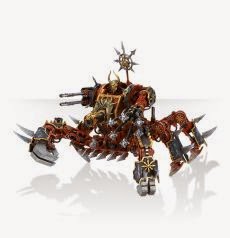 Andy is tackling a Dreadnought, and I haven't heard from Adrian yet.. I suspect something Dark Eldar'ish.

Hopefully we'll keep the blog updated with photos of our progress.
at May 17, 2015 2 comments: